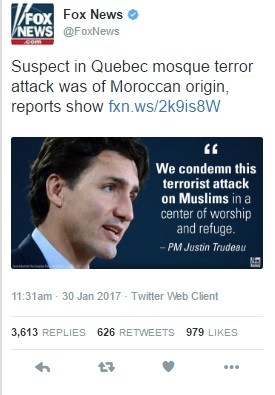 Fox News, which is essentially a hate organ of the Trump regime at this point is still propagating a horridly deceptive headline that disagrees with their own story claiming that a Moroccan was behind the attacks in Quebec.

Unbelievable deceptive headline from @FoxNews, while their own story in the link disagrees. https://t.co/uHcNbwZwfT

The Moroccan man initially described as a suspect by the media is now being treated as a “witness.”

At the intercept Glenn Greenwald and Murtaza Hussain reported the wildly inaccurate propaganda of the news media outlets and the false narrative they have been pursuing. Not surprisingly Trump’s press secretary also propagated the lie:

Almost immediately, various news outlets and political figures depicted the shooter as Muslim. Right-wing nationalist tabloids in the UK instantly linked it to Islamic violence. Fox News claimed that “witnesses said at least one gunman shouted ‘Allahu akbar!’,” and then added this about the shooter’s national origin.

White House Press Secretary Sean Spicer exploited the attack to justify President Trump’s ban on immigrants from seven Muslim-majority countries. “It’s a terrible reminder of why we must remain vigilant and why the President is taking steps to be proactive rather than reactive when it comes to our nation’s safety and security,” Spicer said at this afternoon’s briefing when speaking of the Quebec City attack.