By Jerlerup on February 5, 2017 in Breitbart Watch, Feature 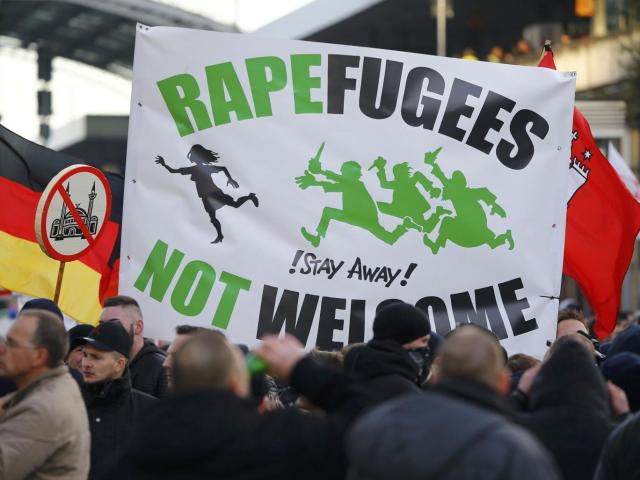 Pegida-Germany protest against refugees dubbed as “rapefugees.” It is a meme that has taken off on the right in Europe.

Is Sweden the “rape capital” of the world, as Breitbart and Islamophobes worldwide claim? What is the background to the high figures of reported rape in Sweden? Is it the so called “Muslim invasion of immigrants” that is responsible for it? Is “the Muslim rape culture” behind it? Or is it simply that Sweden has stronger laws against sexual offenses like rape, and that Swedish women are raised not to take shit!

I am from Sweden. When I went to school 30 years ago I heard about a case of two young white American exchange students who raped Swedish young girls. Many Swedes reacted with horror. Many blamed ALL Americans for the wrongdoings of these two. “All American white youngsters are like that, racists and rapists,” “USA is insane,” “Americans are rapists.” “Too much American TV-violence.”

Breitbart and Islamophobes worldwide do the same thing to Muslims. “Muslims rape women” they claim. “Muslims” are currently “raping” Europe, according to the Breitbart Senior editor Milo Yiannopoulos.

The so called “evidence” for this is the claim that the numbers of rapes allegedly is “skyrocketing” in Europe, and it is all blamed on Muslim immigrants.

It is worst in Sweden they claim. Sweden is a burning hell were “Muslims” rape, kill and burn down cars, they say.

Is Sweden the “Rape Capital of the Western World?”

Breitbart hates Sweden more than any other European country. Sweden is both a stronghold of feminism and a country that has accepted a lot of refugees, especially Muslims. And we all know that feminists, migrants and Muslims make Breitbart go bananas! Almost every time Breitbart talks about “Muslim rapeculture” in Europe they bring up Sweden as the worst case scenario. Sweden is the “rape capital of the Western world” it is claimed.

As “evidence” for this international statistics are cited. Indeed, according to those statistics a lot of rapes are reported in Sweden: 63,5  rape incidents per 100,000 citizens. The USA with 300 million people has 27. That would lead you to think that the numbers of rapes are skyrocketing but then you look at the figures. Sweden with ten million people has 5,960 rapes, Azerbaijan 16, India only 22,000, Lebanon 19, Mozambique 44! And Saudi Arabia claims that there is almost no rape, (and lash the raped women instead), Egypt has about 100 all in all, Canada 576. 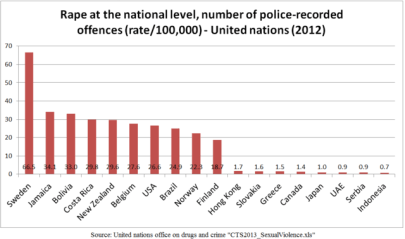 So what is going on here?

Does this mean that Sweden is unsafe for women, and that Saudi Arabia, Egypt and Mozambique are paradise for women?

Mozambique still has the old colonial laws that stated rapists to go unpunished if they marry their victims and stay married for at least five years. Saudi Arabia, well… Lots of women are raped but the legal system doesn’t seem to care about that. Egyptian law is not protecting Egyptian women very well.

The Swedish law considers lots of acts as sexual assault and rape that other countries don’t. There has been a lot of discussion globally about the case of Julian Assange. If you agree to have sex with a woman in Sweden, using condom, and you take it off in the end of the sexual act, without the consent of the woman, it can be regarded as rape. Sweden has strong laws against marital rape, and rapists can be convicted even if the wife herself doesn’t report the rape by the husband. There are proposed laws that will make sexual harassment online a crime, like sending unsolicited pictures of a penis to women. Sexual bullying at work is regarded as a crime, and if it involves physical contact without consent it might be regarded as rape.

In the USA marital rape is still not entirely regarded a crime in 13 states.

The second difference is that different countries report rape statistically in different ways. If one person rapes a woman 100 times it can be regarded as ONE crime in some places. In Sweden it would be reported by the police as 100 rapes.

There has been some discussion about this online.

Imagine, for example, if your boss rubbed against you in an unwanted way at work once a week for a year. In Canada, this would potentially be a case of sexual assault. Under Germany’s more limited laws, it would be zero cases. In Sweden, it would be tallied as 52 separate cases of rape. If you engaged in a half-dozen sex acts with your spouse, then later you felt you had not given consent, in Sweden that would be classified as six cases of rape.

That compares with only 0.6 in Colombia and 1.1 in Mexico.

So why haven’t we heard any of these horror stories? Are people being grabbed off the street in Sydney and Toronto, while the world turns a blind eye?

No, the high numbers of kidnapping cases in these two countries are explained by the fact that parental disputes over child custody are included in the figures. If one parent takes a child for the weekend, and the other parent objects and calls the police, the incident will be recorded as a kidnapping, according to Enrico Bisogno, a statistician with the United Nations.

And the third factor is that the focus on the rights of women has led to an increase in reported rapes to the police. Swedish women are more conscious about their rights and are not afraid to report sexual assaults or rape.

But aren’t refugees and immigrants responsible for a greater share of Sweden’s sexual assaults?

In a sense. Statistics show that the foreign-born in Sweden, as in most European countries, do have a higher rate of criminal charges than the native-born, in everything from shoplifting to murder (though not enough to affect the crime rate by more than a tiny margin). The opposite is true in North America, where immigrants have lower-than-average crime rates.

Yes, you read correct. Immigrants have higher rates of criminal charges than natives in most of Europe, but in the USA it is the opposite. (We´ll have to return to this fact some other day.)

Sweden doesn’t have statistics that cover the descent of convicted rapists. Denmark, the neighbouring country, has it.

Denmark is one of the countries that has “skyrocketing” rape figures according to Breitbart. Well there certainly is a statistic overrepresentation of immigrants in the rape statistics. The Danish paper BT reported some years ago that three times as many with immigrant background are sentenced for rapes than those with Danish background. That sounds scary, right?

Lets look at the statistics. This is from 2015. The first headline is about crimes that have to do with sexual assault (Sexualforbrydelser). The second headline deals with rape (Voldtaekt). The statistics show the number of convicted per year and their descent. 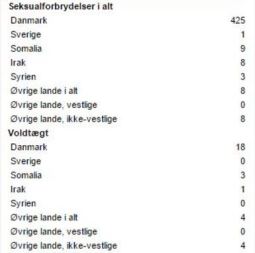 There are differences between Denmark and Sweden, but not big ones What is true for Denmark should be true for Sweden.

The irony is that Breitbart hates feminism and the concept of equal rights for women. Feminism makes women look ugly, they claim. They have written several articles ridiculing women that have reported about rape and sexual assault. Just search on Breitbart and you´ll see: Rape+hoax. Rape+fake. Rape+lie.

Breibart makes fun of rape victims, and claims there is an inflation in fake rape allegations. But still they claim to be concerned about so called “Muslim Rape.” Hypocrisy!

There are a lot of problems still in Sweden and Denmark with oppression of women, and with rape and sexual assault and some immigrants bring with them a view of women that is not acceptable to most Swedes. But that does NOT justify slanders against all immigrants or Muslims.

Not the first time

It should be emphasized that there are many similarities between the current hatred against Muslims and the way Jews today, and historically, have been slandered and hated,

The Nazis spread the same lies about Jews in the 30s, as Breitbart spreads about Muslims today. It was claimed that there was such a thing as “Jewish Rape Culture.” Especially the magazine Der Sturmer was famous for spreading these kinds of lies. 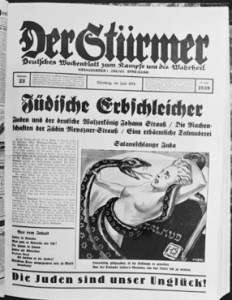 In the 1930s it was claimed that Jewish refugees from Eastern Europe were overrepresented in the criminal statistics of Germany. That might be true since they were socioeconomically poorer that native German Jews. In the same way as Breitbart does today, the nazis claimed that this was “evidence” of “Jewish criminality” and “Jewish rape culture.”

Sweden, and the Nordic countries are on the top of the list of countries where women have the most rights, where there is most equality between genders.  There are problems, but lets solve them without blaming all Muslims and without spreading lies.