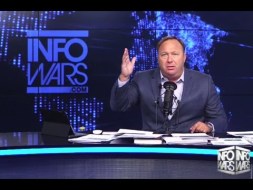 Besides Breitbart, Inforwars is another one of Donald Trump’s main sources of news and information. The connection between Trump and Infowars makes me wonder if Donald believes that some humans are alien lizards too, as Alex Jones do. Does the American president believe that some of the world leaders he talks to are lizards dressed  as humans?

President Donald Trump claims that 3 million votes where cast by illegal immigrants. All of them apparently voted for Hillary Clinton. His source for that allegation is Infowars.com. Donald has agreed to be interviewed on Infowars and tweeted “news” from Infowars. Inforwars is no longer a fringe source of bizarre propaganda. Infowars is respected by the President of USA.

Trump claims to have witnessed that Muslims celebrated in New York when the twin towers were brought down by terrorists 2001. That claim was published in an article on Infowars in 2001 and retweeted by Trump. He links to an article in Infowars. 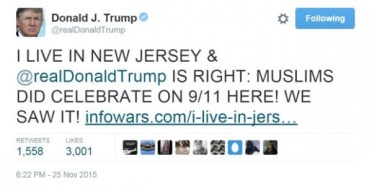 There were individuals (from various communities) that “celebrated” in the USA. No doubt. But no evidence or facts has ever been presented about hundreds or thousands of Muslims that allegedly celebrated in or around New York City when WTC collapsed. This is a FACT. Rumours spread by people that hate Muslims, or hearsay is NOT facts. Besides that, 60 Muslims died in the attacks on 9/11 so the Muslims were busy grieving their dead not celebrating. Thousands ran for their lives that day. Radical extremists are killing tens of thousands of Muslims every year. They are victims of the extremist terror too.

As for Alex Jones and his Infowars. Well, I still remember listening to his broadcast after 9/11. He talked about alien lizards that were a part of the conspiracy to attack the USA on 9/11. This is something that he has not talked much about since. But the aliens are still a part of his worldview. It is the conspiracy to “replace men with machines” and to make the Muslims “burn down all of Europe”, let them “invade the U.S.A,” and make the ruling elite “Gods.”

Alex Jones is “joking” that Hillary Clinton is an alien lizard who gave birth to aliens in a glass of water. Hardly a joke, since Alex truly believe Hillary has reptilian, alien, DNA.

“I warned Mr. Trump to be careful of shape-shifting reptilian aliens trying to infiltrate his campaign,” said Jones on his radio show “Info Wars.” “I believe that many of Hillary Clinton’s health problems are down to the fact that her reptilian DNA is having a hard time adapting to our environment.”

He also believe that Hillary Clinton is a demon, but that is not a joke for him. Look at this!

And the health care reform of President Obama was of course made up by the lizards. What do you think about this?

Alex Jones has featured David Icke on his show. David Icke is the antisemitic “mastermind” behind the claim that alien lizards are trying to take over the earth.

“Humanity is actually under the control of dinosaur-like alien reptiles called the Babylon Brotherhood who must consume human blood to maintain their human appearance.” (Icke)

A trustworthy source of information? Well ask Mr. Alex Jones to present the facts. There aren’t any, unless you believe that flies that land on a person are evidence of them being “demons,” or that reflections in a glass of water is evidence of people being lizards from outer space?!

The only question is if Donald Trump believes in this alien conspiracy theory too? I think that should be the next question asked at a Trump press conference!