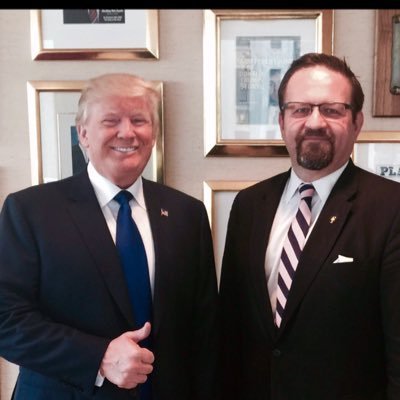 Sebastian Gorka, assistant to Trumpelstilskin, and self-styled “counterterrorism” expert is slated to have a ridiculously privileged role in influencing what Trump thinks about national security.  He swims in the same swamp as the other Islamophobes who are a part of the administration.

Recently, Gorka was unwilling to answer a basic question: “Does the president believe Islam is a religion?” Gorka’s non-answer:

Gorka spurned the question, telling Inskeep, “This is not a theological seminary. This is the White House. And we’re not going to get into theological debates.”

“If the president has a certain attitude to a certain religion, that’s something you can ask him,” Gorka said on the radio show. “But we’re talking about national security and the totalitarian ideologies that drive the groups that threaten America.”

The reason Gorka cannot answer the question is because the Islamophobes surrounding Trump, such as Bannon, Miller, and himself are ideological allies to the folks at hate blogs such as JihadWatch, FrontPage, etc. where the canard that “Islam is not a religion but a totalitarian political ideology” has been regularly propagated for years.

Loonwatch commenter, Mo, mentions the dangerous slippery slope intent that lies behind this view of Islam:

If they can ban us from following our religious law, they will eventually extend this to ban hijabs and even halal meat. Eventually they will extend this further to ban the congregation of any Muslims they deem to be “un-american”… whatever they decide that means.

They are attempting to roll back our freedoms one by one. This is how it begins.

In addition to this central point, Gorka’s allies, Spencer, Gaffney and the likes have advocated that the Sedition Act be used to charge Muslim Americans if they believe or proclaim to follow Shariah. That is the totalitarian intent behind the Islamophobic narratives they have pursued with such vigor over the years.