By Jerlerup on March 9, 2017 in Breitbart Watch, General 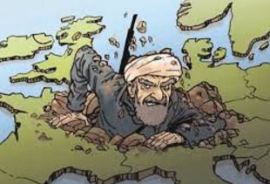 State-funded schools are required by law to hold a daily act of worship, what is known as “The Compulsory Christian school assembly.” Pupils must attend. These assemblies have faced a torrent of criticism, as a result a school board in Brent, London, in a first for state-funded British schools, decided that such assemblies at their school can be changed to inter-faith assemblies.

Breitbart wrote an article about this story recently. Why would an American “think tank” report about decisions in a small school board in Brent, London? Well, it’s kinda their m.o. They report about local events in remote places of Europe to SCARE the reader. It fits well with the overall theme of Breitbart, that Muslims and “multiculturalists” are destroying Europe and the Christian Civilization.

As can be seen in the comment section of the article the readers fear that this means the introduction of Sharia in British schools:

“Dechristianization” due to phantom “Islamization” is a favorite trope pushed at Breitbart, the aim of which is to fearmonger and aid the politics of Islamophobia. But this article has a twist. The main spokesperson for the decision is a Jew, not a Muslim. Breitbart writes:

Chair of the judging panel, Rabbi Dr. Jonathan Romain MBE, said: “Society may be Christian-based but is multi-faith with many also of no belief-system, and so uniform worship should no longer be compulsory for our educational system.

The current worship laws are unpopular and prevent schools from providing an inspiring programme of assemblies that are truly inclusive of all staff and children.

Some schools find the laws so unworkable that they have stopped providing assemblies altogether.

As society does not have a shared faith, we cannot worship together. Brent Council’s ground breaking approach rescues an opportunity for pupils to communally explore and forge shared values, in a way that is workable and respectful.

We hope all other local authorities will take inspiration from Brent Council’s approach, which we highly commend.”

And guess what!? The comment section is filled with conspirathorical myths about “Jews” behind the “Muslim invasion.” 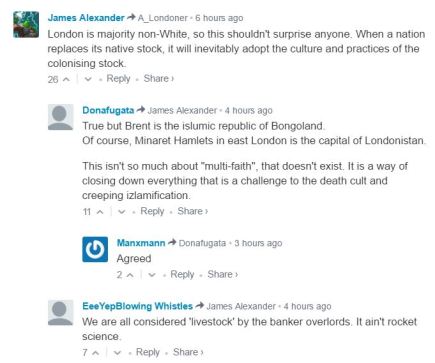 When islamophobes open their mouths, neither Muslims nor Jews are safe!

What are the facts behind the decision? It isn’t complicated. The assemblies have been criticized for a long time by atheists and people of other faiths that want to uphold “freedom of belief.” Listen to Rabbi Romain again.

Rabbi Dr Jonathan Romain, chairman of the Accord Coalition, which opposes faith schools, agreed compulsory worship in schools can be counterproductive.

“Assemblies have a vital educational role – at the best, they can bring a school together in celebration of common values, and can assist pupils in exploring questions of purpose, value and meaning,” he said.

“However, at their worst, they can enforce worship on children who either do not hold religious beliefs or who adhere to a different faith.

It’s as simple as that, and is not a part of an alleged Muslim-Jewish conspiracy to “Islamize” the west. But the Islamophobes don’t care about facts. Yet, despite all the fact we will continue to see the hate content generating sites such as Breitbart ramble on and on about the decision in Brent.