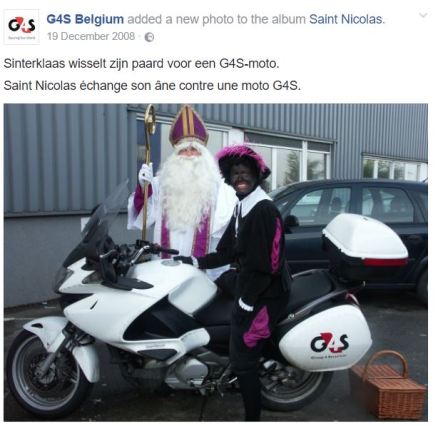 “Islamic headscarves may under certain conditions be banned in workplaces, and this ban does not neccessarily constitute “direct discrimination”, the European Court of Justice ruled last Tuesday (March 14th). Many Muslims are worried about this decision. In an increasingly hostile environment for Muslims, this ruling might lead to bans against “Islamic headscarfs” in companies all across Europe. But the court has violated its own principles. G4S and Micropole, the companies that fired the Muslim women carrying the headscarf are NOT neutral to religions, as both the companies, and the court claims.”

The ruling is based on two cases. One has to do with a Muslim woman that worked at G4S Secure Solutions in Belgium, an international Company.  The other has to do with Micropole, a French company. I will focus on G4S.

The court writes in its press release that the policy of G4S allegedly is to have strict religious neutrality. Especially in its external contact with its customers.:

“the management of G4S informed her that the wearing of the headscarf would not be tolerated because the visible wearing of political, philosophical or religious signs was contrary to the position of neutrality G4S adopted in its contacts with its customers”

“The court agrees with G4S that they can ban the headscarf, as long as they pursue this neutrality in a “genuinely… consistent and systematic manner”, as it writes in its formal judgement:

As regards, in the first place, the condition relating to the existence of a legitimate aim, it should be stated that the desire to display, in relations with both public and private sector customers, a policy of political, philosophical or religious neutrality must be considered legitimate.

An employer’s wish to project an image of neutrality towards customers relates to the freedom to conduct a business that is recognised in Article 16 of the Charter and is, in principle, legitimate, notably where the employer involves in its pursuit of that aim only those workers who are required to come into contact with the employer’s customers…

It must be held that the fact that workers are prohibited from visibly wearing signs of political, philosophical or religious beliefs is appropriate for the purpose of ensuring that a policy of neutrality is properly applied, provided that that policy is genuinely pursued in a consistent and systematic manner

But when looking at the case one can easily find that someone has done a sloppy job. I don’t know if the lawyers representing the woman or the court have been sloppy, but someone has made a lousy job.

G4S is NOT neutral.

G4S celebrates Christmas in Europe and all over the world. As can be seen on their international Twitter and Facebook pages. You can even find some cute animated holiday greetings sent out to customers: CLICK HERE!

The Dutch and Belgian celebrations are even more directly connected to Christian faith. Two years after the woman was fired from G4S, the company posted this holiday celebration on their Facebook page:

This is a regional Christmas celebration and an old Dutch tradition.

Santa Claus is called Saint Nicholas, or in Dutch Sinterklaas, potrayed as a bishop and a Christian Saint. Next to him we have Zwarte Piet that traditionally is the companion of the saint. Zwarte Piet is a blackface figure, i.e.a white person that is painted black. Zwarte Piet is said to be black because he is a Moor, i.e. a Muslim, from Spain. Zwarte Piet was earlier seen as a “servant” or “slave” of the white bishop and saint.

Zwarte Piet is a local tradition that many view as racist. However, that is not the subject of my article today. G4S is clearly not neutral, Sinterklaas and his servant the Muslim is a CHRISTIAN tradition.

Lets continue to look at the G4S on social media. Here are some examples. Keep in mind the words of the court:

G4S regularly wishes Happy Holidays during Christmas. It is a part of their externally oriented PR to send Christmas Greetings and decorate its office when it is Christmas. 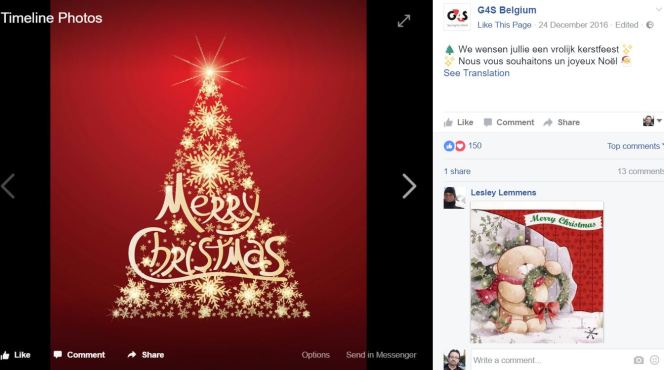 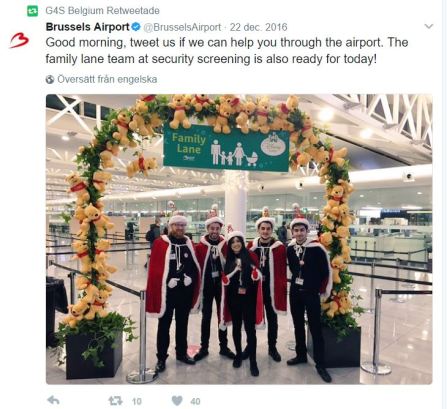 Internationally G4S is not neutral either.  We have already seen the animated Holiday Celebration. 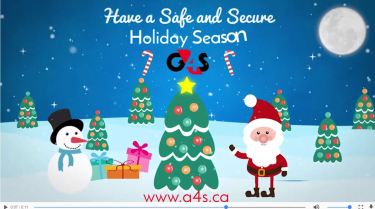 Here are some examples that shows that G4S celebrates Christian Holidays, like Christmas and Eastern Holidays. 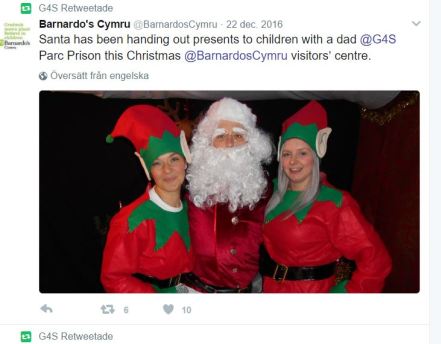 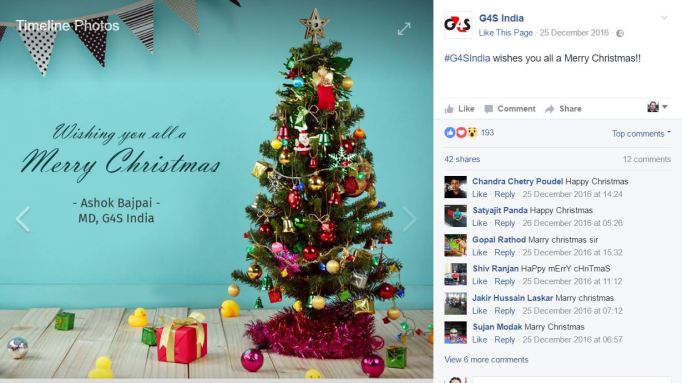 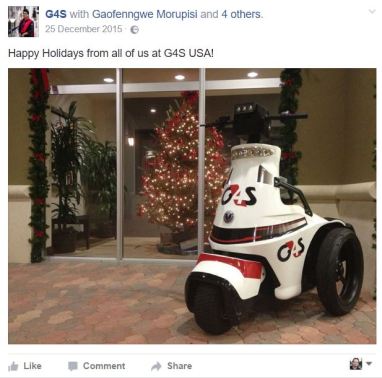 They have sent out Ramadan greetings in Saudi Arabia.  This does not contradict what I write. Quite the opposite. There but not in Belgium and in Belgium but not there. Hardly neutral.

The other company is French: Micropole SA. It is not neutral either. 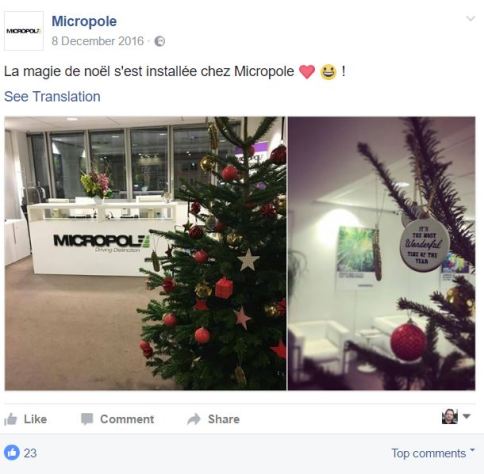 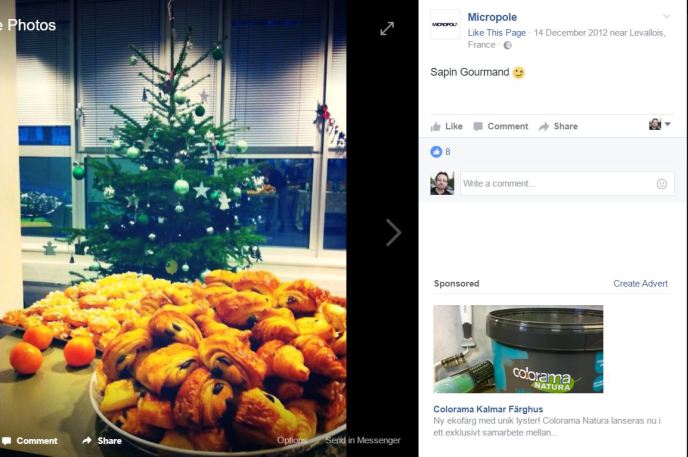 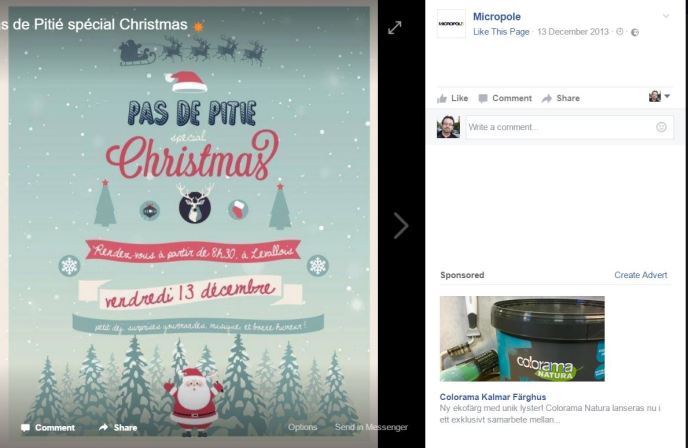 The ruling by the court can be criticized in many ways. But the the matter is a complex one. Two principles collide, the principle of private ownership and the principle about religious freedom. However, in an environment filled with racism and hatred against Muslims it is very important that the courts act consistently when dealing with cases like these.

Besides the question of the alleged neutrality of the companies in question, there is another problem that I wish to focus on. The court does not make a clear definition of religiously neutral clothes. Some Muslims consider wearing the hijab as an important part of their faith. It is a part of what is sometimes called “Islamic dresscode”. Besides the hijab, that means covering the arms and legs. But trousers are not considered religious clothes. The hijab is. What kind of clothing then can, and cannot be defined as religious?

The court decided that the ban against headscarf is legal “provided that that policy is genuinely pursued in a consistent and systematic manner.”

The decision is inconsistent, and will result in arbitrary decisions by employers. It will be up to the EMPLOYER to decide what they define as religious or not. In an environment with much hatred against Muslims, as well as Jews (I should add), this is potentially dangerous.

Article 6 in the European Convention stipulates that every individual has the right to a fair trial in court. “In the determination of his civil rights and obligations or of any criminal charge against him, everyone is entitled to a fair and public hearing within a reasonable time by an independent and impartial tribunal established by law. ” In this case the EU court has clearly violated the European Convention with a trial that was not even close to fair.