By Emperor on March 21, 2017 in Breitbart Watch, Loon Politics 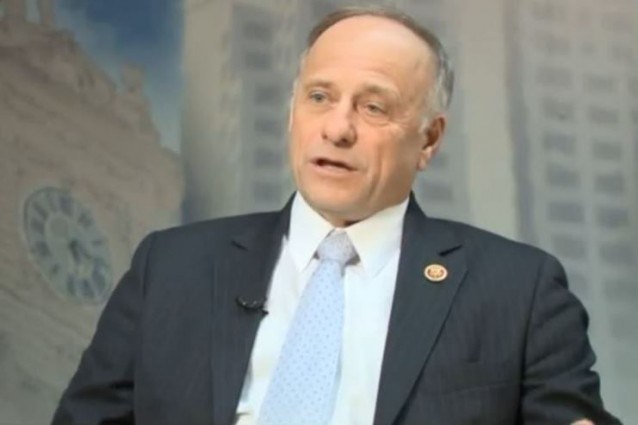 Loonwatchers will be familiar with Christianist fanatic Rep. Steve King’s track record of racism against Blacks and Latinos, as well as his Islamophobia. The Iowa Congressman, who previously cast the sole vote against building a national memorial on slavery claimed: Obama’s “middle name matters” because Muslims and AlQaeda (yes, he conflates the two) will “be dancing in the streets” once he became president, supported the brutal Sisi regime coup against a democratically-elected government, called for undermining freedom of religion by instituting aggressive surveillance of mosques, invited Dutch fascist Geert Wilders, convicted of racist hate speech to address Congress, denied the existence of anti-Muslim discrimination, and last year claimed that “Western Civilization” (read: White people) basically contributed everything to humanity’s progress.

King continued his Islamophobic crusade and fangirl crush on Wilders last week. Quoting a Wilders tweet he commented that “Wilders understands that culture and demographics are our destiny. We can’t restore our civilization with somebody else’s babies.”

Wilders understands that culture and demographics are our destiny. We can’t restore our civilization with somebody else’s babies. https://t.co/4nxLipafWO

A majority of Dutch seem to disagree, as Wilders did far worse than expected in recent elections, losing to Center-Right politician, Mark Rutte. Who is the “our” that King is referring to? Who built “our civilization?”

King, is simply propagating the false and ignorant talking points of White supremacy. What underlines all of these racist outbursts is a deep insecurity and fragility. The US is fast approaching a majority minority nation, power will shift from the dominant group who have profited from White privilege for years to minority communities at a greater rate. Rightwing content mill-generators such as the Daily Caller (where Paul Ryan is described as a “progressive”), and Breitbart are publishing defenses of King. Ilana Mercer, laments how,

“At their inception, the core, founding populations in these countries possessed the innate abilities and philosophical sensibilities to flourish mightily. Now they’re being taught—on pain of punishment—that populations are interchangeable.”

Did she miss the memo that these so-called “core, founding populations” not only taught but actually pursued a violent “interchange” of populations themselves?

Writing in Breitbart, former Congressman/wingnut Tom Tancredo, (who made his name as an anti-Mexico/anti-immigrant xenophobe), makes the wild claim that a cabal of “globalist assassins” (globalist is code for “Jews”) is targeting King and slandering him because he defends true “American values” and “culture.”