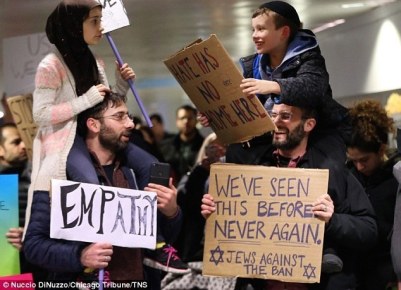 A Jordanian cleric visiting Canada recently misleadingly cited a hadith without context or explanation, which rightly triggered condemnations from the Muslim community as well as numerous headlines around the world. A hadith is an oral report transmitted from the Prophet Muhammad, and can be incredibly complex as one needs to evaluate all the chains of transmission of a particular statement recorded in a hadith in order to arrive at an appropriate conclusion of what the particular hadith is actually talking about. In this case, a single phrase was cited, one describing rocks and trees calling out to Muslims, “There is a Jew behind me, come and kill him.”

This is not the first time that this text has been used to foment anti-Semitic sentiment within the Muslim community. Muslim leaders and scholars must forcefully denounce such rhetoric and clarify Islam’s unequivocal condemnation of all forms of anti-semitism, racism, discrimination, and xenophobia. Of course, Islamophobes pounced on the opportunity to trigger alarm bells and generate a new wave of propaganda accusing Muslims of genocidal ambitions towards Jews, and to claim that Islam is inherently anti-Semitic and a threat to Western civilization.

Explanation of the misquoted hadith

A story about a supernatural apocalyptic battle between good and evil

When we look up different narrations of the Hadith in question, we find out that the phrase being quoted is actually part of a larger narrative in the genre of eschatology (the part of theology dealing with the end times and the Day of Judgment), describing the return of Jesus and the apocalyptic battle between Jesus and the Dajjal (Antichrist). [1] In this battle that will take place between the armies of Jesus and the Dajjal, several miracles are said to occur including that the Dajjal will melt when Jesus sees him, and that inanimate rocks and trees will speak and identify soldiers of the Dajjal (Sunan Ibn Majah 4077).

This is a story about a battle between two groups of soldiers involved in war, one side of which is clearly unjust; it does not refer to innocent civilians. And it’s not actually a battle about ‘Muslims versus Jews’! As a matter of fact, Muslims believe that all righteous Christians, Jews, and Muslims will be following Jesus after he returns (Qur’an 4:159), while misguided Christians, Jews, and Muslims will be following the Dajjal. Indeed, other Hadith demonstrate that many of the Dajjal’s forces will actually be deviant Muslims (Sunan Ibn Majah 179).[2]

Jews are amongst the good guys in the Muslim apocalypse

Moreover, the vast majority of Jews will NOT be followers of the Dajjal, as hadith commentary describe that the Dajjal’s followers will come from only two out of the twelve Israelite tribes, while most Jews will be righteous folk amongst the forces of good uniting with virtuous Christians and Muslims (Fayd al-Bari, Anwar Shah Kashmiri, 4/197). [3] After all, the Dajjal will be a murderous dictator who claims to be God, an anathema to all followers of the Abrahamic tradition as well as to all people of conscience.

Muslims do not believe that rocks and trees will be pointing out random innocent bystanders, but rather soldiers of the Dajjal – combatants who are themselves involved in killing innocent people. It is about these specific combatants in the Antichrist army that rocks and trees will say, “There is one hiding behind me, come and slay him!” The religious identity of the Dajjal’s soldiers includes evildoers from all backgrounds (including misguided Muslims). Other variants of the hadith state that the rocks and trees will simply say, “Here is a rejector of truth hiding behind me!” (Musnad Ahmad 3546), and do not use the word “Jew” to describe them.

Therefore, this hadith describes a future battle between warriors and can only occur after the return of Jesus; in no way can this hadith be interpreted as a prescription to go out and harm civilians or peaceful members of any faith community. The Qur’an explicitly condemns violence against civilians and non-combatants, stating “Whoever kills a soul it is as if he has slain all humanity,” (5:32) and, “So if they withdraw and do not fight you, and offer you peace, then God gives you no way against them,” (4:90). War is only permitted in defense against aggression or to aid the oppressed, as in the case of Jesus fighting against the Dajjal’s forces.

The question of Anti-Semitism and the Armageddon

All three Abrahamic faiths (Islam, Christianity and Judaism) have well-established traditions about a prophesied Messiah who will engage in a battle against the forces of evil in the end times, whether it be the return of Christ who will battle all the nations of the earth, or the coming of the Masiach ben Yossef who will destroy the Edomites and enemies of Israel. [4] All three groups have had to explicate these esoteric eschatological passages in order to steer clear of antagonism towards other communities. In 2012, A DNC County Chairman resigned after he said, “The Christians just want us to be there so we can be slaughtered and converted and bring on the second coming of Jesus Christ.” [5]The Bible describes the Armageddon in painful terms regarding the enemies of Christ/Israel (See: Zechariah 14:12). [6] It’s necessary for people of all faiths to not allow their texts about the end times to be hijacked in a way that validates hateful speech or actions in the present. All Abrahamic faiths have eschatological teachings that are esoteric and require careful critical interpretation. The mainstream leaders of all faith communities have consistently emphasized tolerance and respect for others.

Islam denounces all forms of anti-Semitism and racism

The Prophet Muhammad taught his companions to respect people of all faith backgrounds and to care for everyone. He said, “Donate in charity to people of all faiths” (Musannaf Ibn Abi Shaybah 3/177) [7] and he personally used to donate money regularly to sponsor a Jewish family in his community. [8] When the Prophet saw the funeral procession of a Jew passing by, he stood up out of respect. When some companions pointed out that the deceased was not Muslim, he rebuked them stating, “Is it not a human soul?” (Sahih Bukhari 1250). The lesson here is to respect all humanity. Some Jews converted to Islam and yet others, like the Rabbi Mukhayriq, continued to practice Judaism and still remained on good terms with the Prophet (Seerah Ibn Hisham 1/518). Even when the Prophet passed away, he had his armor mortgaged to a Jewish person (Sahih Bukhari 2759), a narration that shows he maintained good relations with Jews until his death. As the Qur’an says, “(God) instructs you to deal kindly and justly with anyone who has not fought you for your faith or driven you out of your homes: God loves the just,” (60:8). According to Al-Tabari, one of the earliest commentators, this verse encourages good relations with “all the sects, creeds, and religions,” (Tafsir al-Tabari 60:8). These Qur’anic teachings have inspired Muslims throughout the ages. During World War II, the Grand Mosque in Paris rescued Jews fleeing the Nazis and provided them with a safe haven and means of escape. This is the legacy that Muslims must recall and revive.

In addition to respecting other faiths, Islam prohibits harming others and places great emphasis on Muslims maintaining positive relationships with those outside the faith. The Prophet Muhammad issued a stark warning about persecuting others, “Whoever harms a non-Muslim at peace with us will never smell the fragrance of paradise, although its fragrance can be found a distance of forty years of travel,” (Sahih Bukhari 6516). On the Day of Judgment, the Prophet himself will argue on behalf of persecuted non-Muslims and against the Muslims who persecuted them, “If anyone wrongs a non-Muslim at peace with us, violates his rights, burdens him with more work than he is able to do, or takes something from him without his consent, then I will be his advocate on the Day of Resurrection.” (Sunan Abi Dawud 3052). This stunning indictment should make any Muslim think twice before hurting anyone.

Yaqeen Institute will be releasing a full research paper studying the relationship between Muslims and Jews during the lifetime of Prophet Muhammad and during Islamic history by the end of April 2017.

[2] T​his narration states that he will emerge from the deviant group known as the Khawarij (Sunan Ibn Majah 179), and according to commentaries on Ibn Majah, he will emerge at the head of a great army (“jaysh al-adheem”) of Khawarij (Shuruh Sunan Ibn Majah, edited by Raed Sabri Ibn Abi Ulfah). Another narration ​(​Sahih Bukhari 1881) states that he will be joined by the inhabitants of Makkah and Madinah who are Munafiqeen – those who outwardly claim to be Muslim but whose insincerity in faith will be evident once they join forces with the Dajjal.

[3] Fayd al-Bari explains, “This is only about the Jews whom Jesus is fighting against, namely those in the armies of Dajjal.” In fact, if Dajjal is followed by a cult of seventy thousand wearing green shawls this amounts to less than 0.5% of the global population, a tiny fraction.

[4] “Appendix II – Mashiach in Jewish Law by Rabbi Dr. J. Immanuel Schochet, from his book “Mashiach – the Messianic Era in Jewish Law” on Chabad.org. Dr. Schochet writes, “Interestingly enough, according to Pirkei deR. Eliezer ch. 28 (in non-censored versions), the Ishmaelites (Arabs) will be the final kingdom to be defeated by Mashiach.” http://www.chabad.org/library/moshiach/article_cdo/aid/101747/jewish/Appendix-II.htm#footnote6a101747

Dr. Nazir Khan is a Research Director at Yaqeen Institute for Islamic Research. He is also an Imam and member of the Manitoba Fiqh Committee. He holds an ijaazah in theology, Quran and Hadith and is the founder ofSpiritualPerception.org

Imam Omar Suleiman is the Founder and President of the Yaqeen Institute for Islamic Research, and an Adjunct Professor of Islamic Studies in the Graduate Liberal Studies Program at SMU (Southern Methodist University). He is also the Resident Scholar at Valley Ranch Islamic Center and Co-Chair of Faith Forward Dallas at Thanks-Giving Square.

Justin Parrott is a Research Fellow at Yaqeen Institute for Islamic Research. He holds a BA in Physics, English from Otterbein University. He also holds a MLIS from Kent State University and a MRes in Islamic Studies in progress from University of Wales. He currently serves at NYU in Abu Dhabi.