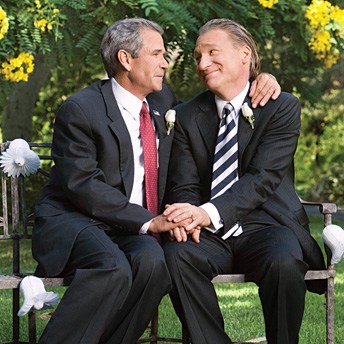 Bill Maher and George Bush: Closer in thought then we ever knew?

A friend forwarded me a September 2014 video telling me “you’re swimming upstream in your defense of Islam.” Not knowing I was defending Islam (I see my political stances as defenses of human rights of people, including Muslims.), I replied, “only out of respect for you did I waste 3 minutes listening to Bill Maher.” He then wrote, “Who better than you, to point out where he’s right and where he’s wrong? Please share your thoughts.” Of course, there are many better qualified than me (see after the blog post.) But, after some delay, here they are.

I’m not going to fact check everything Maher said in the interview clip, which begins at 9:45. But as an example of an incorrect fact, Maher said that over 80% of Muslims in Egypt support execution of former Muslims who renounce the religion of Islam. If you look at the actual poll, it is actually 86% of the Muslims who favored making “Sharia the Law of the Land.” In Egypt, the percentage of Muslims who favored making Islamic law the official law in Egypt was 74%. So the number Maher should have cited was 86% x 74% = 64%.

I’ll ignore the arguments my brother makes on why it is possible for liberal polities to function with people with illiberal views.

My criticism is that Maher’s message is ahistorical and its policy implications are at best unclear and at worst genocidal.

In a few sentences, I want to say what Edward Said said in Orientalism & summarized in Covering Islam. A poll reveals a snippet of a person’s opinion at a given moment. Is the reason the person answered that way, i.e. held that illiberal view, that he or she is a Muslim? Or is the reason that the person’s analysis of his or her country’s history leads him or her to think that only Divine Intervention can improve it? What would a series of polls have revealed about Muslims? Have their ideas changed over time? If so, wouldn’t it mean that their opinions on things at any one time is more a product of their secular, historical circumstances than their religion? And the corollary would then be that a change of their secular, historical circumstances would change their religious opinions.

Are Afghanis who grew up with war and exile since 1979 likely to have liberal opinions? When the “civilized” and “liberal” world established the Zionist entity on Palestinians’ land in 1947 and then ignored Palestinians’ appeals to liberal ideals for 50 years, is it surprising that many Palestinians have come to see those liberal ideals as false? Why did ISIS start in Iraq & Syria? Does the United States’s destruction of Iraq have anything to do with it?

Focusing on the religion of Islam allows United States “liberals” like Maher to completely ignore policies which have contributed to the circumstances which gave rise to illiberal beliefs among Muslims.

Secondly, I ask Maher what does he think good liberals should do with this information. Should they discriminate against Muslims in housing and employment? Should they support policies which kill large numbers of Muslims, like invasions of Muslim-majority countries and unconditional support for dictatorships which promise to suppress Islamists and for Israel, the majority of whose victims are Muslim? Should they regularly accost their Muslim friends, co-workers, neighbors and strangers with criticisms of the religion of Islam? Should liberals oppose zoning of new masjids and private Muslim religious schools and cemeteries? Should they encourage popular culture portrayals of Muslims as bad people? Should liberals approve of any criticism of Muslims or of historical Muslim figures, regardless of their accuracy? Should liberals support ideological tests for immigration?

I’ll listen to atheists’ thoughtful criticism of Muslims, Islam, the Messenger Muhammad ﷺ and religion in general, but I won’t listen to them if they also support violations of Muslims’ human rights, like Sam Harris and Ayaan Hirsi Ali.

In the course of writing this blog entry, I looked up other articles criticizing Bill Maher’s statements about Muslims. I did not use them, but I thought I’d include them below for reference.

Sonia Soraiya’s article ends with a passage worth contemplating:

I think Maher confuses compassion with idiocy. Compassion is a quality that has nothing to do with how smart or how right you are. It’s a quality that is at the root of not wanting to make generalizations, and at the root of wanting to say things that do not horrifically offend other systematically oppressed people. I fully believe that Maher doesn’t understand those well-meaning liberals, those politically correct assholes. I would just rather be one of them, I think, than to merely be right; I would like to be able to understand another point of view, from time to time. And especially on a day like yesterday, I would like to be able to feel compassion.

Bill Maher did in fact criticize the idea of a national registry for Muslims, although he did not explain why. I wonder if he would have done so had President Obama or candidate Hillary Clinton had proposed it instead of candidate Donald Trump.