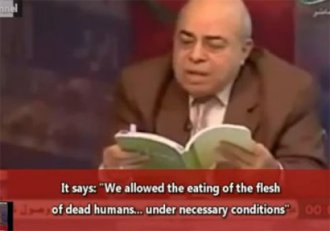 For centuries Jews have been persecuted and murdered because that Jews ritually murder children and eat them directly or use their blood in the baking of Passover matzah (unleavened bread). Today such myths spread about Muslims too: the myth that Islam allows cannibalism.

When doing comparative studies of anti-Semitism and Islamophobia one can easily see the similarities between the two. The myths, slanders, rumours, and racist methods are almost identical but is directed against two different groups, Muslims or Jews.

One such myth that is almost identical is the “blood libel myth”. This anti-Semitic version of the myth looks like this:

“The “blood libel” refers to a centuries-old false allegation that Jews murder Christians – especially Christian children – to use their blood for ritual purposes, such as an ingredient in the baking of Passover matzah (unleavened bread). It is also sometimes called the “ritual murder charge”… The blood libel spread throughout the Christian world in the Middle Ages. When a Christian child went missing, it was not uncommon for local Jews to be blamed. Even when there was no evidence that any Jew had anything to do with the missing child, Jews were tortured until they confessed to heinous crimes.”

Today these myths are still heard all over the world about Jews. But there is an Islamophobic version of the myth too.

“Muslims eat Christians”. That kind of myth was spread during the crusades  in the Middle Ages.  Today it is sometimes still claimed that “Islam allows cannibalism”.

I will spare the readers the details of the Myth. If you want to  study what racists claim about Islam and cannibalism you can easily find articles from Jihadwatch and Pamela Geller on the subject by using Google.

The most common version of this myth claims that the Al-Azhar University in Egypt has published lots of books on this subject. This information popped up on the internet in 2009-2010, after President Obama had visited the university. In 2012-2013 an Arab TV-show claimed that Al-Azhar teaches that cannibalism is “ok”. Walid Shoebat, a Christian Islamophobe, picked up this alleged TV-show and wrote a series of articles about it. Like this one:

“In the future, the Egyptian Islamists will not only be conducting systematic violence, but cannibalism against Christians and moderates.

In a recent video interview, one Egyptian scholar exposed the high school curriculum coming from Al-Azhar university, the most reputable of all Islamic schools, showing that it condoned cannibalizing non-Muslims:

‘We allowed the eating of the flesh of dead humans… under necessary conditions. It [dead human flesh] must not be cooked or grilled to avoid Haram (wrongdoing) …and he can kill a murtadd (apostate) and eat him.’

‘The book that is being taught to general high-school students mentions that those who don’t pray can be grilled & then eaten’.”

From this TV-interview, that Shoebat popularized, stems most versions of the modern Muslim blood-libel myth. But currently the myth is mixed with similar allegations about ISIS. That “Muslims allow cannibalism” and the proof for that is that ISIS allow cannibalism (and sometimes it is claimed that the Al Azhar university authorized ISIS to eat its enemies).

Perhaps such a book exist, I dont know. The myth is nevertheless a typical racist myth. One or two alleged books allegedly published by one Egyptian university somehow is the “proof” that all Muslims, and all of Islam, allows cannibalism.

As for Shoebat himself he does not seem to be a cannibal, he prefers to nuke people. 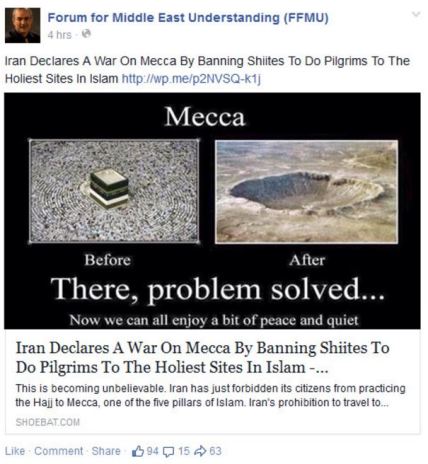