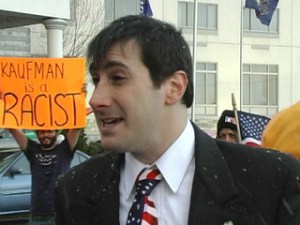 In a now infamous article titled, A Kahane Legacy Lost Kaufman wrote a eulogy admiring the late Rabbi Meir Kahane and expressing angst and deep sadness at his loss while affirming that the ideology that Meir Kahane developed was correct.

It is an embarrassing article for Kaufman, especially since he attempts to now posit himself as a mainstream American patriot when in fact he has supported radical violent/racist ideologies and participated with banned organizations such as the JDL, founded by Kahane and designated a terrorist organization by the US State Department.

Kaufman wrote in the article that he posted on the now defunct JDL forums in 2001,

I never did get that chance to see him [Kahane], though. He was murdered seventeen days before the event…I recall seeing one of my fellow JSU members crying, after hearing about this. I couldn’t believe that a person that I knew so little about…could elicit such feelings in someone… at least someone that wasn’t related or even a friend of the family! But I soon learned otherwise, as I watched the film that was shown in Kahane’s place. It was a film of a speech that he had given previously, and I cannot describe to you properly just how moving it was!

Who exactly is Kaufman so “moved” by? Well, Meir Kahane was an advocate for the expulsion of all non-Jews from the Biblical Israel which includes the West Bank and Gaza, he was a proponent of a theocratic Jewish Kingdom governed by Torah Law, he founded the terrorist JDL which was banned in the USA and the Kach party which was eventually banned in Israel for being racist and violent. Adherents to the Kahanist ideology have engaged in terrorism against Muslims and Arabs, as was the case with Dr. Baruch Goldstein who massacred over 30 worshipers in the Ibrahimi Mosque in Palestine.

So how long will ole’ corky Kaufman put up the facade that he is a die-hard American patriot when it seems he is motivated not by democratic ideals but the spirit of his late mentor Rabbi Meir Kahane?