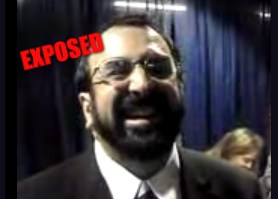 This is still my favorite picture of Robert Spencer.

A while back Danios wrote one of his most popular pieces debunking Robert Spencer’s work. It dealt with a chapter from Spencer’s, Politically Incorrect Guide to Islam and was titled The Church’s Doctrine of Perpetual Servitude. Spencer wrote a reply that basically skirted around the subject and in effect dug himself into a bigger hole then he was in previously. Danios replied to Spencer who has remained mum on the debate since then, essentially conceding to Danios and Loonwatch.

One of our readers, Paterfamilias, wrote to inform us that Spencer’s reply contained more factual errors. Spencer claimed that Pope Pius XII, though “controversial” was “memorialized at Yad Vashem.”

The record of Pope Pius XII is controversial, but there has been a good deal of misinformation publicized about it. In reality, he helped save many hundreds of thousands of Jews and was memorialized at Yad Veshem.

Oh really, a lot of misinformation? So much for Robert Spencer’s research abilities. He could have easily done a Google search to check the veracity of such a claim, but for a paid polemicist with an ax to grind it’s probably considered a waste of time.

Yad Vashem, the state of Israel‘s official Holocaust memorial, has generally been critical of Pope Pius XII, the pope during The Holocaust. For decades, Pius XII has been nominated unsuccessfully for recognition as Righteous Among the Nations, an honor Yad Vashem confers on non-Jews who saved Jewish lives during the Holocaust altruistically and at risk to their own lives.

Yad Vashem affixes the following captions to two pictures of Pius XII in both English and Hebrew,

In 1933, when he was Secretary of the Vatican State, he was active in obtaining a Concordat with the German regime to preserve the Church’s rights in Germany, even if this meant recognizing the Nazi racist regime. When he was elected Pope in 1939, he shelved a letter against racism and anti-Semitism that his predecessor had prepared. Even when reports about the murder of Jews reached the Vatican, the Pope did not protest either verbally or in writing. In December 1942, he abstained from signing the Allied declaration condemning the extermination of the Jews. When Jews were deported from Rome to Auschwitz, the Pope did not intervene. The Pope maintained his neutral position throughout the war, with the exception of appeals to the rulers of Hungary and Slovakia towards its end. His silence and the absence of guidelines obliged Churchmen throughout Europe to decide on their own how to react.

Yad Vashem’s official website has this to say about Pope Pius XII,

The controversy about Pius XII and the Holocaust is still open. At the end of his visit to Israel in 1964, Pope Paul VI came to Pius’s defense in Jerusalem. On March 12, 1979, Pope John Paul II met with Jewish leaders in Rome and said: “I am happy to evoke in your presence today the dedicated and effective work of my predecessor Pius XII on behalf of the Jewish people.” In a meeting with American Jewish leaders in September 1987 in Miami, John Paul II again recalled the positive attitude of Pius XII. However, his passivity in the face of the Holocaust remains a controversial subject.

How could Robert Spencer get a fact so brutally wrong? Maybe one day Yad Vashem will find Pope Pius XII legitimate for memorializing, but as of now the controversy surrounding his actions and inaction during the Holocaust continue to make the attempts of various Pope’s and advocates unsuccessful.

Robert Spencer should think twice before undertaking a task of disinformation, it just doesn’t fly anymore.