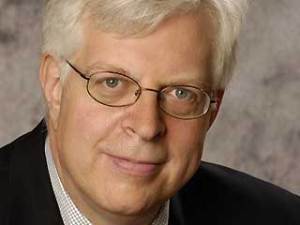 Dennis Prager is at war with leftists, secularists, labor unions, civil rights organizations, Big Government, academics, atheists, Europeans, internationalists, “moral relativists” — and Muslims. Nothing personal, it’s just his worldview — that and the fact that not one Muslim in the entire world is a moderate:

There are a billion Muslims in the world. How is it possible that essentially none have demonstrated against evils perpetrated by Muslims in the name of Islam? This is true even of the millions of Muslims living in free Western societies. What are non-Muslims of goodwill supposed to conclude?

Long before it was fashionable to burn Qu’rans, Prager, a Republican convert, began trash-talking them:

In 2006 he wrote that “America, not Keith Ellison, decides what book a congressman takes his oath on,” in taking great offense that the first Muslim elected to Congress had decided to take his oath of office on a Qu’ran and not on a Christian bible. The ADL noted the bigotry of Prager’s remarks and conservative talk show host Tucker Carlson pointed out the irony that “here we have a Jew pushing a Muslim to use the Christian Bible.”

In Moment Magazine, which features articles of contemporary Jewish interest, Prager awkwardly (and self-contradictorily) defended his views, even after it was pointed out that many politicians had sworn their oath of office on books other than the bible or on none at all:

America has no state religion, nor should it ever be allowed to have one. But it has always been a Judeo-Christian country. Jews—and America itself—will suffer if we cease to be one. Just ask the Jews of secular Europe how their secular societies treat them and Israel. For that matter, just think about how our secular universities have become anti-Israel hate centers.

On the one hand Prager says America should be secular. But on the other hand he says it should privilege Jews and Christians. This is vintage Prager — a new believer in Kulturkampf between Islam and the West.

Despite his own advanced case, Prager denies that Islamophobia actually exists. As the co-author of a book on anti-Semitism himself, Prager should know better, but he wrote:

The fact remains that the term “Islamophobia” has one purpose — to suppress any criticism, legitimate or not, of Islam. And given the cowardice of the Western media, and the collusion of the left in banning any such criticism (while piling it on Christianity and Christians), it is working.

When it comes to anti-Semitism, however, Prager rejects identical arguments and in fact argues that Zionism is part of Judaism — so any criticism of Israel or Jewry amounts to the same thing:

Among the many lies that permeate the modern world, none is greater — or easier to refute — than the claim that Zionism is not an integral part of Judaism or the claim that anti-Zionism is unrelated to anti-Semitism.

Thus, anyone who challenges Zionism — for example, Palestinians who are in conflict with Israel or the legions of academics, NGOs, international organizations, or human rights groups, even many Jews — is by definition an anti-Semite.

Those who deny this and ascribe the conflict to other reasons, such as “Israeli occupation,” “Jewish settlements,” a “cycle of violence,” “the Zionist lobby” and the like, do so despite the fact that Israel’s enemies regularly announce the reason for the conflict. The Iranian regime, Hizbollah, Hamas and the Palestinians — in their public opinion polls, in their anti-Semitic school curricula and media, in their election of Hamas, in their support for terror against Israeli civilians in pre-1967 borders — as well as their Muslim supporters around the world, all want the Jewish state annihilated.

Thus Prager completely dismisses any geopolitical causes or “trivial issues” like land theft or ethnic cleansing. No, there is just one reason for all this hostility and it can only be Islam. And it’s clear that Prager is not just talking about a few fanatical winguts when he lumps all of the world’s Muslims into this denunciation, in an article entitled “The Islamic threat is greater than German and Soviet threats were:”

A far larger number of people believe in Islamic authoritarianism than ever believed in Marxism. Virtually no one living in Marxist countries believed in Marxism or communism. Likewise, far fewer people believed in Nazism, an ideology confined largely to one country for less than one generation. This is one enormous difference between the radical Islamic threat to our civilization and the two previous ones. But there is yet a second difference that is at least as significant and at least as frightening: Nazis and Communists wanted to live and feared death; Islamic authoritarians love death and loathe life.

But in fact, for Prager, who participated in one of David Horowitz’s “Islamo-Fascism Awareness Week” events, “Islam is identical to “Islamofascism:

So once one acknowledges the obvious, that there is fascistic behavior among a core of Muslims — specifically, a cult of violence and the wanton use of physical force to impose an ideology on others — the term “Islamo-Fascism” is entirely appropriate.

Dennis Prager’s attitudes toward Muslims are echoed in his views on immigrants in America. A Tea Party supporter, Prager supports Arizona Law SB1070 and believes in American Exceptionalism or Judeo-Christian Dominionism. In this clip at a Tea Party event in Colorado, sitting next to Sarah Palin, Prager describes his revulsion for internationalism and European morality, praising something rather like an American version of Zionism. His is a world view common to the Tea Party, Likudniks, and neoconservatives.

As for Islamophobia — it’s just one of Prager’s many hobbies — but integral to this worldview.

View all posts by Gefilte →