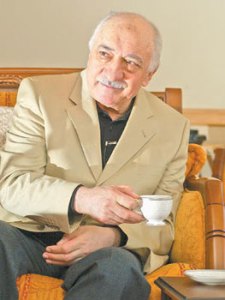 A memoir by a top former Turkish intelligence official claims that a worldwide moderate Islamic movement based in Pennsylvania has been providing cover for the CIA since the mid-1990s.

The memoir, roughly rendered in English as “Witness to Revolution and Near Anarchy,” by retired Turkish intelligence official Osman Nuri Gundes, says the religious-tolerance movement, led by an influential former Turkish imam by the name of Fethullah Gulen, has 600 schools and 4 million followers around the world.

In the 1990s, Gundes alleges, the movement “sheltered 130 CIA agents” at its schools in Kyrgyzstan and Uzbekistan alone, according to a report on his memoir Wednesday by the Paris-based Intelligence Online newsletter.

The book has caused a sensation in Turkey since it was published last month.

Former CIA operative Robert Baer, chief of the agency’s Central Asia and Caucasus operations from 1995 through 1997, called the allegations bogus. “The CIA didn’t have any ‘agents’ in Central Asia during my tenure,” he said.

It’s possible, Baer granted, that the CIA “turned around this ship after I left,” but only the spy agency could say for sure, and the CIA does not comment on operational sources and methods.

Likewise, Graham Fuller, a former CIA station chief in Kabul and author of “The Future of Political Islam,” threw cold water on Gundes’s allegations about Kyrgyzstan and Uzbekistan.

“I think the story of 130 CIA agents in Gulen schools in Central Asia is pretty wild,” Fuller said by e-mail.

“I should hasten to add that I left CIA in 1987 — nearly 25 years ago — and I have absolutely no concrete personal knowledge whatsoever about this. But my instincts tell me the claim is highly improbable.”

Fuller added, “I cannot even imagine trying to credibly sell such a scheme with a straight face within the agency. As for Nuri Gundes, I am not aware of who he is or what he has written. But there is a lot of wild stuff floating around in Turkey on these issues and Gulen is a real hot button issue.”

Imam Gulen, “whose views are usually close to U.S. policy,” according to Intelligence Online, favors toleration of all religions, putting his movement in direct competition with al-Qaeda and other radical groups for the affection of Muslims across Central Asia, the Middle East and even Europe and Africa, where it has also expanded its reach.

Gundes, who was Istanbul station chief for Turkey’s MIT intelligence agency, “personally supervised several investigations into Gulen’s movement in the 1990s,” according to the newsletter’s report on his memoir, which has not been translated into English. The purpose of Gundes’s investigation was not immediately clear. His own religious views could not be determined, but the influence of radical Islamist forces in Turkey swelled in the 1990s.

The imam left Turkey in 1998 and settled in Saylorsburg, Pa., where the movement is headquartered. According to Intelligence Online, he obtained a residence permit only in 2008 with the help of Fuller and George Fidas, whom it described as head of the agency’s outreach to universities.

“I did not recommend him for a residence permit or anything else. As for George Fidas, I have never even heard of him and don’t know who he is.”

“What I did do,” Fuller explained, “was write a letter to the FBI in early 2006 …at a time when Gulen’s enemies were pressing for his extradition to Turkey from the U.S. In the post 9/11 environment, they began spreading the word that he was a dangerous radical. In my statement to the FBI I offered my views…that I did not believe he posed a security threat of any kind to the U.S. I still believe that today, as do a large body of scholars on contemporary Islam.

“I do not at all consider Gulen a radical or dangerous.” Fuller continued. “Indeed in my view–and I have studied a lot of Islamist movements worldwide–his movement is perhaps one of the most encouraging in terms of the evolution of contemporary Islamic political and social thinking…”

Fidas could not be reached for comment, nor would the CIA answer questions about him. George Washington University’s Elliot School of International Affairs lists him as a visiting professor and “Director for Outreach in the Office of the Assistant Director of Central Intelligence for Analysis and Production.”

But the title was abolished when the Directorate of National Intelligence was created several years ago, an informed source said.