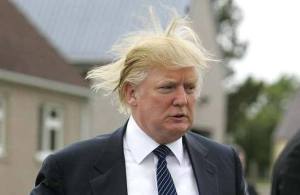 Donald Trump is gearing up to run for president and is attempting to play to the uber-Conservative base of the Republican party. He questions Obama’s birth certificate, says “it might say he’s Muslim,” and also thinks there is a “Muslim problem,” to buttress this point he says he has been opposed to the “Ground Zero” mosque since the beginning. Talk about opportunist, if you look in the dictionary it might have Donald Trump’s sleaze ball face next to the definition.

Trump: World Has a ‘Muslim Problem’

O’Reilly asked Trump whether there is a Muslim problem in the world.

“Absolutely, absolutely — I don’t notice Swedish people knocking down the World Trade Center,” Trump said. “I came out very strongly against the mosque being built virtually across the street.

Trump said although there is a world Muslim problem, it does not reflect on all Muslims.

“And that’s the sad part about life, because you have fabulous Muslims — I know many Muslims, and they are fabulous people, they’re smart, they’re industrious,” he said. “Unfortunately, at this moment in time, there is a Muslim problem in the world.”

Turning to the issue of Obama’s birth, Trump said at first he hadn’t contested the president was born in Hawaii, but circumstances made him think twice. He also said it is wrong to demonize people who question the need for Obama to produce proof.

“People have birth certificates . . . now, he may have one, but there is something on that birth certificate — maybe religion, maybe it says he’s a Muslim — or he may not have one,” Trump said. “But I will tell you this: If he wasn’t born in this country, it’s one of the great scams of all time.”