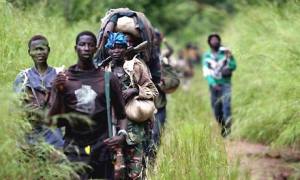 I don’t have a really strong view on whether or not it’s advisable to dispatch a small number of US combat troops to help fight the Lord’s Resistance Army. My instinct is to be skeptical. I want to see less military intervention, not more. But Rush Limbaugh’s instinct is to embrace brutal murderers:

Lord’s Resistance Army objectives. I have them here. “To remove dictatorship and stop the oppression of our people.” Now, again Lord’s Resistance Army is who Obama sent troops to help nations wipe out. The objectives of the Lord’s Resistance Army, what they’re trying to accomplish with their military action in these countries is the following: “To remove dictatorship and stop the oppression of our people; to fight for the immediate restoration of the competitive multiparty democracy in Uganda; to see an end to gross violation of human rights and dignity of Ugandans; to ensure the restoration of peace and security in Uganda, to ensure unity, sovereignty, and economic prosperity beneficial to all Ugandans, and to bring to an end the repressive policy of deliberate marginalization of groups of people who may not agree with the LRA ideology.” Those are the objectives of the group that we are fighting, or who are being fought and we are joining in the effort to remove them from the battlefield.

This post is illustrated with a photo of a man who survived a Lord’s Resistance Army machete attack and has the gashes on his head to prove it. You can read more about it courtesy of Human Rights Watch:

LRA forces attacked at least 10 villages, capturing, killing, and abducting hundreds of civilians, including women and children. The vast majority of those killed were adult men, whom LRA combatants first tied up and then hacked to death with machetes or crushed their skulls with axes and heavy wooden sticks. The dead include at least 13 women and 23 children, the youngest a 3-year-old girl who was burned to death. LRA combatants tied some of the victims to trees before crushing their skulls with axes.

The LRA also killed those they abducted who walked too slowly or tried to escape. Family members and local authorities later found bodies all along the LRA’s 105-kilometer journey through the Makombo area and the small town of Tapili. Witnesses interviewed by Human Rights Watch said that for days and weeks after the attack, this vast area was filled with the “stench of death.”

Fighting, Lord’s Resistance Army, LRA, Muslims in Sudan, Rush Limbaugh, Uganda, What if they were Muslim