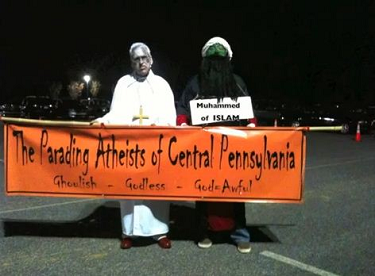 Zombie Pope and Zombie Muhammad Marching in a Halloween Parade

All across the looniverse, there is an uproar over an alleged triumph of Sharia in a Pennsylvania court case presided over by a “Muslim” judge.  It’s not the first time anti-Muslim bigots pounced on a story of so-called “legal jihad” before they got their facts straight.

This time, Pennsylvania State Director of American Atheists, Ernest Perce V, was parading down the street as “Zombie Muhammad,” when an outraged Muslim bystander allegedly grabbed him, choked him from behind, and attempted to remove a “Muhammad of Islam” sign from around his neck. Both men complained to  police, Perce for assault and Elbayomy because he apparently thought insulting Islam was a criminal offense.

Perce filed charges, but a judge dismissed the case after he allegedly said, “I’m a Muslim,” and chastised the atheist in question for his misinterpretation and lack of understanding concerning Islam. Judge Martin is not a Muslim, and later said himself he is Lutheran.

Parts of the court video are garbled, and it seems he either misspoke or part of his statement was inaudible.  In any case, his statements and decision to dismiss the case have sparked a fresh controversy over  the limits of free speech.

The judge said in part:

Before you start mocking someone else’s religion you may want to find out a little bit more about it. That makes you look like a doofus…

I don’t think you’re aware, sir, there’s a big difference between how Americans practice Christianity – uh, I understand you’re an atheist. But, see, Islam is not just a religion, it’s their culture, their culture. It’s their very essence, their very being. They pray five times a day towards Mecca. To be a good Muslim, before you die, you have to make a pilgrimage to Mecca unless you are otherwise told you cannot because you are too ill, too elderly, whatever. But you must make the attempt…

But you have that right, but you’re way outside your bounds on First Amendment rights.

The inflammatory headline was followed by, “Infidel victim, Ernest Perce, has received 471 verifiable threats.” No source was cited to substantiate the claim.

This is enforcement of Sharia in a Pennsylvania court. The attacker supposedly got off because he “is an immigrant and claims he did not know his actions were illegal, or that it was legal in this country to represent Muhammad in any form. To add insult to injury, he also testified that his 9 year old son was present, and the man said he felt he needed to show his young son that he was willing to fight for his Prophet.”

Though part of the statement on Jihad Watch is in quotes, it’s unclear who Spencer is quoting. A full transcript of the judges statement is here, and the defendant’s immigrant status and lack of legal knowledge are not cited as reasons for dismissing the case.

Spencer also doesn’t explain how this is an example of Sharia. What Islamic Law did the judge cite in this case? Spencer doesn’t say, and apparently that’s fine with his no-evidence-required audience.

Although Eugene Volokh of  The Volokh Conspiracy strongly disagreed with the judge’s decision, he said:

…This is not a situation where the judge “applied Sharia law” in any normal sense of the phrase. The judge claimed that he simply didn’t find enough evidence against the defendant. Perhaps the judge was biased against the victim because of the victim’s anti-Muslim speech, but an anti-Sharia law wouldn’t have helped avoid that. More broadly, a law banning judges from “consider[ing] … Sharia Law” (in the words of the Oklahoma anti-Sharia amendment) wouldn’t keep judges from concluding that someone who insults members of other religious groups should be admonished, punished, or even stripped of the right to legal protection — they would just conclude this based on their own notions of refraining from offending other groups….

The case has nothing do with Sharia, and everything to do with the interpretation and application of American Law.

In the US, free speech is protected by the First Amendment to the US Constitution, and in most cases, speech that is distasteful, inflammatory, racist, sexist, or even outright hate speech, is usually permitted. However, there are exceptions, including “fighting words” and “incitement to imminent lawless action.” Though the judge did tell the plaintiff it was his opinion he’d gone way outside the bounds of free speech, this was not the stated reason for dismissing the case.

In response to the controversy, Judge Martin gave a statement clarifying :  ((H/T: Just Stopping By)

This story certainly has legs. As you might imagine, the public is only getting the version of the story put out by the “victim” (the atheist). Many, many gross misrepresentations. Among them: I’m a Muslim, and that’s why I dismissed the harassment charge (Fact: if anyone cares, I’m actually Lutheran, and have been for at least 41 years).

I also supposedly called him and threatened to throw him in jail if he released the tapes he had made in the courtroom without my knowledge/permission (Fact: HE called ME and told me that he was ready to “go public” with the tapes and was wondering what the consequences would be; I advised him again to not disseminate the recording, and that I would consider contempt charges; he then replied that he was “willing to go to jail for (his) 1st amendment rights”- I never even uttered the word “jail” in that conversation).

He said that I kept a copy of the Quran on the bench (fact: I keep a Bible on the bench, but out of respect to people with faiths other than Christianity, I DO have a Quran on the bookcase BESIDE my bench, and am trying to acquire a Torah, Book of Mormon, Book of Confucius and any other artifacts which those with a faith might respect).

He claims that I’m biased towards Islam, apparently because he thinks I’m Muslim. In fact, those of you who know me, know that I’m an Army reservist with 27 years of service towards our country (and still serving). I’ve done one tour in Afghanistan, and two tours in Iraq, and am scheduled to return to Afghanistan for a year this summer. During my first tour in Iraq, I was ambushed once, attacked by a mob once, sniped at once, and rocketed, bombed, and mortared so many times that I honestly don’t know how many time I’ve been attacked. Presumably by Muslim insurgents. My point: if anyone SHOULD be biased towards Muslims, one would think it would be me. I’m not, however, because I personally know or have met many good, decent people who follow Islam, and I shouldn’t characterize the actions of those who tried to kill me as characterizations of all Muslims.

When I asked him why he dressed up as “Muhammad zombie,” he told me that it was because he was reflecting the Muslim belief that Muhammad rose from the dead, walked as a zombie, and then went to heaven. That was one of the reasons I tried to spend 6 whole minutes trying to explain and de-mystify Islam through my own knowledge, and in an attempt to prevent an incident like this recurring in my community. Unfortunately, the message was obviously not received in the vein that I had intended. And, in the interest of full disclosure, I did use the word “doofus,” but didn’t call him that directly; I said something akin to “ if you’re going to mock another religion or culture, you should check your facts, first- otherwise, you’ll look like a doofus.”;

In short, I based my decision on the fact that the Commonwealth failed to prove to me beyond a reasonable doubt that the charge was just; I didn’t doubt that an incident occurred, but I was basically presented only with the victim’s version, the defendant’s version, and a very intact Styrofoam sign that the victim was wearing and claimed that the defendant had used to choke him. There so many inconsistencies, that there was no way that I was going to find the defendant guilty.

A lesson learned here: there’s a very good reason for Rule 112 of Rules of Criminal Procedure- if someone makes an unauthorized recording in a Court not of Record, there’s no way to control how it might be manipulated later, and then passed off as the truth. We’ve received dozens upon dozens of phone calls, faxes, and e-mails. There are literally hundreds of not-so-nice posts all over the internet on at least 4 sites that have carried this story, mainly because I’ve been painted as a Muslim judge who didn’t recuse himself, and who’s trying to introduce Sharia law into Mechanicsburg.

Attempts to link the case to Islamic Law are illogical and absurd, but will no doubt provide convincing “evidence” for those already inclined to believe “creeping sharia” is a genuine threat to America.

However, the case may very well spark a wider debate. The idea that a judge may have sacrificed free speech on the alter of religious and cultural sensitivity is bound to attract attention, especially as Western democracies increasingly grapple with issues of multiculturalism, provocation, and the boundaries of free speech.