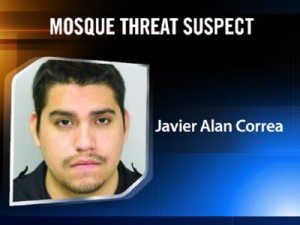 MURFREESBORO, Tenn. – A Texas man accused of making terrorist threats against a local mosque has pleaded not guilty.

Javier Alan Correa turned himself in to U.S. Marshals in Nashville for processing on Monday.

David Boling, the spokesman for the U.S. Attorney’s Office in Nashville, said Correa was released on his own recognizance. No future hearings have yet been scheduled.

The 23-year-old from Corpus Christi was indicted by a federal grand jury in June. He is accused of threatening to blow up the Islamic Center of Murfreesboro on the 10th anniversary of 9/11.

The curse filled message left on a machine at the center said “there’s going to be a bomb in the building.”

Authorities traced the call back to Correa, who lives in Corpus Christi, Texas.

Correa also is charged with violating the civil rights of mosque members by using a threat of force to interfere with the free exercise of their religious beliefs.

He could face up to 20 years in prison if convicted.

The mosque has been at the center of a fierce debate since 2010. Opponents recently prevailed in a court case that challenged its construction.