By Emperor on September 2, 2012 in Feature, Loon People 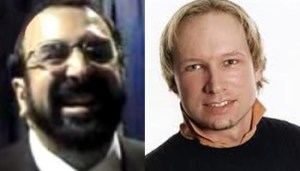 This story comes to us via. Critical Dragon. It is an older story, originally published by the SPLC in November of last year. It is quite astonishing as it clearly proves Robert Spencer‘s links to and parroting of the White Nationalist line. This further adds to the nexus between Western cultural and racist supremacists and Islamophobia.

This piece of Spencer’s worldview seems to be largely overlooked by many when discussing his hate activism.

Proving yet again that nothing is beneath him, anti-Muslim propagandist Robert Spencer has put himself firmly in the camp of open white nationalists with an article published yesterday in Crisis magazine, a conservative Catholic publication. Replete with fawning references to the superior accomplishments of Western culture and the Catholic Church, the piece, titled “Is Multiculturalism Evil?,” proposes that Western civilization is superior to all others and that multiculturalists (aligned with “Islamic supremacists”) are colluding to bring it to its knees.

This is nearly the identical view forwarded by Anders Behring Breivik to justify his terrorist attacks in Norway. According to the Breivik and Spencer’s of the world there is a leftist-Muslim conspiracy that is attempting to destroy the West through the “cult of Multiculturalism.”

Spencer’s links to, associations with and citing of White nationalists, individuals associated with Holocaust denying publications, websites that positively review movies that are wildly popular with neo-Confederates and more gets a thorough treatment by Leah Nelson of the SPLC:

Spencer’s piece is punctuated with a recommended reading list that might have been taken from the bookshelf of John Tanton, the racist architect of the modern nativist movement. Of the five tracts he suggests, four were written and/or published by anti-immigration extremists. They include On the Immorality of Illegal Immigration by retired priest and longtime Tanton ally Patrick Bascio; The Immigration Mystique by Chilton Williamson, who is a frequent contributor to the white nationalist website VDARE; Anthony M. Esolen’s The Politically Incorrect Guide to Western Civilization, which was published by the white nationalist Regnery Press; and Jean Raspail’s 1973 Camp of the Saints, a racist fantasy about an invasion of France and the white Western world by a fleet of starving, dark-skinned refugees that was most recently republished by Tanton’s Social Contract Press.

(Interestingly, Crisis claims that Bascio’s book was put out by “Authorhouse,” of Bloomington, Ind. In fact, its first publisher was American Free Press, a hate group founded by Holocaust denier Willis Carto that also publishes an anti-Semitic and conspiracy-minded weekly.)

Given its recommended reading list, is should be no surprise that Spencer’s answer to the question “Is Multiculturalism Evil” is a resounding yes. Tipping his cap to his Catholic publisher, he denounces multiculturalism as a “heresy” intent on “[d]enigrating and ultimately destroying the Judeo-Christian West, not stamping out some putative racist devaluation of other cultures.”

“Today, no one questions the idea that one culture is as good as another,” he writes in shocked tones. “No one even whispers the possibility that the achievements of one group in a given area (for instance, medieval Christians) might actually surpass those of another group. No one even dares to think that there might be better indicators of the quality of an endeavor than the number of different ethnicities of the people involved.”

“Multiculturalism in reality is an anti-Christian, anti-Catholic, anti-Western exercise in moral and cultural Relativism. … A true multiculturalist hates all forms of Christianity and Judeo-Christian civilization, but retains particular contempt and bile for manifestations of Catholic piety and culture.”

In one particularly hypocritical section, Spencer complains that “European multiculturalists, working willingly in tandem with Islamic supremacists” are trying to enforce the Islamic prohibition against insulting Mohammad by extending anti-hate speech laws to Muslims, while ignoring insults to “the dominant Judeo-Christian culture.”

It is true, as Spencer says, that free speech is valued in the West – but unlike America, many European countries have laws against hate speech, and Spencer’s suggestion that they privilege Muslims is patently absurd. In 2005, for example, the Danish cartoonist Kurt Westergaard drew a set of offensive caricatures of Mohammed whose publication in European periodicals led to a violent reaction among some hard-line Muslims, including two attempts on Westergaard’s life. The cartoonist wasn’t prosecuted for hate speech against Muslims. Rather, he was placed under permanent police protection. On the other hand, in the same year, authorities in Austria arrested British national David Irving for denying the Holocaust. He was convicted and jailed in early 2006.

Spencer further complains about supposed “double standards” in academia, which he claims is controlled by multiculturalists who hate the West. Inconveniently, Anthony Esolen – whose Politically Incorrect Guide to Western Civilization is on Spencer’s recommended reading list – is currently employed as a professor at Providence College.

Despite his bile, it’s no surprise that Crisis should find Spencer appealing. While claiming that it “explores and articulates the subjects of politics, business, culture, faith, and family life from a Catholic perspective,” the magazine – like Patrick Buchanan, a famous Catholic who has recently written several articles for Crisis – obviously has no interest in the church’s pro-immigration stance. Its interim editor, John Zmirak, has contributed numerous articles to VDARE (which, oddly, has also published anti-Catholic screeds – including a recent attack on the church’s embrace of immigrants). Zmirak has also written for David Horowitz’s conservative and anti-Muslim FrontPageMagazine, to which his contributions include a highly positive review of “Gods and Generals,” a 2003 Civil War drama that minimized the role of slavery and was wildly popular in neo-Confederate circles.