By Emperor on October 6, 2012 in Loon People, Loon Politics 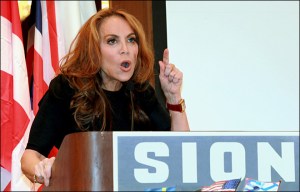 Pamela Geller and Robert Spencer cozy up to Islamophobes who echo their own sentiments about wanting to see “Islam wiped off.” Spencer laughs at Hindu nationalist speaker at SION 9/11 event who compared Islam to bacteria, Muslims to rats and said “Islam will be wiped out.”

A few choice words by Dr. Babu Suseelan, a Hindu activist in Pennsylvania, provided one of these occasions.

“If we do not kill the bacteria,” the jowly Suseelan scolded the audience, “the bacteria will kill us.” Otherwise, he warned, “Muslims will breed like rats and they will be a majority.” Still, he concluded hopefully, “Islam can be stopped! And it can be wiped out.”

Spencer laughed, but Geller covered her face, as if witnessing the antics of a naughty child.

On September 11, most Americans carried on with their day, perhaps pausing for a moment to reflect on the terrorist attacks in 2001. But not the crew of Islamophobes who have exploited the attacks as an opportunity to foment hatred of Muslims and profit off that hatred.

Leading anti-Muslim bloggers Pamela Geller and Robert Spencer held a September 11 gathering in New York City titled “D-Day in the Information Battle Space.” An initiative of what they call the International Freedom Defense Congress, the conference focused on “Islamic supremacist attempts to restrict the freedom of speech in the free world, and the smear campaigns against freedom fighters in newspapers and media institutions in the West,” in the words of Geller.

The gathering brought together speakers from anti-Muslim movements around the globe, including Tommy Robinson of the English Defense League, a violent far-right group. David Yerushalmi, the racist Orthodox Jewish lawyer who has lived in an illegal Israeli settlement, was a speaker as well. And David Storobin, the Brooklyn state senator who created some buzz after being photographed in an Israeli army uniform, spoke to Geller’s conference too.

It was the latest attempt by Geller and her cohort to forge cross-continental links to other anti-Muslim activists. The precursor to this event was a gathering in Stockholm, Sweden that likewise brought together a host of anti-Muslim activists from around the world. Before that, there was the founding of the Stop Islamization of Nations group, “designed to promote an umbrella network of counter-jihad groups across Europe and the US,” as The Guardian reported.

Brooklyn-based writer Aaron Labaree attended the New York September 11 gathering for Guernica Magazine. Labaree reports that Geller opened up the conference with a speech to attendees that called on “every single one” of them to “be a soldier” in the battle to “save the republic.”

By far the most disturbing aspect of Labaree’s report is this snippet:

A few choice words by Dr. Babu Suseelan, a Hindu activist in Pennsylvania, provided one of these occasions.

“If we do not kill the bacteria,” the jowly Suseelan scolded the audience, “the bacteria will kill us.” Otherwise, he warned, “Muslims will breed like rats and they will be a majority.” Still, he concluded hopefully, “Islam can be stopped! And it can be wiped out.”

Spencer laughed, but Geller covered her face, as if witnessing the antics of a naughty child.

Geller may have covered her face, perhaps in slight embarrassment that the activists she cavorts around with have no problem calling for the “wipe out” of an entire religion. But these are her allies.

But the fact that this rhetoric was inevitable may have caused the most high-profile speaker scheduled, John Bolton, to decide it was against his better interest to attend the conference. Bolton is a top neoconservative and a former official in the Bush administration, and is now advising Mitt Romney.

Bolton is an ally of Geller, as The Nation’s Wayne Barrett noted. “Bolton, who has campaigned repeatedly with Romney, is so close to Geller and Spencer that he wrote the foreword to their 2010 book, The Post-American Presidency: The Obama Administration’s War on America, and has done several interviews with Geller, cozily discussing Middle East policy in couch videos,” reports Barrett. In the midst of a campaign season, though, Bolton appearing at a conference like this was bound to attract attention that the Romney campaign could do without. So even though Bolton was advertised as being a speaker at the conference, he never planned on showing.

I emailed an assistant to Bolton, Christine Samuelian of the American Enterprise Institute, before the gathering took place. Samuelian told me that the event was “not on his calendar…He has done it in the past and they may have assumed he was going to do it again this year but he did not commit to anything.”

But think again if you take this as a sign that the GOP is trying to ditch its anti-Muslim wing. The optics of a Romney adviser meeting with people who call for Islam to be “wiped out” would not be good, but the larger alliance is still there. As Labaree explains:

National politicians generally don’t get photographed with anyone who talks like Geller or Spencer, but they are happy to be associated with them at just one level of remove. Last weekend, the Family Research Council held its annual conference in Washington, D.C. The FRC’s Executive Vice President, retired General Jerry Boykin, has gained notoriety for his paranoid rants against Islam, which he has called “the religion of Satan.” The FRC conference’s featured speaker this year was Paul Ryan. And the Ground Zero Mosque affair of 2010 drew plenty of politicians of national stature, including Newt Gingrich and Rep. Peter King, of New York, who made opposition to the “mosque” his signature issue.

These politicians take SION’s position because it’s popular. Most Americans don’t get high on outrage the way Geller and Spencer do, but many are receptive to their ideas about Islam. A recent poll by the Public Religion Research Institute and the Brookings Institution found that almost half of Americans surveyed believe the values of Islam are incompatible with American values; the same percentage would be uncomfortable with a mosque being built in their neighborhood. This is theoretical, of course. Most people don’t have a mosque in their neighborhood: as of 2011, Muslims made up less than 1 percent of the U.S. population (Jews account for 1.6 percent, Mormons 1.9 percent, atheists and agnostics 15 percent). So far, the struggle in which SION attendees are supposed to be soldiers is a fantasy. But if Israel and Iran go to war, if there’s a major terrorist attack on U.S. soil—counter-jihadists and their allies will likely see their star rise. Meanwhile, Geller instructed the troops assembled to keep on blogging.