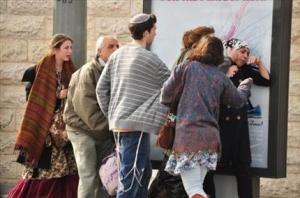 A Palestinian woman waiting at a light rail station in Jerusalem on Monday was attacked and stripped of her headscarf by religious Jewish women, Israeli newspaper Ma’ariv reported Tuesday.

According to bystanders, a young Jewish woman punched the Palestinian suddenly as she was passing by the station. A friend of the assailant began aiding her in beating the Palestinian, pushing her against the wall, and ultimately ripping off her headscarf.

The Palestinian was accompanied by an old man who tried to push the attackers away to no avail.

The event occurred at about three o’clock in the afternoon. It is unclear whether the incident involved only the two assailants mentioned in witness accounts, or a larger group shown in the photo.

“There were about 100 Orthodox and yeshiva students who disembarked the tramway and spotted an Arab woman accompanied by an older man,” a witness, who photographed the event, told Ma’ariv.

“It developed into arguing and yelling, and I don’t know what the content was that everyone jumped on her.”

According to the witness, an activist named Dorit Jordan Dotan, a municipality security officer passively watched the event and seemed to be smiling. Many residents also stood by.

“The entire time, the guard stood and smiled and did not even try to break up the fight,” a witness said.

Dotan confirmed that the incident took place at the station where a group of young people had just arrived from the train, but seemed to downplay the event by suggesting the attackers were intoxicated.

“Young people drink a lot of wine for Purim. Screams were heard everywhere. A woman tried to fight [the Jewish students] but they yelled at her not to dare touch the Jews and continued to beat [the Arab woman],” Dotan said.

Following publication in Ma’ariv, police launched an investigation into the case.

“It’s a shame that the Arab whore didn’t die”

On the day the report was published, Israeli police officer Ariel Shapiro re-posted the article on his Facebook page and issued a chilling endorsement: “Very good,” wrote Shpiro “It’s a shame that the Arab whore didn’t die.” 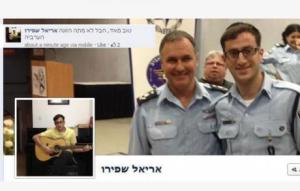 The message was publicized by Palestinian Member of Knesset Ahmad Tibi.

Israeli army and police officers have come under fire in recent weeks for showcasing dehumanizing images of and slogans about Palestinians. The most famous of these is an Instagram photo of Mor Ostrovski, 20, showing the crosshairs of a rifle being aimed at the head of a Palestinian boy.