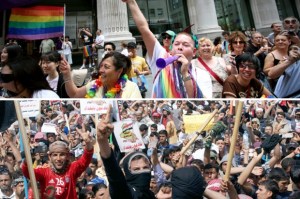 Geller is attempting to pinkwash Islamophobia, but many in the LGBT and Muslim communities will not allow it to happen.

Chris D. Stedman, a humanist, who is also homosexual has been an outspoken fighter against anti-Muslim bigotry and takes on Geller and her cohorts’ claim that they have support from the gay community head on.

Homosexuality is a controversial topic in many Muslim American communities in which there is heated debate about the topic, but there appears to be a consensus that despite disagreements on homosexuality, respect and support for equal rights before the law, especially in the case of the marginalized has to be part and parcel of securing ones own rights.

I have an earnest and sincere question for the LGBT community: Do you support Pamela Geller?

Geller, who is one of the most active proponents of anti-Muslim attitudes in the United States, rose to notoriety as one of the key instigators of the Park51 backlash, misrepresenting a proposed Islamic Community Center (think a YMCA or Jewish Community Center) by calling it the “Ground Zero mosque” and engaging in dishonest rhetoric and blatant fear-mongering. Her organization, Stop the Islamization of America, was identified as a hate group by the Southern Poverty Law Center, a civil rights organization, alongside extremist groups like the Ku Klux Klan and Nazis. And it’s earned that label — Geller and her allies have dedicated countless hours and millions upon millions of dollars to drum up hatred, fear and xenophobia toward Muslims.

Last week I learned that Geller and one of her biggest allies, Robert Spencer, are hosting a fundraiser for their anti-Muslim advertisements on the website Indiegogo. This disturbed me for a number of reasons, but particularly because Indiegogo’s terms explicitly prohibit “anything promoting hate.” (Despite reports from me and many others, Indiegogo has so far declined to remove the fundraiser; if so inclined, you can let them know what you think about that here.)

While I was looking into this, I discovered that Geller recently announced plans to run a series of anti-Muslim advertisements in San Francisco quoting Muslim individuals making anti-LGBT statements. Why? Because members of San Francisco’s LGBT community criticized other anti-Muslim ads she has run there.

I tweeted my appreciation that the LGBT community in San Francisco is standing up against her efforts to drive a wedge between LGBT folks and Muslims. Soon after, Geller retweeted me, claiming that she in fact has “huge support in Gay community.” Immediately, her supporters began to lob insults and even threats at me; Spencer himself suggested that I should be rewarded for supporting Muslims by someone “saw[ing] off [my] head.” (Meanwhile, though Geller, Spencer and their supporters kept tweeting at me that Muslims “hate gays” and want to kill me, many Muslim friends and strangers alike tweeted love and support for LGBT equality at me.)

As things settled down, I realized that Geller had stopped responding to me when I requested more information to back up her assertion that she has “huge support in Gay community,” after the only evidence she provided was a link to a Facebook group with 72 members. I’ve since asked her repeatedly for more information, but have not gotten a response.

I couldn’t think of a single LGBT person in my life that would support her work, but I didn’t want to go off of my own judgment alone. So I started asking around. It wasn’t hard to find prominent members of the LGBT community who do not share Geller’s views.

“The idea that the LGBT community should support Islamophobia is offensive and absurd,” said Joseph Ward III, director of Believe Out Loud, an organization that empowers Christians to work for LGBT equality. “[American Muslims] are our allies as we share a common struggle to overcome stereotypes and misconceptions in America.”

“Trying to drive a wedge between the LGBT community and other communities is old, tired and [it] doesn’t work,” said Ross Murray, director of News and Faith Initiatives for GLAAD. “Pitting two communities [like the Muslim and LGBT communities] against one another is an attempt to keep both oppressed. Wedge strategies are offensive and, in the long run, they do not work. Geller is not an LGBT ally — she’s posing as one because it is convenient to her [anti-Muslim] agenda.”

“As with any attempts at a wedge, these efforts seek to erase the real and powerful reality of LGBT Muslims and seek to create a false dichotomy: All the LGBT people are non-Muslim/Islamophobic and all the Muslims are straight and homophobic,” said Rev. Rebecca Voelkel, program director of the Institute for Welcoming Resources at the National Gay and Lesbian Task Force. “Particularly given the oppression, marginalization, hatred and violence visited upon the LGBTQ community, it is critically important that we use our spiritual, communal and political power to speak out against the victimization and vilification of any other community. As a Christian lesbian, I must stand against any attempts to victimize another because of their personhood.”

“There’s no doubt that there’s a great deal of religion-based bigotry against LGBT people, although it’s hardly limited to Islam. The Hebrew Scriptures also prescribe the death penalty for some homosexual conduct, but you don’t typically see people using this to inflame anti-Semitic or anti-Christian sentiment,” said John Corvino, author of “What’s Wrong With Homosexuality?” and coauthor of “Debating Same-Sex Marriage.” “To single out Muslims in this way is both unhelpful and unfair.”

Despite her claim, the work of Geller and her colleagues has plenty of opposition in the LGBT community. Why?

As Junaid Jahangir writes in a recent piece at the Huffington Post, “[Geller’s] selective references provide a misguided view of the current Muslim position on queer rights issues.” He rightly notes that her advertisements lift up the views of a controversial Muslim cleric, but ignore the “over 2,500 Muslim intellectuals from 23 countries [that] not only called for an international treaty to counter such clerics, but also called for a tribunal set by the United Nations Security Council to put them on trial for inciting violence.” In his piece, which is a must-read, Jahangir goes on to quote many influential, pro-equality Muslim leaders. Pointing to the activism they are doing to support LGBT rights, he demonstrates that Geller is unfairly — and dangerously — presenting a skewed picture of Muslim views on LGBT people.

“There’s no question that homophobia is rampant among the world’s 1.5 billion Muslims — but that doesn’t negate the fact that there are huge groups of Muslims who have easily reconciled their faith and sexual orientation, like LGBT people in other faith communities,” said Reza Aslan, author of “No God but God” and “Beyond Fundamentalism,” in a recent phone interview. “For a woman who leads an organization that has been labeled a hate group to try to reach out to a community like the LGBT community, by trying to make a connection based on bigotry, is harmful and ridiculous. Bigotry is not a bridge.”

Of course, members of the LGBT community are right to be concerned about the dangers of religious extremism and totalitarianism — whether it is Christian, Muslim or any other expression. But demonizing another community won’t help reduce the influence of religious fundamentalism.

You can be honest about your disagreements without being hateful. I’m a queer atheist, and I believe that there are ideas and practices promoted by Muslims in the name of Islam that are not only false — they’re extremely harmful. But to rally against Muslims and Islam as if they and it are some monolithic bloc is counterproductive; it creates enemies where we need allies. There are many Muslims who oppose cruelty and violence done in the name of Islam and favor equality for all people, and they are positioned to create change. We should be working with them, not standing against all of Islam. Based on my own experiences, I know that this is a much more constructive approach. In my book “Faitheist,” I tell several stories about Muslim friends who are not only accepting of my sexual orientation, but are also fierce allies for LGBT equality.

That’s the problem with Geller’s advertisements, and with sweeping, generalizing statements about entire groups of people: They don’t account for the diversity of ideas and traditions that exist within any given community. Geller focuses on a ridiculously tiny minority of Muslim extremists in order to paint her picture of Islam, and in doing so she neglects to account for the rich and varied traditions of generosity, selflessness, social progress and forgiveness present within Islam. Not only that, but her efforts alienate key allies — Muslim and non-Muslim alike — who share her concerns about Muslim extremists, but who also recognize that her narrow approach is unfair and dishonest.

Instead of adopting Geller’s approach, LGBT people should focus on building relationships. After all, support for marriage equality more than doubles among people who know a gay person. The Pew Research Center reports that of the 14 percent of Americans who changed their mind and decided to support gay marriage in the last decade, 37 percent (the largest category) cited having “friends/family/acquaintances who are gay/lesbian” as the primary reason. The second largest group in this astounding shift, at 25 percent, said they became more tolerant, learned more and became more aware.

In 2011, I wrote an essay encouraging more cooperation and solidarity between the LGBT community and the Muslim community:

[In 2009], a Gallup poll demonstrated something the LGBTQ community has known for some time: People are significantly more inclined to oppose gay marriage if they do not know anyone who is gay. Similarly, a Time Magazine cover story featured revealing numbers that speak volumes about the correlation between positive relationships and civic support. Per their survey, 46 percent of Americans think Islam is more violent than other faiths and 61 percent oppose Park51, but only 37 percent even know a Muslim American. Another survey, by Pew, reported that 55 percent of Americans know “not very much” or “nothing at all” about Islam. The disconnect is clear: When only 37 percent of Americans know a Muslim American, and 55 percent claim to know very little or nothing about Islam, the negative stereotypes about the Muslim community go unchallenged.

I continue to believe this, and Geller’s work isn’t helping. Geller, Spencer, and their supporters are wrong to try to pit the queer community against Muslims. Their efforts to force a wedge between us and the Muslim community are little more than fear-mongering — a tactic that has long been used to keep the LGBT community marginalized and oppressed.