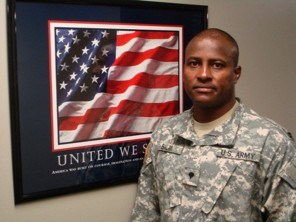 An Army reservist and Iraq veteran who works as a cabdriver says a passenger he picked up early Friday at a Northern Virginia country club accused him of being a terrorist because he is Muslim, then fractured his jaw in an attack being described by Islamic activists as a hate crime.Mohamed A. Salim says the passenger compared him to the men accused of carrying out the Boston Marathon bombing 11 days earlier and threatened to kill him.“Because I’m a Muslim, he treated me like a piece of trash,” Salim said. “I love this country. I didn’t deserve this.”

Ed Dahlberg of Clifton, who has been charged with misdemeanor assault, denied hitting Salim in a statement released by his attorney.

Muslim rights workers said Salim’s account is supported by medical records and an 11-minute, obscenity-filled video of Dahlberg’s remarks leading up to the alleged assault. Salim, a 39-year-old from Great Falls, provided The Washington Post with a copy, which his attorney described as evidence of the prejudice that others sometimes face but rarely document.

The video, which Salim took on his phone, appears to show physical contact between the men but does not capture the alleged punch that Salim said fractured his jaw, the Boston bombing reference or the threat to kill. Salim said that those happened after he stopped recording so he could call the police.

On the video, a middle-aged businessman can be heard asking Salim if he is Islamic and then asserting that most Muslims are terrorists. He says the Koran directs Muslims to kill nonbelievers and then repeatedly and loudly demands that Salim denounce the Sept. 11, 2001, attackers. When Salim asks if the passenger is threatening him, the passenger uses an obscene phrase to respond in the affirmative.

“If you’re a Muslim, you’re a [expletive] jihadist,” the passenger says. “You are just as bad as the rest of them.”

The insult is followed by the sound of a car door slamming. In an interview, Salim said Dahlberg left briefly but returned, struck him and ran into the woods.

Dahlberg’s attorney, Demetry Pikrallidas, said Dahlberg did not assault Salim. Even so, he said, Dahlberg wanted to apologize to anyone offended by his remarks. Dahlberg was profoundly affected by the Sept. 11 attacks, Pikrallidas said, and misunderstood Salim’s response to his questions.

Dahlberg “became rather emotional as the discussion turned to jihad and 9/11, and especially heated on the subject of jihadists who want to harm America,” Pikrallidas said in a statement.

Pikrallidas described Dahlberg as a “hardworking family man and a church-going person” who had been drinking but was not intoxicated. He stressed that Salim’s video shows the ride began with six minutes of friendly conversation.

The Washington-based Council on American-Islamic Relations on Monday asked Fairfax County prosecutors to designate the attack a hate crime. “The prosecutor has a clear opportunity to send a message that anti-Muslim crime will not be tolerated, ” said Gadeir Abbas, an attorney for CAIR.

Fairfax prosecutors said they will review the video to determine whether to prosecute the case as a hate crime, which would elevate the charge to a felony. Prosecutors would have to show that Dahlberg attacked Salim because of his religion, race or national origin.

CAIR said it has documented two suspected hate crimes elsewhere since the Boston bombing. Hours after the April 15 explosions, a Bangladeshi man reportedly suffered a dislocated shoulder when beaten at a New York City restaurant. In Malden, Mass., a woman wearing an Islamic head scarf allegedly was assaulted April 17 by a man shouting anti-Muslim slurs.

On the video, Dahlberg describes himself as the owner of a local brokerage that sells large business jets internationally.

Salim said he has had a headache since the incident, has lost hearing in one ear and has blurred vision. Medical records provided by Salim show that he was treated for a fractured jaw and a head injury.

Salim, a married father of four who emigrated from Somalia 15 years ago, said the incident was particularly painful because he is a naturalized U.S. citizen and an Army Reserve sergeant who served in Baghdad and the U.S. military facility at Guantanamo Bay, Cuba. He has worked in intelligence and as a linguist, he said.

Salim said he was dispatched to the Country Club of Fairfax about 2 a.m. Friday to pick up Dahlberg. When he arrived, he said he told Dahlberg he could not enter the cab with an open beer, so Dahlberg finished it.

Dahlberg then began complaining about the time that had expired on the taxi’s meter, Salim said. As a precaution, Salim said, he started the video recorder on his phone. For most of the ride, it recorded audio but the camera was obscured.

Dahlberg can be heard asking where Salim is from and whether he’s Muslim. Then Dahlberg demands to know Salim’s view of jihad and the 9/11 terrorists, growing progressively louder.

“If you’re a Muslim, you are [expletive] on that same page” as the Sept. 11 terrorists, Dahlberg says at one point. “Denounce those [expletives] that flew jets into the World Trade Center. . . . Tell me that they are pieces of [expletive], or you are with them. . . .

“If you’re a [expletive] Muslim flying jets into the World Trade Center, then [expletive] you, I will slice your [expletive] throat right now.”

Salim tries to calm the situation by saying, “Okay, just peace, and sit, please. Cut off. Cut off.”

Then, about 10 minutes into the ride, Salim aims the phone over his shoulder, informs Dahlberg that he is being recorded and says he is calling the police. The camera shakes, and there are sounds of an apparent scuffle.