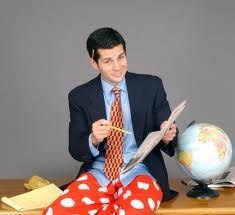 … In an effort to speed up the Muslim take over of America—which on some level would probably help my comedy career because I’ll get even more bookings by Muslim groups—my fellow Arab-American comedians Aron Kader and Maysoon Zayid went out to the streets of NYC with me to see if we could recruit Americans to Islam. (We did this a little while back when we first heard this allegation.) We offered prizes to people to convert to Islam, such as a toaster, a blender and even Sudoku. Here is a clip of our efforts to convert Americans! …

By 2011, this initial skit had become the Muslims Are Coming comedy tour which Dean Obeidallah wrote about in the article America, how can Muslim-Americans reach non-Muslims?.  You can see Dean Obeidallah’s Tedx talk about the comedy tour here 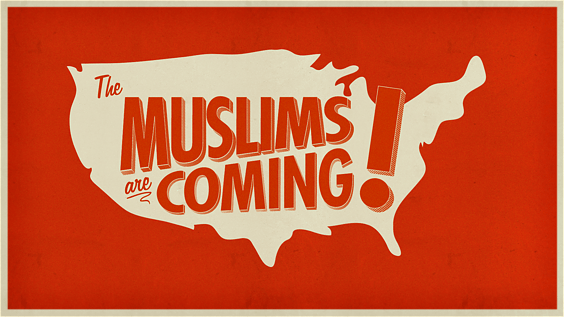 And during the comedy tour, Dean Obeidallah and Negin Farsad began working on making a documentary film based on the comedy tour.  In 2011, Obeidallah requested an interview with Robert Spencer to be included in this The Muslims Are Coming documentary film, and Spencer turned this into a “prove to me you’re not a radical Muslim test”.  I laid out the whole saga in the article The Muslim comedian and the Islamophobe:  A funny thing happened on the way to the interview.  That article includes Spencer’s 1,000 word plus questionnaire requiring an answer before he would consider being interviewed by Obeidallah, and my answers to those stupid questions.  The bottom line is that Spencer didn’t agree to the interview.

Obeidallah and Farsad created a Facebook page, and ran a Kickstarter donation compaign to get the funds to complete the film project.

Now, in 2013, the film is completed, and is set to be released in theaters on September 12th.  This documentary film is co-directed by Negin Farsad and Dean Obeidallah.  You can see the trailer here.

Patrick Gavin published an article about this film titled Film tackles Islamophobia with humor.  He noted that “The film tracks a group of Muslim-American stand-ups as they performed in the Muslims are Coming Comedy Tour across the country and tackle people’s stereotypes.  The film also features cameos by Jon Stewart, David Cross, Janeane Garofalo, Colin Quinn, Lewis Black and Aasif Mandvi.”

Pamela Geller doesn’t find this funny.  She has just written Cultural Jihad: Hollywood Documentary to Mock ‘Islamophobes’.  Here are just a few of her objections to this Muslim comedy:  ”… We aren’t even allowed to discuss Islam and the doctrine of jihad in the mainstream media, but “Islamophobia” is a matter for comedy?  …  So the new cultural jihad is to make it cool and happening and now to make fun of the people who do talk about it at risk of their reputations and livelihoods and personal safety.  …  The Hollywood hordes who have signed on for this film have no intellectual depth, but fighting against “Islamophobia” is perceived to be politically correct and chi chi, and that’s all they need.  …  Meanwhile, anti-jihad activists can’t get movies made. …”

Yes, Geller is right this is a jihad, in the sense that mainstream, traditional Muslims understand jihad — not in the sense that Islamophobes and the Muslim lunatic fringe distort the term.  It is a comedy jihad.  A jihad for truth, justice, and the American way.

I for one am going to buy a ticket and have a good laugh at the idiocy of Islamophobes like Geller and Spencer and the rest of the Islamophobia echo chamber. **************

RESOURCES FOR DEALING WITH ISLAMOPHOBIA SUMMARY

The Islamophobia Industry exists and is engaged in an anti-Muslim Crusade.  They have a manifestofor spreading their propaganda, and which states their goal of “destroying Islam — as a culture, a political ideology, and a religion.” They produce anti-Muslim films.  They are forming new organizations and coalitions of organizations at a dizzying speed, not only nationally, but also internationally.   They have formed an International Leadership Team “which will function as a mobile, proactive, reactive on-the-ground team developing and executing confidential action plans that strike at the heart of the global anti-freedom agenda.”

The Islamophobia of these folks is very real, it is also strikingly similar to a previous generations’ anti-Semitism, and it has predictable consequences.   The reason that this is so obvious to so many is that rational people can tell the difference between legitimate concerns and bigoted stereotypes.

Sadly, the Islamophobic echo chamber has been aided by some in the Jewish and Christian clergy, and even by some of our elected representatives, particularly in the GOP.

The claim that the Islamophobes are “truth-tellers” and “defenders of freedom” who actually “love Muslims” and have never engaged in “broadbrush demonization” or “advocated violence”, or thatnothing that they say could have had anything to do with any act of violence,  are nonsense.  The claim that they are falsely being accused of Islamophobia for no reason other than their legitimate concerns about real issues and that in fact there is not even such a thing as Islamophobia, or their claim that the fact that there are fewer hate crimes against Muslims than against Jews or that some Muslims have fabricated such crimes “proves” that Islamophobia doesn’t exist,  or that the term Islamophobia was made up by Muslims in order to stifle their freedom of speech, or that anti-Muslim bigotry is “not Islamophobia but Islamorealism” are all nonsense.

These individuals and organizations consistently promote the false what everyone “knows” lies about Islam and Muslims (including distorting the meaning of Qur’anic verses, and distorting the meaning of Islamic terms such as taqiyya, jihad, sharia, etc.).  Islamophobes falsely claim to see “JIHAD” PLOTSeverywhere, particularly where they don’t exist.   They, like Muslim extremists, don’t understand the true meaning of the term jihad.  The Islamophobes have uncovered countless examples of “shocking”, non-existent Muslim jihad plots.

An Eid Celebration for Muslim Special Needs Kids was described as a “stealth jihad”.   A children’s page in a newspaper focusing on Eid was described as a toxic propaganda plot.  Joel Hinrichs (a Christian) had a beard and had walked through the parking lot of a campus mosque thus proving that his crime was an example of sudden jihad syndrome.  Leon Alphans Traille, Jr., the Arlington, Virginia Mall Bomber was accused of possible “sudden jihad syndrome” just because he had a beard, obviously, a case of beard jihad.     Tyler Brehm who carried out theHollywood shooting jihad was accused of “sudden jihad syndrome” because he shouted something that one witness from the Philippines said he might have shouted “Allahu Akbar”.  This report was not backed up by any other witnesses.  The awful April 2007 shooting at Virginia Tech by a Korean student was also called Islamic jihad because Cho’s father had once worked in Saudi Arabia (before he was married and before Cho was born).    A Muslim doctor had a heart attack and died at the wheel of his car which then crashed into a shopping mall and this was described as “vehicular jihad”.   A Muslim cab driver objected to what he considered pornographic ads on the roof of his cab, and that became a stealth-jihad plot to impose Sharia on America.  Any Muslim who has sued an employer for violation of their rights under the EEOC is engaged in employment jihad, or litigation jihad.  Muslim environmentalists are said to be actually engaged in “civilizational jihad”.  A cartoon series “The 99” aimed at young Muslims was described as “cultural jihad”.  The victims of the terrorist attack of 9/11 included Muslims, they were accused of dying as martyrs in an act of jihad. Muslims hoped to open a Muslim hospital in the U.S. and that was called hospital jihad.

Nothing is too trivial to escape the eagle eyes of these “defenders of Western civilization” against devious Muslim stealth jihad plots.  Christina Abraham (a Muslim) has a name that is not recognizably Muslim enough and so we have stealth name jihad. And, if a Muslim somewhere is not doing anything at all suspicious, then they are engaged in pre-violent jihad.

Islamophobes generalize specific incidents to reflect on all Muslims or all of Islam.    Islamophobes consistently push demonstrably false memes such as:  – we are in danger from creeping Sharia, – the Muslim population is increasing at an alarming rate, – 80% of American Mosques are radicalized,  –  There have been 270 million victims of “jihad”  –  There have been 17,000+ “Islamic terrorist” attacks since 9/11    – Muslims in government are accused of being Muslim Brotherhood plants, stealth jihadists, and creeping Sharia proponents and should be MARGINALIZED or excluded.  Muslim and Arab organizations and individuals are connected to the infamous Muslim Brotherhood document or theunindicted co-conspirator label, or accused of not condemning Hamas, telling American Muslims not to talk to the FBI, of being “Jew haters”, etc.

When Islamophobes are caught in the act of making up or distorting claims they engage in devious methods to attempt to conceal the evidence.

See Resources for dealing with Islamophobes for many more reasons that these people cannot be trusted.

Sheila Musaji is the founding editor of The American Muslim (TAM), published since 1989.  Sheila received the Council on American-Islamic Relations 2007 Islamic Community Service Award for Journalism,  and the Loonwatch Anti-Loons of 2011: Profiles in Courage Award for her work in fighting Islamophobia.  Sheila was selected for inclusion in the 2012 edition of The Muslim 500: The World’s 500 Most Influential Muslims published since 2009 by the Royal Islamic Strategic Studies Centre in Amman, Jordan.    Biography  You can follow her on twitter @sheilamusaji (https://twitter.com/SheilaMusaji )