By Amago on September 24, 2013 in Feature, Loon Politics, Loon-at-large 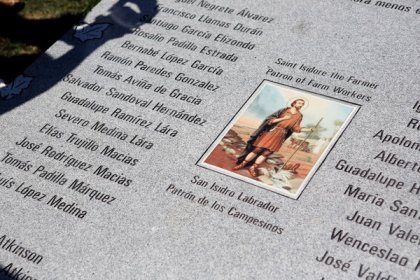 A new grave marker names the Mexicans who died in an airplane crash at Los Gatos in 1948.

The Islamophobia that is alive in this country – from the anti-Muslim legislation to the illegal spying by the NYPD – casts a wide net on Muslims, citizens and non-citizens, similarly to the way it is casted on immigrants. Recently, there was a ceremony at a California graveyard  for the 28 farm workers who were being deported back to Mexico, when in 1948, their plane crashed at Los Gatos.  Unfortunately, after the event, reporters only printed the names of the pilot, co-pilot, flight attendant and an immigration guard but not the Mexicans, the deportees in that plane. They were not recognized. Following this incident, Woody Guthrie penned a famous poem that would later be turned into a song titled Plane Wreck at Los Gatos (Deportee) in protest of the incident:

Some of us are illegal, and some are not wanted, Our work contract’s out and we have to move on; Six hundred miles to that Mexican border, They chase us like outlaws, like rustlers, like thieves. We died in your hills, we died in your deserts, We died in your valleys and died on your plains. We died ’neath your trees and we died in your bushes, Both sides of the river, we died just the same.

Fast forward in 2013, an editorial in the New York Times reminds us that  the treatment of deportees has not evolved one bit:

Mr. Obama speaks of embracing immigrants but has deported nearly two million of them. He and Ms. Napolitano, who left office last week, always said they were focused on catching dangerous criminals, but they cast a wide net that has fallen hard on day laborers, carwash employees, farm workers and others who pose no threat.

How sophisticated are immigration policies if the average working person is being targeted? How just are these policies if we acknowledge their labor but not their humanity? Take for example, The Strengthen and Fortify Enforcement Act, a bill that gives “state and local governments the authority to write and enforce their own immigration laws.” This type of authority has always been reserved as a foreign policy matter, not for local officers who will now turn these civil immigration violations into crimes. Immigration laws have largely been used as a tool to target communities, and we see this especially true in a post-9/11 world. Instead of deportees, there are detainees. David Cole’s Enemy Aliens provide haunting insight on this:

Immigration law has been the centerpiece of the preventive detention campaign. At every opportunity since September 11, Ashcroft has turned immigration law from an administrative mechanism for controlling entry and exist of foreign nationals into an excuse for holding suspicious person without meeting the constitutional requirements that ordinarily apply to the preventive detention.  – David Cole, Enemy Aliens

All though David Cole’s Enemy Aliens was published in 2003, this campaign has taken other forms; the National Defense Authorization Act (NDAA) is an extension of this campaign.  Obama signed the bill at the end of 2011, which includes sections 1021 and 1022. These sections give the government the power to detain not only immigrants but any American without due process. In other words, legal kidnapping. Both detainees and deportees are slapped with similar laws to limit their rights and deny their stay in  this country. Their denial is not based on any constitutional motives but rather a xenophobic culture that fears the other. The preventive detention campaign and the Strengthen and Fortify Enforcement Act both attack their target by using immigration law as the centerpiece. One may wonder what purpose does it serve to target certain communities. A lesson in history will show that immigration and economic woes, political turmoil or war has coincided. Here is  a  history of immigration in the US:

The next bullet point would read: After  9/11,  government programs target Muslims, exclusively, for detainment. Detainees and deportees are in the same struggle. In a country built upon immigrants, we have a systematic way of stripping them of their rights and denying them of their humanity.

The alien was to be protected, not because he was a member of one’s family, clan, religious community, but because he was a human being. In the alien, therefore, man discovered the idea of humanity. – Herman Cohen, Opening quote used in Enemy Aliens