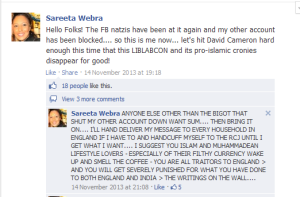 An Expose by Steven Rose

Sikhs Against Sharia (SAS) are somewhat of an anomaly.  They are an informal organisation that largely exists on Facebook, where most members are white nationalists and non-Sikh.

However, several days ago, Sareeta Webra, founder of Sikhs Against Sharia, and Stephen Gash, of Stop Islamisation of Europe, applied for a Cambridge County Court injunction to prevent a mosque being built.

Their justification is found in a rambling press release that makes many unsubstantiated claims. Perhaps most offensively, they suggest that a majority of Islamic charities are fronts for terrorism.

They also believe that Cambridge “is the last bastion of Christianity in England and must not fall to Islam.” But this is nonsensical as Muslims remain a religious minority (4.8 per cent) compared to Christians (59 per cent).

Sareeta Webra even attempts to exploit religious differences by stating: “As a first generation English Sikh I am alarmed at how Islamic discrimination against non-Muslims is defended, condoned and even encouraged, by the British establishment.”

The injunction failed but they now have grounds for appeal.

Sikhs Against Sharia maintain they are not anti-Muslim but that statement rings hollow. A quick search of their Facebook wall reveals a plethora of Islamophobic abuse.

For example, one member recently shared a picture of a nuclear explosion with the caption ‘The Future of Mecca.’

Others use dehumanising language, “So when a Musrat says he don’t eat meat unless it’s Halal he lies!!! He muffs a goat at least once a day,” such crass remarks are followed up with badly doctored images.

Sareeta Webra has a noted history with the British far-right. In 2010, she was part of an English Nationalist Alliance march that took a petition to Downing Street calling for the end of Sharia Law in the UK. In that same year, she also spoke at an EDL rally in Dudley, which was later posted on Jihad Watch.

Years later, and her admiration for Tommy Robinson is unwavering. When learning of his departure from the EDL, she praised him as a ‘legend’ and a strong leader.

Varinder Singh, from the Turban Campaign, described the injunction as a cheap and damaging publicity stunt. He stated:

“We are disappointed to learn that Sikh history is being misrepresented by individuals with violent far-right connections in order to incite religious intolerance and obstruct the development of a much-needed place of worship.

The messages shared by these individuals are diametrically opposite to the core Sikh values. One of the main messages in our faith is the concept of “Sarbaht dah Phahla” which means “blessings for everyone” or literally “may everyone prosper”.

Both Muslims and Sikhs share a rich joint-heritage since the birth of the Sikh faith in the northern plains of India. It should be noted that the holiest shrine of the Sikhs – the Golden Temple in Amritsar, Punjab, had its foundation stone laid by a Muslim saint (Mian Mir).

Sareeta Webra’s views are not those of the British Sikh Community and have no mainstream support. We are particularly concerned at the damage Sareeta Webra’s actions will do to interfaith harmony between British Muslims and Sikhs.”

This attempted injunction is a reflection of a growing far-right tactic to target mosques during the planning stages. (Lastly, we have sent a specific tweet from Sareeta Webra which verges on incitement against the Director of TELL MAMA to the police.)