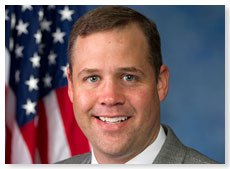 Republican Congressman Jim Bridenstine of Oklahoma was at a Tea Party event with constituents a few weeks ago when a woman went off about how President Obama needed to be killed.

The woman explained some bizarre conspiracy theory about the President “shipping” Muslims into our country through pilots and commercial jets.” She then exlained that, of course, President Obama needs to be executed as an enemy combattant.

All the while, Bridenstine looked on and offered no disagreement, or recognition of the fact that the woman had potentially just committed a crime.

“Obama, he’s not president, as far as I’m concerned, he should be executed, he’s an enemy combatant… the Muslims that he is shipping into our country though pilots and commercial jets… what’s, what this… I can’t tell you, I can’t say, because this is a public place, this guy is a criminal, and nobody’s stopping him.”

RightWingWatch, which discovered the Bridenstine video, has more on the “shipping Muslims” conspiracy. It’s, of course, based on the notion that President Obama is a secret Muslim, and therefore has stealth plans to ship 50 to 100 million Muslims from the Middle East to America, so that he can turn our “Christian” nation into a “Muslim” one.

So, in fact, the woman was being racist too. And not a peep from Rep. Bridenstine.

The event is illustrative of just how taken-over by extremists the GOP has become.  Racism, and overt calls for the President’s death, are all ignored by Republican congressmen who will do anything to curry favor with the fringe that now controls their party.

Two weeks after the event, after facing a lot of criticism for remaining silent, Congressman Bridenstine did what any good Republican would do: He took umbrage at the fact that anyone would be upset at his silence in the face of a call for the assassination of the President: 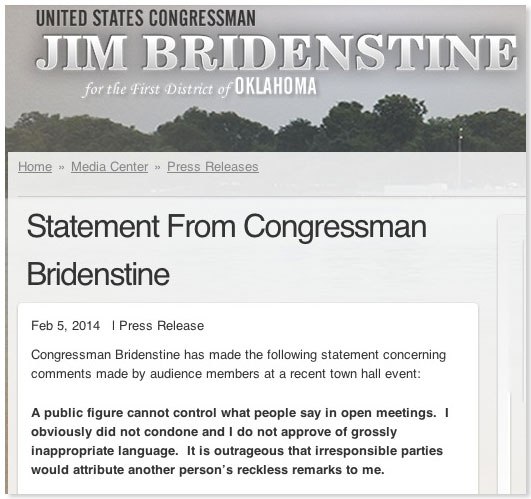 Yes, how dare anyone criticize a US congressman for sitting there and not saying a word when a constituent tells them that the President of the United States should be killed.  It’s a sign of how extreme the GOP has become that Bridenstine thinks it’s outrageous that anyone would expect him to counter the woman’s racist, extremist rhetoric.  Even John McCain, during the 2008 campaign, stopped a woman at a campaign event from calling President Obama “an Arab.”  But that was six years ago.  Oh how the party has changed.

Oh, and when you watch the video, listen to Bridenstine closely.  You might be surprised to find out that he’s virulently opposed to gay marriage as well.  (Will the rightwing ever find a “defender of marriage” who doesn’t come across like a BOG?)