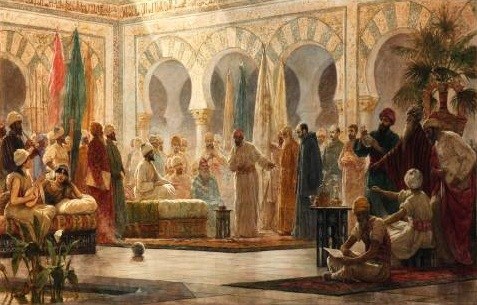 One often hears Islamophobes in the “counterjihad” movement claiming to be defenders of the “Judeo-Christian” West against the spread of Islam and the enfranchisement of Muslims in Western democracies. The term Judeo-Christian gained currency in the middle of the 20th century,

“promoted by groups which evolved into the National Conference of Christians and Jews, to fight antisemitism by expressing a more inclusive idea of American values rather than just Christian or Protestant.”

Ironically, in the past several decades and especially since 9/11, Judeo-Christian has most often been used by the rightwing to exclude differing religions and cultures from staking their own claim to Americanness, specifically, to amplify the so-called “Islamic threat.”

The rightwing considers America’s “uniqueness” to be rooted in its Judeo-Christian values. Take radio host Dennis Prager, who writes,

[o]nly America has called itself Judeo-Christian. America is also unique in that it has always combined secular government with a society based on religious values. Along with the belief in liberty—as opposed to, for example, the European belief in equality, the Muslim belief in theocracy, and the Eastern belief in social conformity—Judeo-Christian values are what distinguish America from all other countries.

The claims about “European,” “Muslim,” and “Eastern” societies are simplistic generalizations but there is some truth to Prager’s claim that “only America has called itself Judeo-Christian,” in so far as the USA is where Judeo-Christianism was born. If one can speak in such broad terms at all of an alliance/unity between Jews and Christians it is relatively recent; only 70 years out of the past 2,000 years.

A different kind of alliance

A recent article published on Loonwatch about the Spanish government’s commitment to give descendants of Sephardic Jews expelled over 500 years ago from Andalus automatic citizenship brought to mind the longer and deeper history of Jewish and Muslim collaboration.

The history of Jewish-Muslim alliance has led some scholars to the interesting thesis that the roots of medieval European Christian anti-Semitism was rooted not in charges of deicide (Jews killed Jesus) against Jews but in their alliance and collaboration with Muslims.

In Allan Harris Cutler and Helen Elmquist Cutler’s book, “The Jews as Ally of the Muslim,” the authors,

[R]evise the traditional explanations of the roots of anti-Semitism. They contend that the great outburst of anti-Semitism in Western Europe during the Middle Ages … derived from primarily anti-Muslimism and the association of Jew with Muslim.

Islamophobe Daniel Pipes, in one of his less bellicose and polemical articles wrote a review of the book in 1987 that is worth reading, concluding that “it offers an intriguing and ultimately convincing argument.” Though he takes exception to the authors’ advice to Pope John Paul II to “transform his office and mission from a more narrowly Christian into a broadly Abrahamic one . . . to create a new spiritual and institutional unity between Jews, Christians, and Muslims.”

Among certain nationalists and White Power currents in the “counterjihad” there is a continuation of the idea that Jews are allying with Muslims to help them take over the West, just as Jews aided Muslims in conquering Hispania from Visigoth tyranny.

In the view of these counterjihadists Jewish intellectuals have opened the gates of fortified Europe and America through modern day liberalism. Hence, their usage of “Leftist” in the familiar Islamophobic expression, “Leftist-Muslim alliance to destroy the West,” is a P.C. way to refer to Jews. “Leftist” masks an undercurrent of antiSemitism, since in their view Jew=Leftist.

The website Islam Versus Europe: Where Islam Spreads, Freedom Dies, did a three part series titled, “Jewish collaboration with Muslims during the invasion of Spain” by Cheradnine Zakalwe. The website has a global Alexa ranking of 703,552 and a US ranking of 262,275. 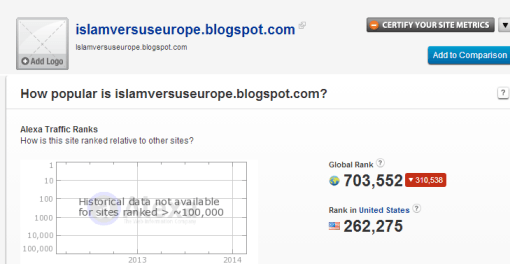 IslamVersusEurope is considered by other “counterjihadists” to be a “respected CounterJihad blog” and is linked and blogrolled on numerous Islamophobic sites. The site has also been approvingly linked by Deacon Robert Spencer even after Zakalwe’s series of articles. (Not surprising considering Spencer’s alliance with antiSemites such as Eric Allen Bell and the anti-Jewish stances of his ally Pamela Geller). 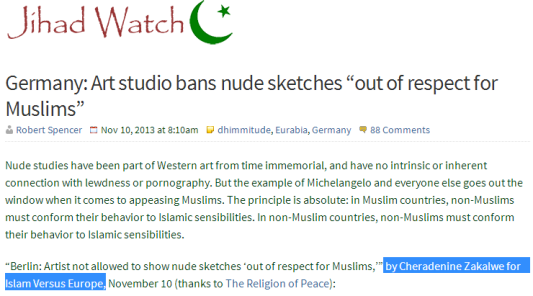 The main point of Zakalwe’s three part series is summed up in his first post,

So the Jews in Spain were enslaving European Christians. This provoked the irritation of other European Christians, who then took measures against the Jews. This caused the Jews to reach out to their fellow Jews abroad and to the Arabs, urging them to invade Spain and bring this Christian oppression to an end. When they did so, the Jews eagerly collaborated with the Muslims, acting as administrators for the conquered cities and realm.

The parallels with our own time are striking, with Jewish intellectuals having paved the way for the modern Muslim conquest by pushing the benefits of immigration, diversity, tolerance, special minority protection, etc., denigrating nationalism and wielding the Nazi stick forcefully against anyone bold enough to dissent. (Emphasis mine)

These views are not limited to Zakalwe but can also be found on unabashedly racist and Islamophobic sites like Occidental Dissent and Occidental Observer.

The truth is that yes, there was a long history of collaboration and affinity between Muslims and Jews which fueled animosity on the part of European Christendom. Pipes in his review of the Cutlers’ study even notes,

[T]he Hebrew language shares much with Arabic, and Judaism shares much with Islam; on the most abstract level, both are religions of law, while Christianity is a religion of faith. More specifically, they share many features such as circumcision, dietary regulations, and similar sexual codes. Further, because the Muslims were preeminent in the medieval centuries, “Jews themselves associated Jew with Muslim.” When this became known among the Christians, it much harmed the Jews’ position. Most damaging of all, Jews on occasion helped Muslim troops against Christians (as in the initial Arab conquest of Spain) and some Jews held prominent positions in Muslim governments at war with the Christians. Even when they did not actually take part in the fighting, “Jews usually rejoiced when Christian territory fell into Islamic hands.”

While there were great similarities and affinities, it must be pointed out that it is only logical that Jews would ally with those who would treat them better and with whom relations would be more advantageous. If medieval European Christians were offering less discrimination and interference in religious, family and financial life than Muslims then certainly Jews would have collaborated with Christians more than Muslims. In other words one cannot discount the importance of community interests, foremost survival as the motivation for such alliances.

This was driven home to me while watching the third season of Showtime’s historical drama, The Borigas. In one of the episodes, the leader of the Jewish community, Mattai meets with Pope Alexander,

Mattai meets with Alexander and tells him the whole Turkish navy could be burned to the waves with oil. He proposes stuffing some ships with oil for Ramadan and sending them over there just in time to berth for the holy month. Once they’re there, Mattai’s connections will set them alight. That’s if Alexander issues a papal bull that eases up on the taxes on the Jews in Rome. Alexander moans that he asks for a great deal, but Mattai refuses to back down, and even gives Alexander a bit of lip…He says he needs money to buy all this oil, and Alexander says that he’ll issue the bull if Mattai can ensure the success of this scheme.

Alexander meets with Mattai, Cardinal Sforza, and a few others. Mattai tells him the ships loaded with oil are already docked and the conflagration may have already happened.

In Constantinople, oil leaking out over the water is set alight, swiftly engulfing the anchored ships.

Back in Rome, Alexander sits and signs the papal bull, while in Constantinople, the ships explode and sailors flee for their lives. In a fantastic long shot, we see the entire fleet from a distance, burning away.

While the actual historicity of these events are dubious and likely never occurred, it highlights the reasons and motivations that guide communities. Jews who aided Muslims in Spain did so not primarily because both Muslims and Jews circumcise males or eschew pork but rather because they trusted that they would have a better and freer life.

The “counterjihadists” know that “perfidious” Jews aren’t opening up the gates to Muslim hordes. It is no longer the 14th century, there isn’t a “Christendom,” let alone a “Caliphate.” Many Christians are united alongside Muslims and Jews and others to make society and the world better, that is what the interfaith movement is all about.

Opening our doors to the stranger, seeing the image of G-d in our fellow human being and their inherent dignity should not be the opposite of our values but the very core of what we struggle to achieve and become.

This however is appeasement to the paranoid and conspiratorial “counterjihadists,” who in the place of our multi-faith and multi-cultural reality want to take us back to an unrealistic mono-faith, mono-cultural world.