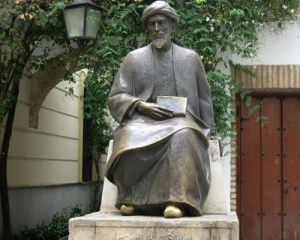 March 30 marks the birthday of Moses Maimonides. As such, it seemed to be a good time to discuss two of his quotes that have been used in discussions of Islam and Islamophobia in part due to the range of views that seem to be expressed in them by the same author.

Recently, Robert Spencer tried to make a distinction between Allah and God, arguing that “even though they may share a name, any examination of the particulars of Christian and Islamic theology reveals that the deities in question are quite different in character.”

Note that Spencer does not say that Christians and Muslims have “different views of the same deity” but discusses “the deities in question.” In doing this, he invites the reader to reach the conclusion that the “Muslim Allah” is not the same as the “Christian God.” Danios has already provided a thorough explanation on the use of the term Allah by Jews and Christians in pre-Islamic times. As Danios points out, a common Islamophobic response is to claim that Muslims appropriated the term Allah while referring to a different entity, perhaps a moon god, but not to the god that Jews and Christians worship.

To further create a distinction between Allah and the Christian God, Spencer has asked whether the hajj is an act of apostasy based on his claims that the rites involved in the hajj are of Hindu origin. Of course, it is widely accepted that polytheists made pilgrimages to Mecca and that the Ka’bah was a pagan shrine that contained idols before the advent of Islam, including a belief that pre-Islamic pilgrims to Mecca, “[w]ith all their polytheism and idolatry, they too used to circle the Ka’bah and kiss the Black Stone.” So, even if Spencer were right, that would not seem to be a particularly Earth-shattering revelation.

Since many who propound this “deities” theory won’t listen to Danios perhaps they will listen to some other views. We can start by moving a little away from the Christian-Muslim deity distinction that Spencer wants to draw and referring to a statement by perhaps the most renowned post-Biblical Jewish scholar, Rabbi Moses Maimonides (Rambam). In Responsa #448, Maimonides writes as follows (ellipses in Wikipedia, bolding added; alternate translation also available):

The Ishmaelites are not at all idolaters; [idolatry] has long been severed from their mouths and hearts; and they attribute to God a proper unity, a unity concerning which there is no doubt. And because they lie about us, and falsely attribute to us the statement that God has a son, is no reason for us to lie about them and say that they are idolaters … And should anyone say that the house that they honor [the Kaaba] is a house of idolatry and an idol is hidden within it, which their ancestors used to worship,then what of it? The hearts of those who bow down toward it today are [directed] only toward Heaven … [Regarding] the Ishmaelites today – idolatry has been severed from the mouths of all of them [including] women and children. Their error and foolishness is in other things which cannot be put into writing because of the renegades and wicked among Israel [i.e., apostates]. But as regards the unity of God they have no error at all.

Maimonides’ life covered various phases of Muslim-Jewish relations. Maimonides was born in Córdoba in 1135, at the tail end of the longest potential extent of the “Golden Age” of Spanish Jewry, which saw the blossoming of Jewish culture and the attainment by individual Jews of high positions in commercial and public life. As a result of the Arab political dominance, Maimonides knew Arabic, read many texts in Arabic, and composed many of his most famous works in Arabic and referred to God as Allah in his Arabic writing.

In 1148, Córdoba was conquered by the Almohads, an Berber-Muslim dynasty that revoked the dhimmi status of Jews. There is, no doubt, much debate about the quality of the life of a dhimmi, but scholars have noted that “in any historical case, these relatively abstract and general provisions of the dhimma could and did materialize as either a tolerant and even liberating arrangement, or at the other extreme, a culturally repressive policy within which religious freedom is a hollow formality.” (María Rosa Monocal, The Ornament of the World: How Muslims, Jews and Christians Created a Culture of Tolerance in Medieval Spain,” p. 73. Garibaldi reviews the book here.) Life for Jews under the Almohads went from the previous tolerant and liberating arrangement to the other extreme, with the result that “[m]any Jews were forced to convert, but due to suspicion by the authorities of fake conversions, the new converts had to wear identifying clothing that set them apart and made them available to public scrutiny with many forced to convert or go into exile.” The point of this is not to dwell on history, but to put Maimonides’ responsa into context. It was written not by someone who had experienced only positive relations between Muslims and Jews, but who had also witnessed among the harshest of relations. And one should note that after fleeing Córdoba, Maimonides eventually again found himself in a place where he could establish good relations with Muslim authorities, becoming court physician to Saladin.

So, what does Maimonides have to say about how Muslims view God? Returning to the quote, we see that Maimonides says that “[idolatry] has long been severed from their mouths and hearts.” This, is in fact the same story told in Islam’s view of its own history: before Muhammad, the Ishmaelites (as Maimonides refers to them) in and around Mecca were idolaters. But, since the advent of Islam, “they attribute to God a proper unity.” The Islamic term for a “proper unity” is tawhid, which, in essence, is not just a superficial form of “unity” but a “proper unity” that has an influence on Islamic philosophy and jurisprudence. It is also possible that Maimonides was even distinguishing between the “proper” Jewish and Muslim view of God’s unity and what he would consider the “improper” Christian view of a trinitarian unity. Nowhere does Maimonides even suggest that Muslims are worshiping some different deity or that they do not share the Jewish view of God’s character.

Maimonides further argues that “should anyone say … [the Kaba’a] is a house of idolatry and an idol is hidden within it, which their ancestors used to worship, then what of it? The hearts of those who bow down toward it today are [directed] only toward Heaven.” This can be read as a pre-rebuttal to arguments made by Robert Spencer about the Kaba’a and the hajj based on views, true or not, about their pre-Islamic origins. As Maimonides points out, if Muslims view Allah as the same god Jews view in Heaven and direct their prayers accordingly, pre-Islamic history does not affect their monotheism. Say what you want about any possible idol remnant in the Ka’bah or the etymology of the term Allah, it is clear that the “hearts of [Muslims] today are only toward Heaven.”

Now, why is Maimonides such an interesting person to quote from when countering Spencer’s Islamophobic rhetoric? For one thing, Spencer’s polemical partner Pamela Geller has also quoted from Maimonides, believing that it helps the position that she and Spencer take in general and in her fights about her ads about a choice “between the civilized man and the savage” in particular. Here is a quote she uses, from Maimonides’ Epistle to Yemen:

Let Ye understand, my brothers, the Holy One Blessed HE through the trap created by our iniquities cast us amongst this nation, the people of Ishmael [Muslims] whose oppressiveness is firmly upon us and they connive to do us wrong and despicably downgrade us as the Almighty decreed against us (Deuteronomy 32:31, “Your enemies shall judge you”).

There never came against Israel a more antagonistic nation. They oppress us with the most oppressive measures to lessen our number, reduce us, and make us as despicable as they themselves are [Psalms 120:5].

Geller, misleadingly introduces this quote by saying that Maimonides “said this of Islam.” She further introduces the purely religious term Muslims in brackets where Maimonides referred to the “people of Ishmael,” a term that could have ethnic, political, and/or religious connotations.

On the religious aspect, while Maimonides did not accept Islam, it is clear from the earlier quote that he fully accepted that Muslims, or Ishmaelites, were monotheists whose hearts are directed only toward heaven in prayer. Instead, the conflict he describes is a political one, in particular with the Yemeni Shi’a of the time. Ultimately, “Maimonides interceded with Saladin in Egypt, and shortly thereafter the persecution came to an end.”

There are a few additional points worth noting in this quote from Maimonides. First, the reference to “the people of Ishmael” may sound like a form of generalization today, but no more so than the positive references to Ishmaelites in the first Maimonides quote or his reference to Jews as Israel in the second.

Second, unlike Geller, Maimonides does not attempt to create a picture in which one side is civilized and the other savage. Indeed, Maimonides describes Israel’s exile as a “trap created by our iniquities.” Traditionally, this referred to the “baseless hatred,” or the religious and political disputes, mistakes, violence, and venom that existed at the time of the destruction of the Second Temple and the onset of the Exile. Thus, Maimonides’ approach was not to turn a political dispute or suffering persecution into a basis for misrepresenting the religious views of others. Nor did he argue that those of his religion were pure and those of another religion were not; rather, he pointed out sinful behavior in both. In Maimonides’ view, monotheism was a good quality, and, from the first quote, we see that he was able to acknowledge what he saw as the good in his political opponents rather than feeling the need to suppress any of those qualities or actions as if his entire position would fall apart if his political adversaries had any good side. In addition, when Maimonides corresponded with a community of Jews who were being persecuted by a Muslim majority, he made a point of noting that even the Jews who then felt persecuted should not ignore their group’s own history of hatred and violence, including political mistakes that were part of the reason for their exile.

While there are aspects to the two quotes from Maimonides that one can agree or disagree with, they do reflect an overall attitude that contrasts sharply with those of Spencer and Geller.

While Maimonides had political differences with various Muslim groups, he did not seek to mischaracterize their religion or their religious beliefs. For there can be no true peace with the Other without recognition of the truth of their beliefs and behavior and honest dialogue based on those truths, a sharp contrast to the insidious Spencer/Geller policy of no peace, no truthful recognition, and no honest dialogue. Compare Maimonides’ recognition of Islam’s positive monotheistic quality, even when he disagreed politically with Muslims, with Spencer, who has argued that “the only good Muslim is a bad Muslim,” meaning that in his view, the only morally good Muslim is one who is not an Islamically good Muslim.