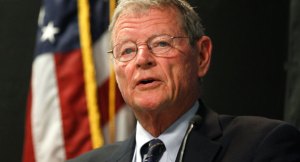 James Inhofe Opines On How Obama ‘Suppresses Our Judeo-Christian Values’

The senior senator from Oklahoma held forth on the Senate floor on the greatness of George Washington, marking the 225th anniversary of the first president’s inaugural address.

Inhofe argued that Washington made clear the Christian God was responsible for the creation of the United States.

He then suggested that Obama is betraying that holy gift, attributing the implication to his constituents.

“Oklahomans regularly ask me — and I don’t really think this is unique just to Oklahoma, I think it can be in almost any state — but how they regularly ask me why we have an administration that suppresses our Judeo-Christian values while praising Islam,” Inhofe said.

He also seemed to say that he agrees with that take on the Obama administration.

“I find it sad that our nation does not have the same belief today that we had back when Washington was president,” Inhofe said. “We’ve become arrogant, inward-focused individuals. Rather than submit to God’s authority, we define truth, justice and morality by what feels good at the time. Today instead of having leaders that protect the church from government, we have leaders that believe it’s government’s job to impose on churches what should be universally upheld as truth.”