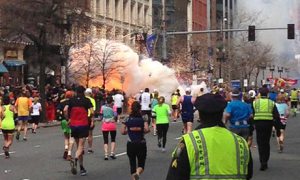 Todashev: Agent involved in shooting had a questionable history by B Blake

Ibragim Todashev’s death
The Florida State Attorney recently cleared the FBI agent who fatally shot Ibragim Todashev at his Florida home of any wrong doing in the in May 2013 incident. Jeffrey L. Ashton ruled the shooting was reasonable in that: ‘the actions of the Special Agent of the FBI were justified in self-defense and in defense of another’.The unnamed agent was also cleared by an FBI internal review of the shooting, which occurred at the end of a lengthy interrogation into Todashev’s relationship with alleged Boston marathon bomber Tamerlan Tsarnaev, and his purported role in the Waltham triple murders of 2011.

According to the reports, Todashev was in the process of writing a confession to the Waltham homicides when for no apparent reason, he ‘flipped out’ and propelled a coffee table into the air, striking the agent on the back of his head. He then ran to the kitchen area of his apartment and armed himself with a red pole/broom handle.

Curtis Cinelli, a 42 year old State Trooper assigned to the Massachusetts Violent Fugitive Apprehension Unit who was also present during the incident, said he thought he was about to be impaled and was in fear for his life. The unnamed agent then shot Todashev several times resulting in his death.

Aaron McFarlane
Recent un-redacted documents revealed the unnamed agent to be Special Agent Aaron McFarlane, 41, of Windham, New Hampshire. Little is known of McFarlane’s history as an FBI agent, although he was assigned to Boston’s Bank Robbery Task Force Squad for a number of years, before being reassigned to an unknown squad in 2012.Prior to becoming a Federal agent, Aaron McFarlane was employed as a beat officer with the City of Oakland Police Department, California.

McFarlane first came to the attention of others when he testified in the now infamous ‘Riders’ case of 2003.

Riders and McFarlane
The ‘Riders’ case was the biggest police corruption scandal ever witnessed by Oakland Police Department. It cost the Department nearly  $11 million to settle civil lawsuits by 119 people who claimed they were falsely arrested, beaten, and had evidence falsified against them. The plaintiffs also alleged that Oakland Police Department turned a blind eye to the police misconduct.Three officers, Clarence Mabanag, Jude Siapno, and Matthew Hornung, stood accused of 26 counts that included kidnapping, assault, conspiracy, false arrests and lying in police reports to cover their tracks. The alleged activity of the officers came to light after a colleague, Officer Keith Batt, complained about the group’s brutality and abuse of civil rights. A fourth officer, Francisco Vazquez, said to be the group’s ringleader, fled the country after charges were filed against him.

Aaron McFarlane testified in defense of Clarence Mabanag, stating that he had always taught him how to write accurate police reports. However, under cross-examination it was alleged that McFarlane had falsified his own reports at the request of the group’s leader. Prosecutor David Hollister presented McFarlane with the reports in court, which appeared to contradict his earlier testimony.

After an uncomfortable exchange between the two, Aaron McFarlane went from defending Mabanag, his former field training officer, to invoking his Constitutional right to remain silent.

Jurors failed to reach a verdict on the majority of the charges against the three and they were tried a second time, with a similar result. After five years and two mis-trials, District Attorney Tom Orloff said that although he was ‘convinced of their guilt’ he would dismiss the charges as he did not believe a jury would convict them.

McFarlane was never charged in connection with falsifying police reports or for potentially telling untruths on the witness stand.

McFarlane sued
On November 14th 2003, Robert Girard filed a civil suit against Aaron McFarlane and his Oakland PD colleague, Steven Nowak, for aggravated battery, false arrest, violation of his civil rights and emotional distress.Girard stated he had been stood near the entrance to Highland Hospital, Oakland, California, when he witnessed McFarlane and Nowak physically beating an individual who had already been subdued. Girard took a photograph of the incident as it took place and when McFarlane and Nowak realized, they attacked him.

The plaintiff alleged he was beaten, kicked and punched around the body, suffering injuries to his shoulder, arm, knee and neck. He claimed he was then falsely arrested by McFarlane and Nowak.

The case was eventually dismissed when the City of Oakland Police Department paid Robert Girard a $10, 000 settlement.

Neither McFarlane or Nowak faced charges over the incident, even though Nowak had a long record of police brutality suits filed against him. In fact, as of 2004, Oakland PD had paid out just under seven-million dollars in relation to suits specifically naming Nowak as a defendant.

Pair faced litigation previously
Aaron McFarlane and Steven Nowak had been sued previously by a Mr Michael Cole, who filed his compaint on March 26 of the same year (2003). The full details of the complaint are unavailable, although the pair were accussed of beating the plaintiff with a ‘hand foot and billy club’ then falsely imprisoning him.Michael Cole’s claim was settled with a  $22,500.00 pay out. It is unclear if the incident was connected to Robert Girard’s case. Again, neither McFarlane or Nowak faced charges over the incident.

Questionable circumstances
In his short time as an officer with Oakland Police department, Aaron McFarlane was accussed of falsifying police reports, lying under oath, aggravated battery, making false arrests, violating the rights of suspects, assault with a weapon and false imprisonment. (He was never convicted of any of these charges)Was he simply the victim of an over-zealous prosecutor and malicious reports? Possibly, although his actions on the witness stand and the settlements paid to plaintiffs could suggest otherwise.

It must be acknowledged that the allegations leveled at McFarlane all relate to incidents that occurred a considerable amount of time ago, prior to him becoming an FBI agent. Other than the questionable circumstances surrounding the death of Ibragim Todashev, it is not known if Aaron McFarlane has ever been involved in any other incident.

If left up to the FBI, its not likely to be known either. They didn’t even want the public to know his name.