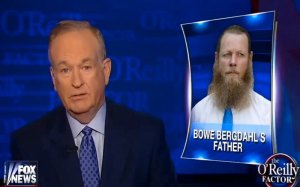 I was going to satirize the whole anti-Muslim fervor that has sprung up since Bob Bergdahl’s infamous invocation of the “bismillah” in the White House rose garden caused  Conservatives and Islamophobes everywhere to have a collective heart attack but Dean Obeidallah beat me to it.

There is some more interesting aspects to the story that I hope to cover but read and share this hilarious article.:

Bill O’Reilly isn’t just an awe-inspiring successful television host, he’s also “The Muslim Hunter.” His Islamadar is so strong he can instantly tell if a person is a Muslim.

We saw O’Reilly’s superhuman Muslim-hunting powers on display Wednesday night as he made the case for why Robert Bergdahl, the father of the POW released by the Taliban, was likely a Muslim. Sure, Bergdahl can claim all he wants that he’s a devout Presbyterian, but Bill won’t betaken in by that spin.

Instead, O’Reilly, in his typically insightful style that has made him the darling of angry, old white people across the country, stated: “The reason I said that Robert Bergdahl looks like a Muslim is because he looks like a Muslim.” Bingo! Journalism at its best!

Bill then graciously shared with us a glimpse into his Muslim identifying genius. He listed three O’Reilly factors that prove his theory about Bergdahl: “A) He absolutely looked like a Muslim. B) He talked in Pashto, the language of the Taliban. And C) He thanked Allah.”

Being a mere mortal who lacks O’Reilly’s keen Muslim hunting skills, I would’ve never realized that Bergdahl looked like a Muslim as he stood next to President Obama earlier this week at the White House. Bergdahl was dressed in a white dress shirt with a blue tie and sporting plain pocket khaki pants. Could this mean that every assistant manager at The Gap is a crypto-Muslim?

But then I saw what O’Reilly meant: Bergdahl has a beard! Yes, of course, how could I miss that?! Bergdahl hadn’t grown a beard like he told reporters in 2012 as a way to better understand the world his son was being held captive. Nope, he did it because he’s a Muslim. Apparently, the hipsters I see in Brooklyn are not trying to be cool, they are actually Muslims. And the Duck Dynasty dudes must be really, really devout Muslims.

O’Reilly, of course, nailed factor #2: Pashto is the “language of the Taliban.” Some would argue that Pashto is simply the language spoken by the 50 million plus Pashtuns who live in primarily in Afghanistan and Pakistan. Or that Bergdahl learned Pashto so he could make a direct plea to his son’s captors via YouTube videos to save his life.

And lastly, O’Reilly noted that Bergdahl thanked “Allah.” To be honest, that was a gimme. Everyone knows that if you thank “Allah,” you’re clearly a Muslim, including the thousands of Arab Christians who use the word Allah for God every day. It moments like these that make me realize that O’Reilly is very special.

But O’Reilly is not alone at Fox News in possessing super powers in understanding Muslims. There’s also Sean Hannity and Fox News contributor Allen West. Fox News is like the X-Men when it comes to Islam.

West, the former one term Republican Congressman, thankfully exposed Bergdahl’s nefarious Muslim plot which most of us would have missed. You see, while Bergdahl was standing next to Obama at the White House, he stated in Arabic: “In the name of God, most gracious, most compassionate.” So what, you ask? Don’t you get it?! As West noted, by saying those words, Bergdahl hasclaimed the White House for Islam!

Damn, that West is good. I have to admit being a Muslim myself, although I don’t sport a beard, West has figured out our greatest power. By simply saying those nine simple words we can magically claim anything for Islam, presto-chango. I do it all the time. Just yesterday I claimed a local deli, a small poodle and a Bed, Bath and Beyond. Plus we can claim people. In fact, boom, I just claimed Allen West for Islam—look forward to seeing him at the meetings.

Not to be out done, last night on Fox News, Sean Hannity showed off his Muslim explaining powers by claiming that these nine magic words are actually a, “war cry for Allah.” And then something horrible happened: one of Hannity’s guests said those words out loud and inadverntly claimed Fox News for Islam. Awkward.

The reality is that the phrase that has caused West’s and Hannity’s Islamadar to start flashing, is simply a blessing from the Koran. It’s similar to the Jewish blessing that begins “Baruch atah Adonai” that praises God or the opening lines of the Christian “Our Father.”

Now, what super Muslim sleuths Hannity and West must know, but for their own superhero reasons didn’t want to reveal, is that this Muslim blessing was likely first said in the White House in 1805 when Thomas Jefferson held the first Iftar, the meal that breaks the daily fast during Ramadan. And Iftar dinners have been an annual traditon at the White House starting with Bill Clinton and continuing every year in both George W. Bush and Obama’s administrations. That means the White House long been claimed for Islam!

Despite that, we should be thankful we have people protecting us like O’Reilly, West and Hannity. Without these Muslim-hunters, we would be left unable to identify Muslims amongst us or their magical powers.