By Emperor on September 8, 2014 in Loon Violence, Loon at large 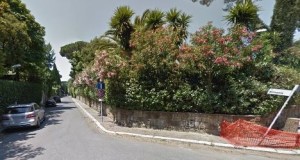 The killer had been living on Via Birmania in Rome’s Eur neighbourhood since June.

A man who was obsessed with fighting for Israel beheaded his maid. Oksana Martseniuk was brutally killed by Federico Leonelli who appears to have been radicalized over the internet by watching videos.

I wonder if the likes of Bill Maher, who devoted a segment of Real Time to interview Brigitte Gabriel after a Muslim beheaded his wife, will be covering this on his next show? Is this going to be blamed on Radical Judaism? On Zionism? The way the beheadings of journalists by ISIS have been blamed on Islam or “Islamism?” (h/t: Razainc.)

Federico Leonelli, 35, was shot outside a gated house in Rome on Sunday morning, after allegedly beheading 38-year-old Oksana Martseniuk.

Homeowner Giovanni Ciallella has now said that his guest Leonelli was obsessed with “the military world” and wanted to fight in Gaza alongside the Israeli army.

“He told me that he had met a rabbi in Rome and was ready to join the Israeli army against Hamas and terrorists armed with missiles,” Ciallella told La Repubblica.

Leonelli had been an atheist when the pair worked together in the IT sector a decade ago, although had recently discovered his Jewish heritage and immersed himself in religious texts.

“He started to study the Torah, the Talmud and once he stopped to speak about the Old Testament with me.

“Then he searched on the internet and saw dozens and dozens of videos. At night he watched films by rabbis at full volume which informed him of what was happening in the Gaza strip,” Ciallella said.

Leonelli had twice been denied a visa to travel to Israel and wanted to take the issue up with the consulate in Rome, to “sign up at any cost”, his host added.

He had suffered a “huge breakdown” following the death of his girlfriend, Ciallella said, and moved in with his mother. She, however, had a stroke and Leonelli’s sister had taken over the house, allegedly forcing him to move to his father’s home and later a student house.