By Garibaldi on September 16, 2014 in Feature, Loon Pastors 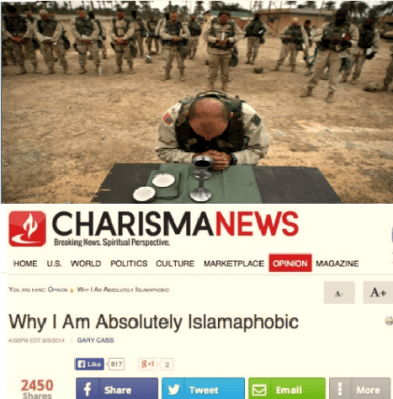 Right Wing Watch recently brought to our attention the Christian dominionist, Gary Cass’ call for Holy War against Muslims, in an article titled, “I’m Islamaphobic, Are You?” Cass is a former San Diego GOP official and founder of the organization “Defend Christians: A Ministry of the Christian Anti-Defamation Commission.”

Cass’ article was originally published on the website of the popular Evangelical Christian magazine, Charisma. The article was pulled down without any apology or note as to why it was published in the first place or why it was subsequently pulled; it is still proudly displayed on Cass’ website.

Many Christian writers and commenters were deeply offended by the bellicose religious hatred and call to violence in the article, deeming it “Anti-Christ.” A minority of Christians however supported the article as can be witnessed in the comment section to Cass’ article.

Cass writes in racialist terms about Muslims, stating for instance that the “vicious seed of Ishmael” must be “crushed.” This characterization of Muslims is based on a particular interpretation of Genesis 16:11-12 that some Christians such as former Florida congressman Allen West have forwarded about Islam, Arabs and Muslims.

Cass says that what ISIS is doing is real Islam and we should thank them for their actions, which is the same vile view propagated by the likes of Deacon Robert Spencer.

ISIS (sic) is doing to America journalists what every true follower of Mohammed wants to do to you and yours; subjugate or murder you. They believe they have been given a mandate by Allah (Satan) to dominate the world.

Cass proposes three possible “solutions” and in fact only one “real solution.”:

1.) Conversion: Wouldn’t it be wonderful to see Muslims turn from Satan (Allah) to Christ? But, I agree with Phil Robertson, this is not biblically doable. Why? God has a plan and he revealed it at the birth of Ishmael, the father of the Arabs. “The Angel of the Lord said….He [Ishmael] will be an ass of a man; His hand shall be against every man, and every man’s hand against him…” (Genesis 16:11,12) The Arab Muslims are God’s sworn enemies and are ordained by God to be against everyone. That’s not to say there will not be a small percentage of Muslims who will be saved by faith in Christ. But, even if they escape with their lives after “apostatizing” from Islam, their influence will be negligible. History does not record a mighty move of God in saving masses of Muslims. I believe the scriptures militate against mass Muslim conversions.

2.) D.A.M.N.: Depart All Muslims Now. Deport them like Spain was forced to do when they deported the Muslim Moors. Muslims in America are procreating at twice the rate of other groups. So, either we force them all to get sterilized, or we wait for the “Army of Islam” to arise in our midst and do what Muslims always do, resort to violence. Just see what they are doing in France, Britain and Scandinavia. Fat chance our politicians will do anything until its too late, unless, of course, “We the People” demand otherwise. But, history shows America is always late to the fight. Or, we can do what most Americans are doing, wishfully think we are the exception and Muslims will all of a sudden change and want to co-exist. This is irrational and stupid, but it makes life more tolerable. Knowing that every Mosque in America is conspiring to kill you and yours is terrifying.

3.) Violence: The only thing that is biblical and that 1400 years of history has shown to work is overwhelming Christian just war and overwhelming self defense. Christian Generals Charles Martel in 732 and Jon Sobieski in 1672 defeated Islamic Turks and their attempts to take the West. Who will God raise up to save us this time? Will God even intervene or turn us over to the Muslims for turning against Him?

Cass is right about one thing, Muslims are not about to leave Islam for Christianity despite centuries of bloody effort by various Christian kings and states.

There isn’t much need to highlight the self-evident warped and repugnant nature of the American-Christian-kill-Muslims-brigade. The vast majority of American Christians reject them as imbeciles and I would agree with them that such Christians are in fact “Anti-Christ.”

One fact I want to expose and stress however is the canard that violence in the name of Christianity is a thing of the past. This idea is not only prevalent among Christians but is also propagated by Ex-Christians such as Bill Maher who was recently on Charlie Rose propagating this idea.

Lest anyone forget, there was a whole machine of fervent, zealous Christians who practically worshiped President George W. Bush and were shouting “Halleluja!” and “Glory to Christ!” when he announced that the USA was going to invade Iraq in 2003.

Iraq had zero Alqaeda influence or presence prior to the 2003 invasion. The status of Christians was good, they weren’t a persecuted minority, whereas today the situation is a catastrophe. The pastors, Christian writers and officials who supported and prayed for that war are implicated in the destruction of Iraq and the creation of ISIS.

Gary Cass, who now calls for converting, deporting and killing Muslims is one such hypocrite who is responsible for the creation of ISIS and the destruction of Iraq.

In 2007, Cass was on CNN where he was asked by host Roland Martin, “how would Jesus vote on the war in Iraq?”

According to Cass, Jesus would be all for the Iraq war since it would liberate “his people.”

CASS: Well, I absolutely believe the Republican position is the right one. Self-defense is a duty we all owe to ourselves, our families and our neighbor. And it’s the first duty of government. A strong defense is essential. The Iraq war was justified on the basis of the intelligence that we had at the time. So, self-defense and liberating those under tyranny are Christian virtues just as Christ defends and liberates his people.

Any Christian who supported the invasion of Iraq and now complains about ISIS should be shamed in public and exposed for all to see.  As for Gary Cass, he may be nothing but hot air but he exposes a virulent extremist and radical element that is flourishing on the Christian right.