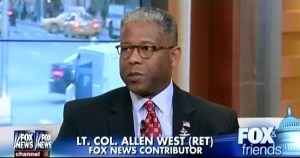 Allen West is at it again, this is the type of incendiary rhetoric that leads to firebombing mosques.

Fox News contributor Allen West believes the Western world should respond to the Ottawa terrorist attack by shutting down “the mosques and Islamic Centers where these individuals are attending” and deporting the imams. West added that closing these places “of so-called worship” is “the only way we send a message into the Muslim communities” that we’re “not going to tolerate these snake pits of sedition.”

West was speaking on the October 23 edition of BlogTalkRadio’s REELTalk. Here’s his reaction to the Ottawa attack:

WEST: But I think, Audrey, the real thing that we’re going to have to do is the mosques and Islamic Centers where these individuals are attending, when they commit these acts, we gotta shut ’em down. We have to send a message. The imam that’s at that mosque or Islamic Center is deported. That place of so-called worship, which is just proselytizing, you know, hate and violence, they have to be shut down. I think that’s the only way we send a message into the Muslim communities here in Western Civilization that we’re not going to tolerate it. We’re not going to tolerate these snake pits of sedition that are, you know, popping up all over the place.

We’re not saying, you know, we start shutting down mosques and Islamic Centers. But the ones who are feeding us these violent jihadists, they need to be the ones that are shut down. Like I said, the imams, the mullahs that are there running these mosques and centers, they need to be deported. Because we have to say, this is, you know, a zero-sum game. We’re not tolerating it.

West is an Islamophobe. He believes that “Islam is a totalitarian theocratic political ideology, it is not a religion. It has not been a religion since 622 AD, and we need to have individuals stand up and say that.” He attacked Rep. Keith Ellison (D-MN), who is Muslim, as representing “the antithesis of the principles upon which this country was established.”

The former Florida congressman has similarly claimed that “Barack Hussein Obama is an Islamist” and “I don’t understand where this president’s loyalties lie, and I have to ask the question, whose side is he on?”

Despite his long history of incendiary rhetoric, Republican candidates and organizations have been using West as a regular surrogate on the campaign trail.