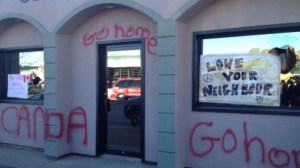 When Mahmoud Elkadri arrived at the mosque in Cold Lake, Alta., early Friday morning, he was met with a disturbing sight.

The words “Go home” and “Canada” had been sprayed across the front face of the building sometime over the night. Vandals had also smashed two of the mosque’s windows.

“When you’re coming in the morning for a peaceful prayer, it is hard,” said Elkadri, who is one of the mosque’s board members.

Only a couple hours later, it was a much different sight. Over the course of the morning, dozens of people from the town showed up to help repair the damage. Some helped paint over the damage, while others taped their own messages to the window reading “You Are Home” and “Love Your Neighbour.”

Cold Lake resident Matt Downey, who came down to the mosque with his daughter to deliver flowers to Elkadri, says he wanted to show that the vandals didn’t speak for the majority of the people in town.

“It’s sad. I mean, these guys are peaceful. I think it is important for the community to show them that we know the difference between extremists and a religion,” he said.

Elkadri said he’s received visits and messages of support from soldiers stationed at the Canadian Forces base in Cold Lake.

“We were crying together in the morning. People coming here, people expressing their feelings,” he said.

Cold Lake Mayor Craig Copeland says the mosque is an important part of the town and that he was disappointed that someone in the community could be behind the damage.

“I just want to say that the Muslim community is at home in Cold Lake, so maybe they need to evaluate whether or not they belong in Cold Lake,” he said of the vandal.

Copeland thinks the vandalism is in response to the shooting in Ottawa that killed Cpl. Nathan Cirillo on Wednesday. He said that people are taking out their frustration on the wrong place.