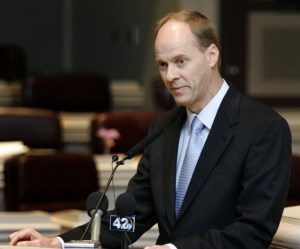 Is common sense making a come back among Christian conservatives?

Next week, Alabama voters will be asked to cast their ballots on Amendment 1, a carefully worded measure that would prohibit “the application of foreign law” in the state’s courts. The ballot initiative is ultimately seeking to ban sharia law, an increasingly popular right-wing legislative tactic that serves to demonize the Islamic faith as something that Americans need to be protected from.

The push to ban sharia law is often spearheaded by prominent Religious Right figures like Pat Robertson and Bryan Fischer. But somewhat of a different scene is playing out in Alabama in the lead up to the election, as Christian leaders in the state are speaking out against Amendment 1.

Randy Brinson, the president of the Christian Coalition of Alabama — one of the state’s largest network of conservative evangelicals — is one of the religious figures lending his voice to the opposition campaign. In an interview with the Birmingham News this week, Brinson said that the effort to pass Amendment 1 is “just silliness,” adding that “it’s all something that lawmakers can trumpet back to constituents that they’re protecting Christian values, but they need to be working on other stuff.”

“Sharia law is not going to be implemented in Alabama, it just isn’t,” Brinson said. “This is a tremendous waste of effort… My frustration is that people — good people — get behind something like this just because they want to score political points with the Christian community. But it’s redundant — you don’t need to amend the constitution to address these issues. I just don’t think they thought through this particular thing.”

Plus, Brinson opposes Amendment 1 because he believes it would communicate to other countries that Alabama doesn’t respect their laws. He also worries the measure could impose additional barriers on people seeking to complete foreign adoptions, get married abroad, or conduct business with colleagues outside the United States’ borders.

And he’s using those messages to rally members of his organization to vote against the ballot initiative. In email blasts sent to the Christian Coalition of Alabama, Brinson urges members to sign a petition against Amendment 1 to “protect Alabama from unnecessary laws” and “protect international adoptions.”