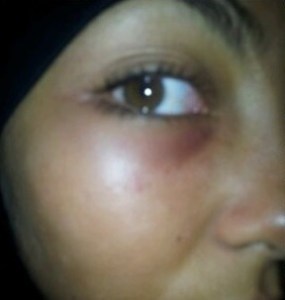 Islamophobe Caroline Fourest claims to be a “Feminist” but it appears her feminism is of the Neo-colonialist variety.

Saphir News has reported that Caroline Fourest – the French “left-wing” Islamophobe who wrote Brother Tariq: The Doublespeak of Tariq Ramadan – has been successfully sued for defamation over comments she made in June last year on the radio station France Culture.

Fourest was responding to the attacks on two Muslim women in Argenteuil, one of whom lost her baby after being kicked in the stomach by her assailants. This followed an earlier incident in which a 17-year-old woman named Rabia Bentot (pictured) was punched and kicked by racists, who also tore off her headscarf while shouting “dirty Arab” and “dirty Muslim”

Instead of Fourest declaring her outrage at the assaults, and her solidarity with the victims, this self-styled feminist expressed scepticism about the women’s accounts.

Fourest claimed that Rabia Bentot was being manipulated by her father and by the Coordination contre le Racisme et l’Islamophobie, assisted by what Fourest described as the “communalist” website Oumma.com, and she suggested that the story of an attack might well have been fabricated. Even if an assault did take place, Fourest asserted, the police had not excluded the possibility that Rabia was the victim of violence by her own family, who could have beaten her up as punishment for living too free a lifestyle.

Needless to say, Fourest offered no evidence whatsoever to back up these disgraceful slurs.

The Collectif contre l’Islamophobie en France comments that for someone who claims to be a feminist Fourest is very selective in her indignation, especially when it comes to Muslim women who wear hijab. The CCIF notes that trying to discredit the testimony of women victims of violence is a well-known phenomenon, and has been vigorously denounced by feminist organisations.

Rabia Bentot sued Fourest for defamation, and last week the Grand Instance Court in Paris ruled in Rabia’s favour. Fourest was fined €6000, half of which was to be paid in damages with the remainder to cover the plaintiff’s legal costs. Fourest has announced that she will be appealing the verdict.