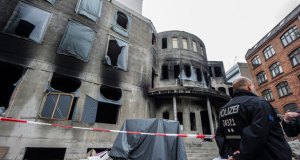 A report released by Parliament’s Human Rights Commission following the burning of three mosques in Germany in August has reached interesting conclusions in its study of Islamophobia in Germany, revealing that the vast majority of perpetrators of such crimes have gone unpunished.

Human Rights Commission President Ayhan Sefer Üstün reported on the comprehensive research carried out in Germany. The parliamentary report states that of the 297 attacks on mosques from 2001 to the present day, 244 (88 percent) of the crimes’ suspects or perpetrators have not been captured. According to the report, “A large portion of these attacks on mosques remain unpunished … opening the way for fear, worry and insecurity among members of the Muslim population.”

The Human Rights Commission, which has previously done research and prepared important reports on the problems of Turks residing in various European countries, decided to carry out the most recent research about attacks on mosques after three mosques were attacked on Aug. 11 and 19 in the German cities of Berlin and Bielefeld.

The commission, preparing its report with the help of the Turkish community and in the light of meetings with officials of the German government, found shocking evidence in its inquiry into the mosque attacks in.

The report cites figures published by the German government, noting that in the 13-year period from 2001 to 2014 there were 297 attacks on Muslim places of worship. It further notes that in 88 percent of these cases, those alleged to have performed the crime were not arrested. According to the same data, while the monthly average until 2011 was one or two attacks, in more recent years this rate has risen to three a month.