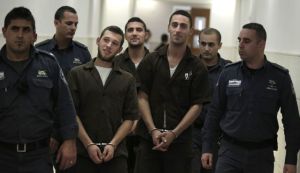 Three members of a right-wing religious Jewish group have been charged in Jerusalem District Court of allegedly setting fire to and vandalizing the Max Rayne Hand in Hand bilingual school in Jerusalem last month.

The three young men – activists in the Lehava organization, which fights intermarriage – were charged Monday with arson, breaking and entering, and destroying property at the school, because Jewish and Arab children study there.

They were allegedly acting in keeping with their mission to battle assimilation and coexistence, according to the charge sheet, “after it became known to the accused that there had been a memorial ceremony for [the late Palestinian leader] Yasser Arafat a number of weeks previously, on the background of the terror attacks in the city and with the aim of committing an act that would resonate in the media.”

However, officials at the Hand in Hand school assert that no one could have had any information about such a ceremony, since one was never held at the school or by the members of its greater community.

“Such a claim may have been made during their interrogation, making its way into the charge sheet, but there is no truth to it,” said the school sources.

The sources added that “the fingerprints of the arsonists who defiled the school’s walls with their racist and hateful slogans left no doubt as to the motive for the attack. We insist that this error be rectified immediately lest it serve as a pretext for the next attack.”

The Jerusalem District Attorney’s office has asked that the three suspects – Yitzhak Gabai, 22, of Jerusalem, and brothers Shlomo and Nahman Twito (20 and 18, respectively) of Betar Ilit – be held in custody until the end of legal proceedings.