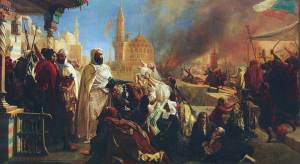 Jan-Baptist Huysmans’ painting of Abd el-Kader saving Christians during the Druze/Christian strife of 1860.

If only there were more Abd el-Kader’s today.

With radical Islam once again dominating the news, this time in France, it is important more than ever to know about the Islam of a great human being who was a Muslim and an Arab: Emir Abd el-Kader al Jazairy, the 19th-century military leader, peacemaker, reconciler, holy man, philosopher and statesman whose conduct, on and off the battlefield, remains an ever more relevant model of courage, compassion and chivalry. 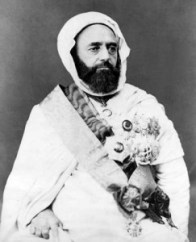 Abd el-Kader was born in 1808 in the Ottoman province of Oran, today’s western Algeria. His tribe, the Hachem, was dedicated to the study of the Koran, the traditions of the Prophet Mohammed and the settlement of disputes among the tribes. In the decades that followed, Abd el-Kader became admired from the Great Plains to Moscow and Mecca, not as a scholar but as a chivalrous David who united tribes under his leadership to resist the French Goliath who invaded Algiers in 1830. Algerians consider him to be their George Washington.

Like his contemporary, Robert E. Lee, he also knew when further resistance was a futile waste of life. Yet he won honor in France as an uncompromisingly stoic prisoner who forced its government to keep a pledge to grant him passage to the Middle East after he surrendered voluntarily in 1847.

During these years Abd el-Kader’s name would be given to a settlement in the Midwest (today Elkader, Iowa), to a champion race horse (Little Ab) in Ireland and a ship built in Newburyport, Mass. Ralph Waldo Emerson praised him as a model of reconciliation, Britain’s William Thackeray would dedicate poetry to him and his name would be placed on the presidential ballot by citizens of Bordeaux even as he remained a prisoner of the French government.

Liberated by Napoleon III in 1852 and living in Damascus under a benevolent French patronage, Abd el-Kader protected thousands of Christians during a Turkish-inspired pogrom intended to punish them for not paying the head tax. Queen Victoria and Abraham Lincoln were among the many heads of state to honor the emir’s humanitarian intervention. Upon his death in 1883, the New York Times eulogized, “. . . The nobility of his character won him the admiration of the world. . . . He was one of the few great men of the century.”

His life reminds Muslims that true jihad, or “holy exertion,” lies not in the zeal of bitterness to fight at whatever the cost, but in living righteously in accordance with Divine Law.

Unlike ISIS and al-Qaeda, Abd el-Kader treated his French prisoners respectfully, according to Islamic rules of warfare. These prohibit the destruction of nature, shooting someone in the face, mutilation of dead bodies, killing of women and children, priests and monks, rape and the mistreatment of prisoners. The emir ended the centuries-old desert custom of decapitating prisoners after they surrender. Accustomed to having the plunder distributed according their enemy headcount, the emir countered the angry protests of his soldiers by offering bounty payments for prisoners brought in unharmed. A soldier guilty of mistreating prisoners received a “reward” of 25 strokes with a cane on the soles of his feet.

During a life of struggle against French occupation, despair in prison and exile in foreign land, he never allowed the demons of hatred and revenge to trump compassion and forgiveness. The emir’s life story offers an alternative narrative about Islam, one that has been embraced by mainstream scholars today from New York to London, Lebanon and Turkey to Pakistan and Malaysia.