By Emperor on February 27, 2015 in Feature, Loon Politics, Loon-at-large

The Israeli embassy in France and Elad Ratson, its Director of PR (Public Relations) have threatened websites and bloggers, among them, Al-Kanz, (a website that’s previously tipped us to Islamophobia in France) with a Gaza style bombing. (hat tip: MuslimMatters)

The image created by Israel embassy website (coolisrael.fr) and shared by its PR man: 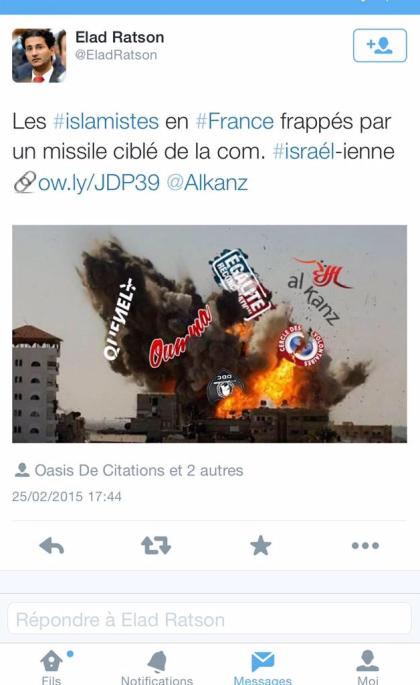 By @EladRatson: “Islamists in France struck by a targeted Israeli strike”

Al-Kanz and its founder Fateh Kimouche have been targeted by many who want to see the website shut down. French blogger Olivier Pechter writes:

Hassen Chalghoumi, « moderate imam », with links to radical zionist organisations, has asked the Israeli government to take down his website (july 2013).

Frederic Haziza, journalist for the radical right wing Jewish « Radio J » radio station and French public TV station LCP, interviewing Jean-Christophe Cambadelis (leader of the socialist party) asked, earlier this month and in the aftermath of the killing that took place in a kosher store, how we should put an end to online « holocaust denying and antisemitic campaign » on the net, naming Al Kanz among the « bad guys » A crude lie : Al Kanz, let’s repeat it, has condemned clearly antisemitism and criticized those of his fellows that support bigot comedian Dieudonne M’Bala (2010, 2014). Nevertheless, Kanz « kept calm and carried on »

Pechter notes that the threats have continued and now you have Israel’s French Embassy getting involved in upping the ante.

coolisrael.fr, a website edited by the Israeli Embassy, wrote an article called « Islamists in France struck by a targeted missile from Israeli PR ». The so called missile is « symbolic » and refers to a stereotyped Hasbara video that was largely mocked on social networks these last days: « to which side do you belong ? ».

This is all in the backdrop of a new Hasbara (propaganda) campaign initiated by the Israeli Embassy in France that seeks to counter perceptions of Israel as uncool, murderous and suffocating of the Palestinians.

In doing so they think it is joyous to show a missile striking Gaza and creating a giant cloud of flames and debris, including no doubt human limbs and charred bodies.

This is a week when the Israeli Embassy in France launched on YouTube and Facebook a campaign entitled ” Whose side are you on? “against fundamentalism and Defence of Democracy (video shown at the end of article). Real missile targeted to Islamists but also anti-Semitic and anti-Zionists of all kinds, this Israeli communications campaign is a big hit. She made ​​the buzz on social networks and the numbers reflect this success. 78,994 views on YouTube 709,665 views and 1,748,480 people on Facebook Our article on this video has also become one of the most read and shared the month with more than 2600 shares…. (coolisrael.fr)

The Israeli embassy and its spokesman think the usage of such imagery to make their point is going to win them sympathy and support. Somehow they have also translated the number of views and shares into a victory, even though most are the result of their video being parodied and lampooned.

According to Pechter the websites targeted are not all of the same stripe but Eldad and the Israeli Embassy wish to conflate them all together in an attempted delegitimization.

Among other websites (two far-right antisemitic websites and Oumma.com, most visited Muslim website, known for his opposition to Muslim Brotherhood), we can see Al Kanz logo broken in two. At first sight, the picture (Gaza attacked) is, at the same time disgusting and childish. But it has to be taken seriously in a country with already so many « tensions » as France. 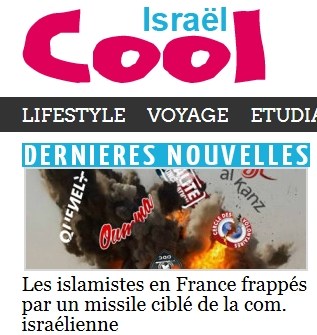 After Al-Kanz called out both the Embassy and Elad Ratson they removed the links from their social media but have not removed the article from the website, nor have they apologized.

The article was promoted by the embassy on social networks. When it provoked a « twitter battle » between Al Kanz and Israeli PR director, they withdrew the links, but not the article. Nor did they apologize.

The embassy is also directly connected to France’s chapter of StandWithUs: 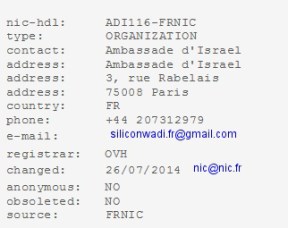 Whois registar of coolisrael.fr « siliconwadi.fr », another website edited by the Ambassy 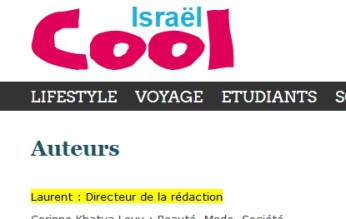 Interestingly after we tweeted @EladRatson about his message of hate, he blocked us: 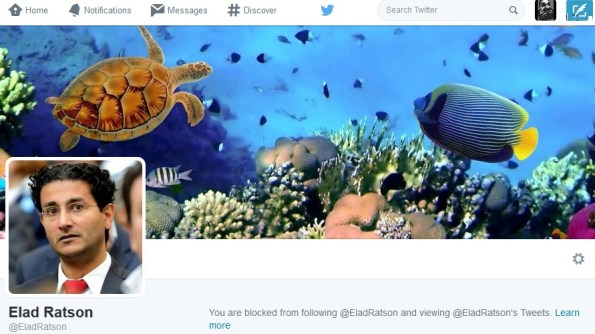 He wants you to know that despite happily posting articles with pics of indiscriminate bombing and then sharing them all over the media he is really cool and Israel is cool because he really loves sea life and coral reefs.