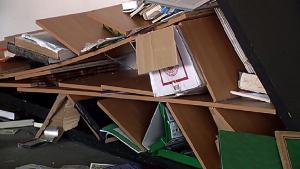 Via. NBC Washington, By Mark Segraves and Chris Lawrence

The FBI is now involved after a DC mosque was vandalized twice in less than a week.

The Ivy City Mosque in the 2000 block of Gallaudet Street NW was first ransacked Monday night. Mohammed Mobaidin, the director of the mosque, said the damage was minor. Police had decided it was not a hate crime, because another vandalism was reported nearby around the same time.

Another vandalism was reported late Wednesday night or early Thursday morning at the same mosque. According to Mobaidin, vandals ripped religious hangings from the walls and broke furniture; a picture of the sacred Kaaba was stolen.

“Now that this picture is missing, I’m beggining to think it could have been a hate crime. That picture has value to the Muslims,” Mobaidin said.

“Something is wrong there, detectives will give us answers,” Nihad Awad with the Council on American-Islamic Relations (sic.CAIR) said.

The mosque had been unlocked and open to the D.C. community for 17 years.