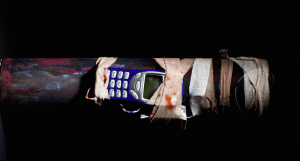 A 67-year-old Marietta, Georgia man is accused of planting a backpack containing two pipe bombs in an Atlanta-area public park in order to frighten the public and sow fear of Islamic terrorism.

According to Atlanta’s Channel 2 News, conservative “patriot” Michael Sibley confessed to police that he was trying to educate people that terror strikes can happen anywhere and without warning when he planted the bombs last November.

The backpack contained two partially-constructed pipe bombs, a Koran and a list of “soft targets” for terrorist attacks — i.e., non-military, unguarded structures like hospitals and schools. Among the list of potential targets was an Atlanta Jewish center.

Channel 2 quoted Sibley’s arrest report, which reported that he “(s)tated that he is a ‘patriot’ and he felt no one was paying attention to what was going on the world. Sibley felt if he placed the package in a Roswell park then people would finally get that this type of activity could happen anywhere.”