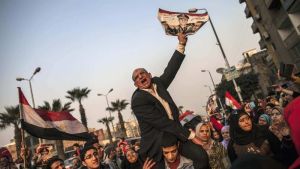 A must read article by the scholar Khaled Abou El-Fadl. While it details the dire state of things today, the various countervailing and absurd forces that have brought us to the current predicament, he ends his article on a surprisingly prosaic and hopeful note about the inevitability of hurriya.

Yet all those who bothered with the pretence of sympathetic sorrow over the blood of the thousands of martyrs who died dreaming of hurriyya should not feel too self-assured. Hurriyya is the natural order of things, and like life itself, it will inevitably sprout again. It could sprout even in the restless heat of the summer, the warm docility of the fall, or the quiet surrender of a very cold of winter.

Ever since the French landed on the shores of Egypt in 1798, we have been in the grip of a past alienated from its history, an identity divorced from its memory, and insecure flashes of pride defeated by a deep sense of indignity.

Then came the Arab Spring!

So many thought the Arab Spring would allow the region self-determination, and would shift the gaze of the world away from the twin spectres of oil and Israel. Perhaps the world would finally gaze upon Arabs without racism and Islam without bigotry.

The Arab Spring was a resounding protest against everything, from the corruption of the West’s corporate cronies – who exploit the region’s natural resources so that they can enjoy the latest luxuries their colonial masters have to offer – to the foreign occupations and humiliations heaped upon all those who dared to think that they had a right to resist.

The Arab Spring was about this magical word, hurriyya, which means different things to different people – but at a minimum, it means freedom from oppression, exploitation, corruption and a servile existence.

But the Arab Spring was like a foetus in an abortion clinic; it never had a chance.

Why was the Arab Spring aborted? Because a democratic Middle East would have been a poor habitat for the survival of the parasitical military regimes and putrid oil sheikhdoms, which relentlessly eradicate any healthy space for the development of civic institutions that can cultivate and nurture the growth of civic values. Those regimes cannot afford to rule over citizens. They can only rule over slaves.

The truth is that with the failure of the Arab Spring, so many politicians and intellectuals in the West and the Arab world breathed a sigh of relief. Why? Because the danger of so-called political Islam had been averted. And indeed, so many pundits gleefully declared that the phenomenon of political Islam was finally dead.

In Egypt, the largest Arab country, what ensued had become a familiar and repetitive pattern since colonialism: in the name of modernity and progress, the state went into an ultra-repressive mode, persecuted Islamists, banned Islamic parties and declared war on all expressions of Islam that it deemed political. Abdel Fattah El Sisi even equated political Islam with terrorism, and in an interview with a French newspaper, when asked to comment on Hamas, Sisi responded that political Islam in all of its permutations and forms are one and the same.

This was only a harbinger of what was to come: Egypt has now formally declared Hamas a terrorist organization, but apparently, as far as Sisi is concerned, Netanyahu’s government – with its war crimes and ongoing unlawful occupation of Palestinian lands – is kosher.

By now, it is beyond dispute that Saudi Arabia, UAE and Kuwait bought themselves a counter-revolution in Egypt, Yemen and Libya. These countries formed a reactionary alliance to intervene wherever they can to restore the morally defunct and corrupt old order. In each case, they flooded the hopelessly corrupt cadres of the military officers with enough cash to buy proxy agents capable of expressing the egotistic anxieties of despots.

Instead of hurriyya and freedom, all of the focus now is on fighting terrorism and maintaining stability and security, which, in the case of the aforementioned countries, is a superficially coded way of saying: Don’t dare dream of self-determination and autonomy, because political Islam is the ever-present boogeyman ready to return you to the dark ages (‘usur or ‘uqud al-zalam) once again!

If this exclamatory warning is hopelessly confusing, then welcome to the madhouse. Have the military juntas and sheikhdoms ruling the Arab world since colonialism taken the region out of the dark ages in the first place? What precisely is the current blissful state of enlightenment that Muslims are at risk of losing to the political Islamist hoards, and what exactly are the blessed fruits of the praetorian states and the oil sheikhdoms that the barbarians at the gates are threatening to usurp from the post-colonial Arab?

But, even more fundamentally, what is this political Islam that is equated with reactionism, the dark ages and barbarism and terrorism?

Islam, its doctrines, symbolisms and linguistic constructs, are persistently utilized by the Gulf States to legitimate and maintain themselves in power. The exploitation of religion as a means to keeping a conservative and exploitative elite in power is a staple of everyday life in the Gulf countries. Every one of those countries carefully nurtures and maintains a class of clergymen with religious institutions that function as a conservative legitimating force safeguarding the status quo, which includes the exploitative use of foreign workers, and a hyper-form of Gulf nationalistic elitism.

This Islamized and oddly pietistic Gulf nationalism often manifests itself in highly racist and ethnocentric ways, deep seated social and political inequities, entrenched patriarchal institutions, and unabashed political despotism and authoritarianism. Critical to this dynamic is that the state carefully defines, regulates and dictates religious expression and orthodoxy. Religion is also exploited to further state policies, such as antagonism towards Shi’i Iran and other Shi’i allies.

Even Sisi of Egypt, who plays the role of the protector of secularism in the region, allows for no expression of religious values outside the sphere defined and controlled by the state. The state controls which places of worship are built and where, and in the case of Islam, also what can be said in mosques. The state controls what Muslim clergy may say on their podiums and relies on Azhar state-salaried clergy to defend its legitimacy and Islamic orthodoxy in the face of any dissent. All the Islamic charitable endowments that exist in Egypt have been placed under state control and have been plundered by corruption and nepotism. Incidentally, thanks to the precedent established by colonial powers, the Coptic religious endowments remain under the private control of the church.

Not only did Sisi secure the support of the Azhar and Coptic church before the coup in July 2013, but before the massacre of Raba’a al-Adawiya mosque, he brought in a line-up of clerics to lecture the army officers that Islam mandates the removal of democratically elected governments and that whether they do the killing or be killed, in both cases, they are honoured and blessed in the eyes of God.