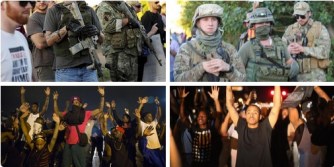 Of the numerous protests that have been taking place across America the most notable has been the Black Lives Matter movement, which originated as a response to the systemic police brutality directed towards Black Americans. Of course, this serious social issue was completely ignored in a recent protest outside of a mosque in Phoenix, Arizona; wearing shirts that stated, “F*ck Islam,” armed protesters gathered outside the Islamic Community Center of Phoenix.

In the manifesto of the protest, the organizers stated, “Our enemy, that we are taking a stance against, is the precepts of sharia law and all it entails.” The protests in Phoenix included a contest in which participants drew derogatory and inflammatory pictures of the Prophet Muhammad. During a CNN interview with host Anderson Cooper, the protest organizer, Jon Ritzheimmer stated that he was motivated by not wanting to live in fear for his life, and that his children deserved a future.

​Yet what was the source of this man’s fear? Was he worried that police officers would mistake his children for criminals and shoot them? Was he concerned about living in a ghetto created by a history of racist housing policies? Or was he worried about being pulled over while driving because of his skin color? No, racial profiling and being pulled over without probable cause were not the source of his fear; he was concerned about the spread of “Sharia law” from Muslims, and believed it was time to take a stand against Islam and Muslims.

​Who should really be afraid—Blacks, who are still battling the continued legacy of racist laws (Black code and Jim Crow laws), which cause tangible problems in many areas of their lives and threaten their safety, or a protestor who is worried about Sharia being instated? The man was protesting something that hadn’t even happened!

​It has become common in Islamophobic discourse for individuals to express fear over the possibility of Sharia being imposed upon them, as if it is some sort of imminent existential threat to the so-called “free, enlightened world.” Yet history shows that African Muslim slaves—many of whom were scholars of Islamic law—were the ones harmed by dangerous laws (which were Eurocentric).

​In her book, “Servants of Allah: African Muslims Enslaved in the Americas,” Sylviane A. Diouf notes that enslaved African Muslims entered into “a White Christian world determined to wipe out any trace of ‘paganism’ or ‘Muhammadanism.’” At the time, corporal punishment was a possible consequence of the open expression of the Islamic faith, resulting in Muslims keeping their faith as secretive as possible.

Diouf concludes, “All the conditions were thus present for a rapid disappearance of Islam in America, or even for its non-emergence.” Due to the strong persecution of Islam, its African adherents were robbed of the ability to pass their faith on to their descendants.

​Despite this, African Muslims attempted to preserve the core tenets of their faith. The first texts produced in America on Islamic law were created by an enslaved African, Bilali Muhammad, in Sapelo Island, Georgia. The Bilali document simply informed other enslaved Muslims of their various religious duties, such as purifying themselves before prayer, how and when to pray, and when to fast. Bilali Muhammad never had a hidden agenda to impose Sharia, not even when he fought in the War of 1812 on America’s side against the UK.

​The narrative of the slave Omar ibn Said recounts the horrors of the transatlantic slave trade. He was forced to obey a cruel master, who punished him harshly for open expressions of his Islamic faith, including merely kneeling to pray. This persecution led to a newspaper boasting that a “Mohammedan” had converted to Christianity; yet contemporary research suggests that his conversion to Christianity was merely a survival strategy.

Later, when Omar ibn Said was much older, he wrote that he had largely forgotten his native tongue, as well as how to write Arabic in a grammatically correct manner, which was most likely due to lack of use. A fundamental part of his heritage had been robbed from him due to the imposition of Eurocentric law, which prevented him from using his own language and freely worshiping as he chose.

​It is ironic that, having such a history as the foundation of the United States, descendants of those who created such a cruel social system are now expressing fear regarding the possibility of Muslims imposing Sharia. Enslaved African Muslims had Eurocentric law violently imposed upon them, and have never imposed Sharia law upon non-Muslims.

The Global Imposition of Eurocentric Law

​Continuing with the theme of laws being imposed on peoples, take another actual instance of imposition: post-Enlightenment France actually colonized a Muslim society in Senegal while massacring local Islamic scholars. The French passed laws forbidding Muslims from making Hajj, which is a fundamental tenet of the faith. Contradicting the modern perceptions of Muslims as “violent terrorists,” the Senegalese Islamic scholar Ahmadou Bamba urged Muslims to engage in a pacifist struggle that included fasting and praying. Yet this was threatening enough to the French that they exiled Ahmadou Bamba. Today, he has over 3 million followers, far surpassing the devotees of various violent movements in the Muslim world.

​As with other law systems, Sharia is open to atrocious misuse and abuse as has been manifested in its application by modern extremist groups. Islamophobes associate Sharia with the Taliban, although their ranks consist of war refugees who are largely uneducated in Islamic law.

​Rather than denying women the right to an education, in Sokoto (a pre-Colonial West African society), a female scholar of Islamic law named Nana Asmau initiated a mass-education campaign for women. She cited Aisha bint Abu Bakr, the wife of Prophet Muhammad, as an influence. Nana Asmau was a scholar of Islamic law and issued fatwas, such as one that declared the usage of tobacco as Haram (forbidden).

​Historian Jean Boyd declares that within Sokoto, “To deny women equal opportunity to develop their God-given talents was to challenge God’s will.” Nana Asmau is lauded even by non-Muslim African feminists, and is considered to be the precursor of modern feminism in Africa—even though she was a Muslim woman with an Islamic worldview.

​How did this society in which women had freedom to pursue knowledge end? By the colonialism of the British Empire, which imposed Eurocentric laws upon the indigenous people. While Islamic law in West Africa permitted women to have property rights, the British Empire’s law denied women this right, despite supposedly being a more “advanced” society!

​Throughout West Africa, Muslims were ruthlessly subjugated by a variety of repressive Eurocentric laws that forbade them from openly practicing their faith. In America, enslaved Africans had even stricter laws—they were denied the right to read or write, and as the women were considered property, the slave masters were free to rape them at will without penalty—and were systemically prohibited from passing Islamic teachings to their descendants.

​After slavery was abolished, Black code laws and the subsequent Jim Crow laws solidified White Americans’ place at the top of the social hierarchy. Even now, the legacy of years of discrimination remains. This is demonstrated by the fact that Black Americans are more likely to be victims of police brutality and racial profiling, and are more likely to live in impoverished neighborhoods.

​Protesters who have the time to organize themselves and protest outside of a mosque to express a fear about a foolish belief that Sharia is going to take away their rights need to learn about the very real problems of the world, including the systemic, structural racism that exist as a legacy of Jim Crow laws.

​These White men who protested about something that has not happened and enjoy White privilege have no idea what it’s like to be discriminated against based on race. Perhaps this supposed fear of Sharia is really a big distraction to prevent people from addressing the real serious issues: the legacy of Black code Jim Crow laws, which are interfering with citizens’ lives even today.

About the Author: Hakeem Muhammad is a 20-year old African-American Muslim who currently studies political science at West Georgia University. God willing, in the future he plans to study Islamic theology and be a positive force for social change. You can find him at his website www.hakeemmuhammad.com and on twitter at @hakeemtheroots.

-Servants of Allah: African Muslims Enslaved in the Americas, by Sylviane A. Diouf, award-winning historian.

-A Muslim American Slave: The Life of Omar Ibn Said(Wisconsin Studies in Autobiography)

-Law as a Eurocentric Enterprise by Kenneth B. Nunn