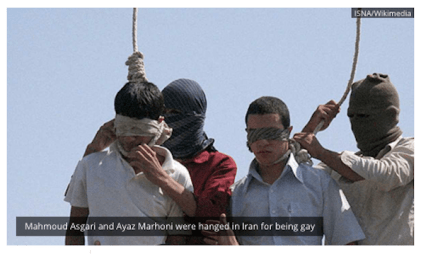 A must read on lies and how the media/activists will push them. (h/t: J)

Everybody on earth knows that last week a deal on Iran’s nuclear program was announced.  Everybody also knows that this apparent step toward peace launched a new stage in an old war: of propaganda. Proponents praise the possibility of a historic opening. Opponents — who include Israel, Saudi Arabia, and the Republican Party — warn of disaster.  Both sides want to expand their constituencies. In Western countries, gay communities — small but politically influential — are more and more the target for just this courtship and recruitment.

The right-wing pundit Amir Taheri greeted the nuclear deal with a storm of tweets and screeds condemning it. One 140-character charge drew special attention. 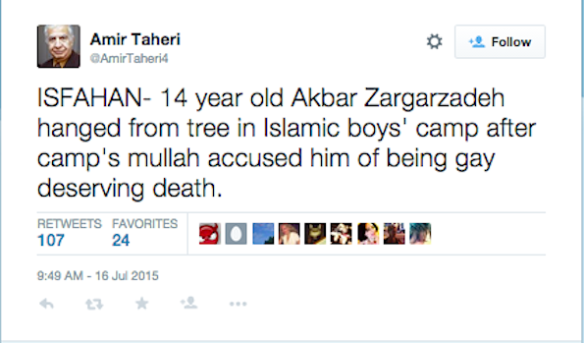 Anyone’s first reaction would be some version of “My God.” It sounded horrible.  I wrote to Taheri asking for more information — and so, judging from Twitter, did at least three other people.

But the story quickly began to show cracks. Taheri didn’t reply to me, or anybody. I sat down that night with a Farsi-speaking friend and began searching for the story in the Iranian press: under the youth’s name, under various other key words. It didn’t turn up anywhere. I wrote to the Toronto-based Iranian Queer Organization (IRQO), a diaspora-based group of LGBT Iranian activists with which I’ve worked closely over the years. They searched the media as well and found no sign of it. They also reached out to contacts in Isfahan. On Friday morning, they told me no one there had heard of the story, either. 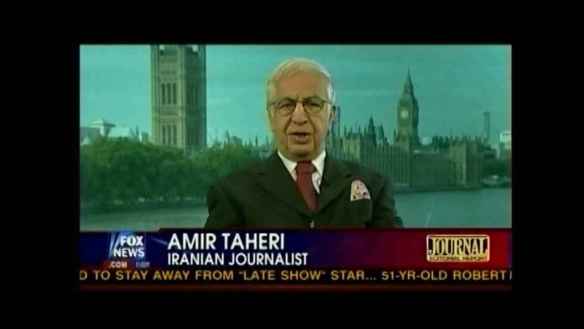 Amir Taheri lies a lot. Eight years ago, Jonathan Schwartz called him “one of the strangest ingredients in America’s media soup,” adding, “There may not be anyone else who simply makes things up as regularly as he does, with so few consequences.” An arch-conservative protege of the Pahlavis, an editor of the Tehran daily Kayhan under the Shah, he repeatedly fabricates stories about Iran to please right-wingers in his adoptive West. Most famously, in 2006 he claimed in Canada’s National Post that a new dress-code law in Iran would impose special clothes on religious minorities, including yellow badges for Jews. Many conservatives swallowed the story; even the Canadian Prime Minister repeated it. But it was a complete falsehood, and after a huge furor the National Post retracted it and apologized: “It is now clear the story is not true. … We apologize for the mistake and for the consternation it has caused.” (The Post also noted that Taheri went “unreachable” after his fiction was exposed, rather as he did on Twitter.) Undeterred, in 2008 Taheri concocted a quote from Ayatollah Khomeini, complete with a fake citation of an invented source; American neoconservative luminaries duly repeated it. In 2002, Taheri claimed that “Osama bin Laden is dead …. the fugitive died in December and was buried in the mountains of southeast Afghanistan.” The list of his duplicities goes on and on. In 1989, an academic reviewing one of Taheri’s books

detailed case after case in which Taheri cited nonexistent sources, concocted nonexistent substance in cases where the sources existed and distorted the substance beyond recognition when it was present. … [The reviewer] concluded that Nest of Spies was “the sort of book that gives contemporary history a bad name.”

Larry Cohler-Esses condemns Taheri as a “journalistic felon,” part of a “media machine intent on priming the public for war with Iran.”

There are ample grounds for skepticism about stories Taheri spreads.

But skepticism doesn’t make headlines. Propaganda’s best friend is the ambition of the press. On Thursday, a reporter for the UK-based Gay Star News also tweeted to Taheri. 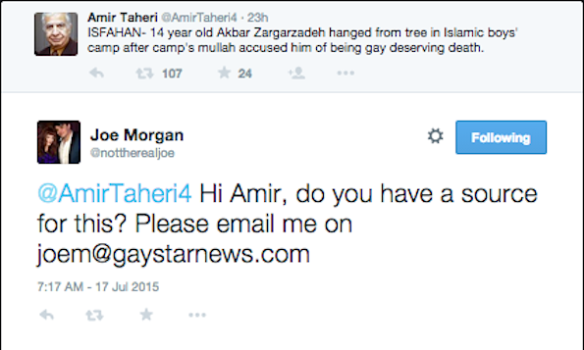 Taheri didn’t answer him, either. I know this because the reporter didn’t wait for a source. About 25 minutes later, his story — “GAY TEEN, 14, ‘HANGED FROM TREE’” — topped the website of  Gay Star News, and it said Taheri hadn’t told them anything. In other words, their entire account was based on one single tweet with no evidence behind it. This tweet was special, though. The topic of gay killings in Iran has shown its passionate drawing power over a decade, its ability to keep queers clicking. GSN wanted the clicks for itself.