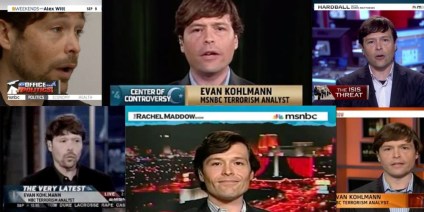 Evan Kohlmann is the U.S. government’s go-to expert witness in terrorism prosecutions. Since 2004, Kohlmann has been asked to testify as an expert about terrorist organizations, radicalization and homegrown threats in more than 30 trials.

It’s well-paying work — as much as $400 per hour. In all, the U.S. government has paid Kohlmann and his company at least $1.4 million for testifying in trials around the country, assisting with FBI investigations and consulting with agencies ranging from the Defense Department to the Internal Revenue Service.  He has also received another benefit, Uncle Sam’s mark of credibility, which has allowed him to work for NBC News and its cable sibling, MSNBC, for more than a decade as an on-air “terrorism analyst.”

Kohlmann’s claimed expertise is his ability to explore the dark corners of the Internet — the so-called deep web, which isn’t indexed by commercial search engines — and monitor what the Islamic State, al Qaeda and their sympathizers are saying, as well as network the relationships among these various actors. Kohlmann doesn’t speak Arabic, however, and aside from a few days each in Saudi Arabia, Jordan, Dubai and Qatar, has hardly any experience in the Arab world. Kohlmann’s research is gleaned primarily from the Internet.

Indeed, Kohlmann is not a traditional expert. Much of his research is not peer-reviewed. Kohlmann’s key theory, to which he has testified several times on the witness stand, involves a series of indicators that he claims determine whether someone is likely a homegrown terrorist. Yet he has never tested the theory against a randomly selected control group to account for bias or coincidence.

For these and other reasons, Kohlmann’s critics describe him as a huckster.

Kohlmann’s works are “so biased, one-sided and contextually inaccurate that they do not provide a fair and balanced context for the specific evidence to be presented at a legal hearing,” said one terrorism researcher.