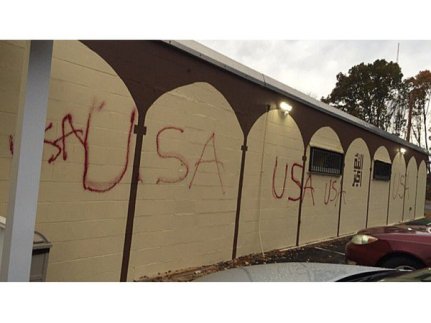 A mosque in Burlington, Massachusetts has been vandalized for the second time. Perhaps the culprits have bought into the idea that mosques are “unAmerican” hence they decided to spray-paint “USA” on the mosque walls. On the other hand maybe they thought the congregants of the mosque needed a helpful reminder that there are still bigots in the neighborhood.

A mosque in Burlington was vandalized overnight.

Vandals spray-painted “USA” repeatedly on the exterior walls of the Islamic Center of Burlington.

The Massachusetts chapter of the Council on American-Islamic Relations, which posted photos of the graffiti online, says it was discovered early Sunday morning.

In a statement, the group suggests the graffiti reflects growing anti-Islamic sentiment that Muslim are not “real” Americans.

Police say they are looking for to men who were driving a white Ford Crown Victoria early this morning. They believe two white men were involved.

Police say the suspects were in the area for at least 20 minutes before driving away.

This is the second time the mosque has been vandalized in the past two years. Another group of vandals also spray-painted the word “USA” on the mosque back in 2013.