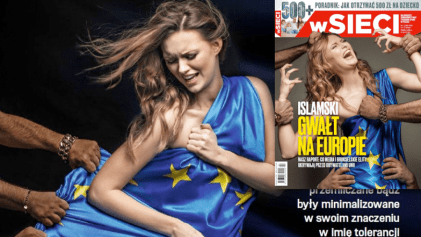 What was once old is new again. A Polish newsweekly that is popular on the right-wing published a racist magazine cover reminiscent of European fascist, xenophobic illustrations of the past. Poland has seen quite a number of Islamophobic and hateful events the past year, including a massive Islamophobic march in November but “The Islamic rape of Europe” cover line really takes the cake.

A popular right-wing Polish newsweekly, wSieci or “The Network,” published a deeply provocative magazine cover this week. It shows a young blonde woman, garbed loosely in the flag of the European Union, being groped by three men. Only the six swarthy arms and hands of the assailants are in view, but the message is clear and barely needs the brutal cover line: “The Islamic rape of Europe.”

According to the Daily Mail, the Polish magazine said it was focusing on “what the media and the Brussels elite are hiding from the citizens of Europe.” An editorial in its pages, entitled “Hell Europe,” inveighed against a culture of “tolerance and political correctness” that supposedly led to the grim scenes on New Year’s Eve in the German city of Cologne and other northern European town centers.

Groups of men, many apparently of Arab or North African descent, went on a shocking criminal rampage that led to hundreds of complaints to the police of rape, sexual harassment and other abuse. The incidents fed into an already growing backlash against European policies welcoming migrants and refugees, particularly an influx from war-torn Syria.